At the BillerudKorsnäs works in Frövi and Rockhammar, trials are currently underway to make use of the organic material in waste streams to produce biogas. For the plant, this would mean dramatic reductions in electricity costs and reduced carbon dioxide emissions.
The water bubbles and fizzes as 27 large surface aerators swirl round the 30-degree water in the aeration tank. The aeration of the water aids biological decomposition of the organic material into carbon dioxide and water. The micro-organisms create a sludge that sinks to the bottom, and the water is purified.

Photo credit: Charlotte Perhammar“We have always been at the forefront, environmentally speaking, and we won an environmental award back in 1972 when we built our biological tanks,” says production engineer Thomas Särnholm, who welcomed us to the BillerudKorsnäs works in Frövi.

The aeration tank is one of many steps in purification at the cardboard factory. The water must go through several steps before it is released into the lake Väringen, which connects directly to the lake Mälaren.

“We have strict requirements for the treatment; this water will be drinking water for the people of Stockholm,” Mr Särnholm says.

The biological sludge that forms during water purification is used – and works admirably – for soil enrichment.

But now researchers and engineers at Linköping University’s Department of Thematic Studies - Environmental Change, and Scandinavian Biogas Fuels and Pöyry Sweden – together with the plants themselves and equipment suppliers – want to know if it would be profitable to make even better use of the sludge.

Through breaking down the organic matter in a biogas reactor, large amounts of biogas – which can replace fossil fuels in the production of cardboard – are produced. The amount of organic material that has to be broken down during the purification process can then be reduced by 50%, which means a substantial reduction in energy consumption during water treatment.

“A pilot reactor has been moved here from Skärblacka where the initial tests have yielded favourable results. The trials here at Frövi will go on through the end of the year,” explains Björn Magnusson of Scandinavian Biogas Fuels.

“By adding nitrogen and phosphorus, we can control the process and regulate the amount of biogas that is formed when the sludge is broken down in a biogas reactor.”

“We want to know more about what effect the natural variations in cardboard production have on the sludge," Mr Magnusson says.

At the Rockhammar works, CTMP pulp is produced. It is used in the centre layer of the cardboard made in Frövi.

When the demand for white cardboard is particularly high, the pulp is bleached and chemicals are added, which requires a few extra steps in purification.

“We bleach about 20% of the CTMP pulp, and the rest is unbleached,” explains Robert Carlsson, head of production at the Rockhammar works.

This is where the pilot reactor – specially adapted for large flows of water containing relatively little organic material – is located. The researchers are testing the treatment of the waste before each stage of the process.

We are testing a waste stream with high potential for biogas extraction, but which is also more challenging because of the chemical residues in the water. If we can get this to work it will mean big profits for the factories,” explains Annika Björn, researcher at the Department of Thematic Studies - Environmental Change. 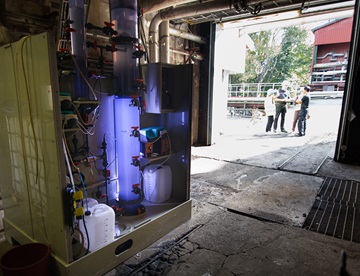 “If we can make biogas from the organic material in the water, we can take out about half the material; this halves the amount of biotreatment needed, and halves the need for aeration and chemicals. The gas can be used to replace fossil fuels. The result will be both dramatically reduced electricity costs and an opportunity to increase production capacity.”

The technology has previously been tested with positive results, both in the laboratory at the Department of Thematic Studies - Environmental Change and at the Ortviken works. The trials will continue through the end of the year and the waste from the bleached pulp will come every six weeks as production of unbleached and bleached pulp goes in cycles.

“It will be exciting to see what effect the change will have on biogas production,” Mr Truong says.