From LiU to solidarity economics in Managua

Last summer, Klara Friman graduated with a master’s in Design and Product Development, and up until the middle of March this year she will be working as a ‘We Effect’ trainee in the Nicaraguan capital Managua. 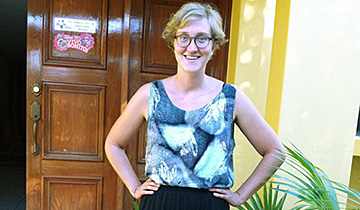 “It’s an alien concept to us. In Sweden there’s no discussion: we eat the food we want, regardless of the season and regardless of what it costs to produce. Here in Managua you are told that you can’t buy avocado and mango now; you have to wait until it comes into season. Many people are also urged to eat what they can grow themselves or can afford, usually beans,” Ms Friman explains.

Nicaragua is Central America’s poorest country, with 44% of the inhabitants living below the poverty level. Many of these are small-scale farmers; despite the fact that they produce food themselves, pressed by the multinationals, they use half their income or more on food. Food sovereignty means that people choose themselves what they want to produce on their own land and also have sufficient income to survive.

The concrete task is to develop a graphic profile and a communications strategy.

“The members of PECOSOL arrange training and workshops about solidarity economics, and work to strengthen and find new local markets and to cut out the middleman so that the producers can sell their goods themselves. They are also trying to influence governments when they create new laws,” she explains.

It is not always completely clear exactly what is meant by ‘solidarity economics’. One of the big meetings she took part in as part of the platform was devoted to discussing precisely that. But essentially, it is based on five principles:


Klara Friman in GranadaKlara Friman is sitting in bright sunshine and 30-degree warmth in Managua when we connect on Skype for the interview. Outside my window temperatures are freezing and it is snowing heavily. Of course she misses home a bit at times, even if Managua feels like home after three months.

“At times it can be quite tough to be a girl alone in a city like Managua; the biggest difference is probably safety. After six in the evening it gets dark and it is not safe to go out on the streets – they are not lit like in Sweden. It also feels unusual to be objectified as a woman; a lot of men catcall her on the streets, which gets very frustrating in the long run.

But the advantages outweigh all this and she does not regret taking this opportunity for a second.
“I often hang out with the people I live with: a girl from Holland, a girl from Germany and a Nicaraguan guy. I also have a cool supervisor, Denis.”

A few dozen kilometres from Managua, in the town of Matagalpa, there is also a Swedish girl, Elin, who travelled here under the same trainee programme and who works on a coffee cooperative.


“We work 40 hours a week but the rest of the time Elin and I try to travel round and see things. It’s cheap to travel on the small, cramped buses, and there are vendors who come with water, soft drinks and sweets. It’s an incredibly beautiful country,” she explains.

Wants to work with sustainability

Her graduation project was in circular economy and in the future she wants to work in sustainability. She was also an exchange student in Spain for a year, so an aid project in a Spanish-speaking country was tempting:
“I wanted a job that meant something and began looking on the web.”

SIDA (the Swedish International Development Cooperation Agency) offered a number of opportunities and she opted for the programme with We Effect, formerly Cooperation Without Borders, which also took her to Nicaragua. The trainees have their journey paid for and then live on their per diem.

“Living here is cheap,” she confirms.

For the remaining two months she will continue to plug away on the graphic profile and make sure she leaves a communications plan behind her.
“They need to be able to communicate and I hope and believe that they will benefit from what I do.”

And she is going to learn salsa.
“It is a fantastic opportunity to come here and work; I have already learnt a huge amount about Nicaragua, about foreign aid and – not least – about myself. The job here is not so technical but it is good if more masters’ graduates take the opportunity to travel, because taking in many different perspectives in development work is important.”

In the middle of March she will head home, and part of her task will then be to report back on her experiences; this will include travelling round to schools to talk about Nicaragua.
“I really recommend applying for this type of traineeship to everyone.”