One of the most exotic Swedish traditions is Lucia, celebrated on 13 December. Lucia arrives in the morning, with her handmaidens and star boys; in white robes, carry candles and sing Lucia songs. The tradition has its roots far back in history. 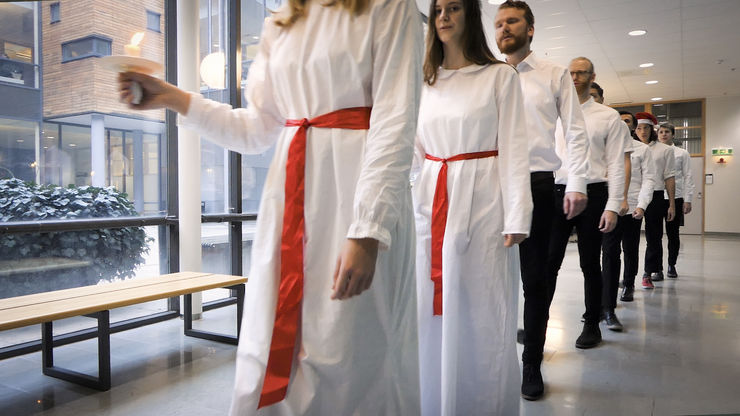 Most people in Sweden have probably experienced a Lucia procession, which is always held on 13 December. Lucia arrives with a crown of candles, accompanied by handmaidens carrying candles and “star boys” with cone-shaped hats, all dressed in long white robes. A Lucia procession sometimes includes children dressed as gingerbread biscuits and elves. Everyone sings traditional Lucia songs that most Swedes know (more or less) by heart.
Burning candles are nowadays sometimes replaced by battery-powered ones. Even so, a special atmosphere is created when the well-known songs are heard in the distance and the Lucia procession enters a room in darkness.
Coffee and saffron buns (“lussekatter”) are often served after the procession. The buns are baked from wheat and the saffron in them gives a special yellow colour. The most common shape for a bun is “S”, with the ends rolled into a spiral and decorated with raisins. Lucia is celebrated at Linköping University in several ways. It differs from year to year, and it’s not unknown for departments and divisions to arrange their own, smaller Lucia processions, or invite schoolchildren in to hold a procession for them. The many choirs at the university hold concerts, performing the traditional Lucia songs. In recent years, modern variants have been seen, with robots holding their own Lucia procession.

So how old is this tradition, and where does it come from?

Lucia has its roots both in Swedish prehistorical and medieval history and in what is now Italy during the Roman empire.
In prehistoric Sweden, the cycle through the year was marked. At the darkest time of the year, before the winter solstice, folk believed that evil powers such as demons and trolls were rife, causing trouble. On this night, a being known as “Lussi” or “Lussegubben” was around. He was also known as “Lusse-Per” or “Lucifer”, and was identified as the Devil himself. To prevent bad things happening to the farm or its animals, people held watch through the night.

Each day in the calendar was given a saint

When Christianity took over Sweden and introduced the Julian calendar, the longest night of the year was the one between 12 and 13 December. This was the case until 1753, when the Gregorian calendar that we use today was introduced. On this calendar, the winter solstice occurs on 22 December.

When Christianity took over Sweden, each day in the calendar was given a saint. The one for 13 December was Saint Lucia. She gets her name from the Latin “lux”, which means “light”.
Saint Lucia was born around 280 AD in Syracuse on Sicily and was chosen as a Christian martyr and saint after her death. In Christian art, she is depicted with a sword or dagger and a wounded neck. Sometimes, she carries two eyes on a plate, and this refers to the legend that before her death she gouged out her eyes and sent them to her true love. However, God gave her new and even more beautiful eyes.

The celebration of Lucia continued in Sweden as it had been for centuries, right up until the 18th century, and food and alcohol were often involved. Young people travelled from farm to farm, hammered on the door, sang a brief ditty, and were given liquor and food as thanks.
However, this old heathen tradition with its drinking was not popular among the priests. Rather than forbidding the custom, they gave Saint Lucia a more important role in the celebrations. This technique, of absorbing heathen local traditions into religion, became a compromise, and was used for other things than just the Lucia celebrations.

The foundation of modern Lucia celebrations was set in western Sweden among the higher layers of society. Towards the end of the 19th century, the Skansen open-air museum in Stockholm established Lucia celebrations, but it wasn’t until 1927 that the tradition became popular among the broader public. This was when the Lucia competition was held, with several candidates competing to be crowned Lucia. Most Swedish towns were quick to copy the idea. Schools and workplaces also took up the custom, and Lucia, who initially had been rather lonely, acquired a following of handmaidens, star boys, the three wise men, gingerbread biscuits and elves.
Lucia today is an important tradition for many people. For those with small children, celebrations start early at home, continue at preschools and schools, and may also be held at the workplace.

Lucia has become something of a symbol for Sweden. Only the Nordic countries have a tradition of Lucia celebrations centred around light, two weeks before Christmas. Lucia is an important tie to their home country for Swedish people throughout the world, who have taken the concept with them as an export product.

A Lucia procession with the SKÖN choir at Campus Norrköping

Get into the Christmas spirit together with a Linköping University choir. Here are the details of Christmas concerts and Lucia celebrations for 2021. See you in 2022!