One of the world's leading Parkinson disease-researchers awarded by LiU

Professor Andrew Lees is awarded "Linköping Neuroscience Award". Lees is referred to as one of the world's leading researchers in Parkinson's disease.

This was the second time the "Linköping Neuroscience Award" was handed out. Neuro research has been a strategic area for Linköping University and Region Östergötland for a couple of years. 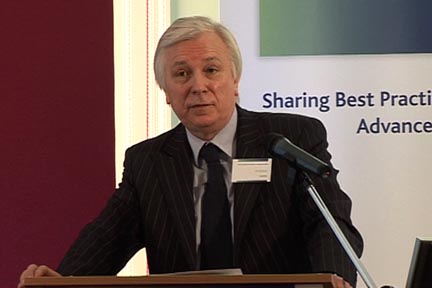 He has received numerous prestigious awards including the American Academy of Neurology Movement Disorders Research Award, the German Society of Neurology Dingebauer Prize, the Jay Van Andel Award for Outstanding Research in Parkinson’s Disease, and the Association of British Neurologists Medal.

The Reta Lila Weston Institute of Neurological Studies, where Professor Lees served as director from 1998-2012 and currently acts as emeritus director, is focused on neurodegenerative disease research with special emphasis on parkinsonian disorders, hereditary spastic paraplegia, and stroke.  It is a research institute within the UCL Institute of Neurology and carries out collaborative, interdisciplinary research combining clinical, genetic, and cell biology approaches.

– We are very pleased that Andrew Lees wanted to come here. He is one of the most renowned Parkinson researchers in the world. It's a great opportunity to take part of his knowledge, says Anders Blomqvist, director of the Center for systems neurobiology at Linköping University.

In his memoir Mentored by a Madman:  The William Burroughs Experiment (2016), which will be the focus of the Linköping Neuroscience Award Lecture, Professor Lees described how the experiences of author and drug addict William S. Burroughs and the methodology of Arthur Conan Doyle’s fictional detective Sherlock Holmes informed his research and influenced his career.