Researchers investigate the link between austere policies in migration, economy and welfare, and, marginalization of minorities´ experience. 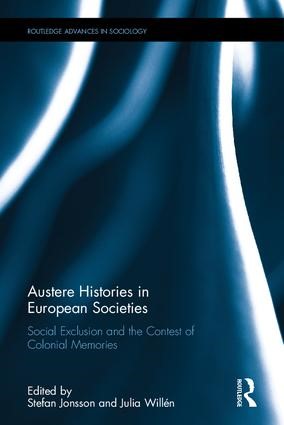 Austere Histories in European Societies: Social Exclusion and the Contest of Colonial Memories, edited by Stefan Jonsson and Julia Willén, is based on a symposium and gathers researchers to consider the present, where European states have turned toward more austere political regimes, entailing budget cuts, deregulation of labour markets, restrictions of welfare systems, securitization of borders and new regimes of migration and citizenship. In the wake of such changes, new forms of social inclusion and exclusion appear that are justified through a reactivation of differences of race, class and gender.

Against this backdrop, this collection investigates contemporary understandings of history and cultural memory. In doing so, the reader joins leading European scholars who examine how crisis and decline in contemporary Europe trigger a selective forgetting and remodelling of the past. Austere Histories in European Societies breaks new paths in scholarship by synthesising and connecting current European debates on migration, racism and multiculturalism. In addition to this, the authors present debates on cultural memory and the place of the colonial legacy within an extensive comparative framework and across the boundaries of the humanities and social sciences. The editors, Stefan Jonsson and Julia Willén, are professor and PhD candidate at REMESO.