In 20 years, one-quarter of all Swedes will be over 65 and when we need care we will receive it in our homes. The Digital Health Lab, which will help us detect diseases in time, dose medicines properly and be healthier, has now been inaugurated.
In Sweden there are currently 500,000 people above the age of 80. After 2030, 800,000 Swedes will be over 80. This is the result of the large number of children born in the 1940s. Many of them will be fit and healthy. Even more will need healthcare.

“In 20 years I will be standing here as an aged town councillor, saying that thanks to your research and creativity growing old with continued quality of life is seen as something positive, not as a financial burden for the local community.

These were the words of Lars Stjernkvist, town councillor in Norrköping municipality, as he inaugurated the Digital Health Lab in Kåkenhus.

New Tools for Health (Hälsans nya verktyg), which began as a Vinnväxt project financed by Vinnova, is now moving into Kåkenhus Building together with SICS Swedish ICT to be part of a new phenomenon in Norrköping – Digital Health Lab.

New Tools for Health has been in existence for ten years, started 29 new companies and put 70 products onto the market, all of which contribute to making life better for us humans.

“I am deeply impressed by the regional commitment from the regional authorities, the municipalities and the university on these issues. This is unique to Sweden and a showcase we can continue to develop together,” added Per-Olof Sjöberg, Head of Digital Health within SICS. 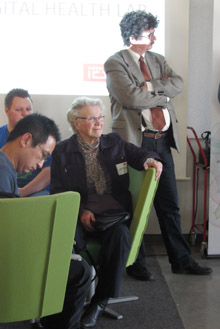 The proximity to sister institute Acreo Swedish ICT, Professor Berggren’s Organic Electronics research team, and their joint Biocom Lab is yet another plus in the context. A goal for them is the online body, where we humans – just like cars – can rapidly have a wrong diagnosis corrected, by means of sensors, computers and wireless networks.

“In collaboration with Karolinska Institutet we have shown that we can supply neurotransmitters capable of reducing pain, adjusting hearing and stopping epilepsy,” says Göran Gustafsson of Acreo Swedish ICT.

Also present at the inauguration of Digital Health Lab was Norrköping resident Ingrid Bergman and a number of ladies over the age of 80, who are part of the New Tools for Health test environment in Norrköping. 70 pensioners over 80 have been learning to use computer tablets.

“Ms Bergman has apparently said that when you get older you get a bit shorter of breath, but you see the world much better,” explained Anders Carlsson from New Tools for Health.

“The tablet has opened up a completely new world to me and I like what I see,” Ms Bergman replied.