A young girl’s cautious smile, and parents who can’t take their
eyes off her recently operated-on face. A 45-minute procedure is life-changing
for a child with a cleft lip and palate, as LiU’s Emilie Engblom has seen while
volunteering for Operation Smile in Nicaragua. 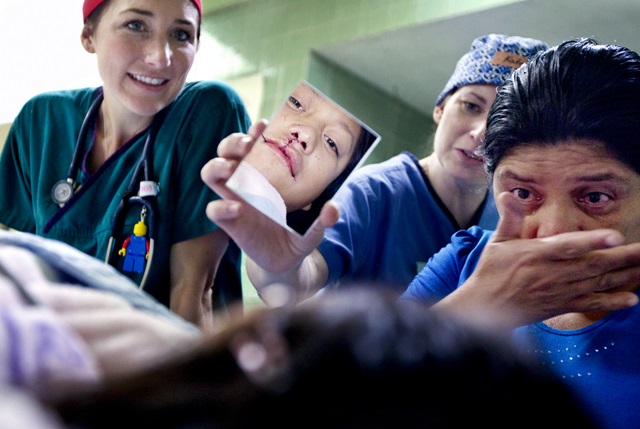 It started with a presentation of the international charity ‘Operation Smile’. Speech-language pathology student Emilie Engblom knew immediately that she had to get involved in this. The speaker was a speech-language pathologist who shared her experiences of volunteering. Operation Smile accepts commissions to travel to developing countries, to operate on children with cleft lip, jaw and palate.

“I raised my hand and heard myself ask, How can I get involved in this?”

This led to Emilie starting what is now ‘Operation Smile Young Volunteers LiU’, an association of eight students. Their main focus is increasing awareness of what Operation Smile does, for instance at student fairs and events. This spring it’s ‘Operation Smile Month’, when they work extra hard to make the organisation more visible.

An Operation Smile commission normally lasts about ten days. All the equipment and staff required to complete about 100 procedures are flown in. Participating staff include plastic surgeons, anaesthetic nurses, paediatricians, speech-language pathologists, psychologists and administrators. Everybody works on a voluntary basis.

Last November Emilie Engblom travelled to the Nicaraguan capital of Managua together with four medical volunteers from Sweden. Young Volunteers can travel as journalists, with the task of reporting on the mission. Emilie also visited a number of rural villages together with two Italian students, to speak about the importance of good hand hygiene, brushing one’s teeth and healthy food.

“It seemed like we worked round the clock, but it was fantastic!” 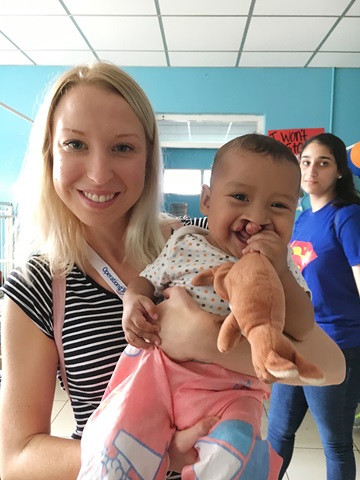 During Emilie’s assignment in Managua, 135 children had surgery – that’s 135 lives changed, in about one week. Children with a particular appearance due to cleft lip or palate are often bullied, and many cannot or do not want to attend school. As they don’t learn to read or write, they often start working in the home at an early age. And they end up being hidden away.

“In some countries, and especially in rural areas, it’s difficult for children born with facial deformations. People there see medical treatment differently, and the appearance that goes with cleft lip or palate can be considered punishment for something. The child and his or her family, and sometimes the entire village, can be harassed and isolated,” says Emilie.

Cleft lip, jaw and palate don’t only lead to cosmetic problems and the consequences of these. Children who don’t have surgery at an early age have difficulty creating pressure in the oral cavity. And as a result, they have trouble breastfeeding and drinking from a bottle; these actions require suction. The children are often undernourished when they arrive at Operation Smile’s gathering points. Speech is also affected by cleft lip and palate. Sufferers have difficulty pronouncing letters that require a closed mouth such as p and b, which means they speak differently.

“When you take part as a speech-language pathologist in an Operation Smile assignment, you work with problems relating to speech and eating, often aided by an interpreter. For instance the children get to practice making various sounds.”

A simple surgical procedure can open completely new possibilities for a child. Emilie will never forget some of the emotional moments she witnessed: the parents’ joy when the child is approved for surgery, their concern as the child is taken to the operating room, and their gratitude when the procedure is finished.

“I brought parents into the operating theatre, where they got to see their girl or boy for the first time after the procedure. They couldn’t stop looking at them!”

Operation Smile’s ambition is to return regularly to the same place, to reach everyone who requires surgery. However accessing remote villages can be tricky, and conveying a message using advertising can be ineffective, as literacy is often poor in the regions where Operation Smile is active. Coordinators from the organisation travel to villages and towns with pictures showing what cleft lip and palate can look like. They speak to the locals, to find out if they know of anyone with this problem. Operation Smile has also just opened an operations centre in Managua, and during Emilie’s volunteer period training was given to local doctors and students, who will later be able to take over the operations.

“The aim of Operation Smile is that all children with cleft lip or cleft palate can have surgery. Parallel with this, Operation Smile trains medical staff on site, so they can eventually take care of their patients themselves.”

“In Sweden we tend to take healthcare for granted. Being part of bringing such a huge improvement to someone’s life, as I experienced during the assignment, has given me a new perspective on that,” says Emilie.

Emilie won’t stop working with ‘Operation Smile Young Volunteers LiU’ just because she finishes her degree. Later this year she will give a presentation and share her experiences with speech-language pathology students. Considering Emilie’s enthusiasm, it’s very likely that she will spark an interest in volunteering amongst a few audience members, just as happened with her.