A research team at Linköping University, together with colleagues
in Europe and the United States, has shown that at extremely high pressure even the innermost electrons in the atomic nuclei of the metal osmium begin to interact with each other, a phenomenon never witnessed before. The findings have been published in Nature

“If we know more about how a matter works, we will be in a better position to develop materials that withstand extreme conditions. In research we're constantly making advances, but in this case we’ve taken a giant leap”, says Igor Abrikosov, professor of theoretical physics at Linköping University, who also leads the theoretical team within the project. 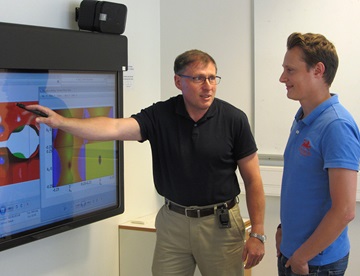 We already know that material properties change at high pressure. As pressure increases, the distance between the atoms decreases, and the outer electrons, the highly mobile valence electrons, interact with each other. It is also the valence electrons that determine the material’s properties. For example under high pressure a shiny electrically conductive metal such as sodium becomes a transparent insulator, and a gas such as oxygen solidifies and conducts electricity. The oxygen can even become superconductive.

But while the valence electrons are highly mobile, the inner electrons continue to move steadily around their atomic nuclei.

The highest pressure achieved thus far is 4 million atmospheres or 400 GPa, which is roughly the pressure at the earth's centre. But thanks to a newly developed method, the researchers have been able to achieve a pressure that is twice as high as at the earth's centre and 7.7 million times higher than at the earth's surface. With great precision they have then been able to measure both temperature and relative positions of atoms in a small crystalline piece of osmium. Osmium is the metal with the highest density and is almost as incompressible as diamond.

Compressing osmium to this high pressure, the researchers found an unexpected anomaly in the relationship between the interatomic distances.

“The high pressure didn’t result in any significant change to the valence electrons, which surprised us. It made us rethink things, and go back to the theories”, explains Prof. Abrikosov.

Advanced supercomputer calculations at the National Supercomputer Centre, NSC, in Linköping later revealed how the innermost electrons start to interact with each other as a result of the extreme pressure.

“This is a perfect example of collaboration between experimental and theoretical materials research”, says LiU researcher Dr Marcus Ekholm, co-author of the article. 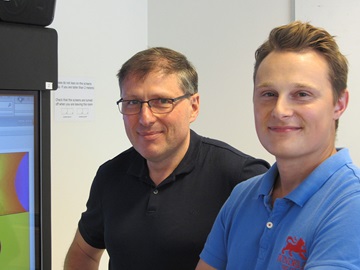 Foto: Monica WestmanThis breakthrough is the result of a long-standing collaboration between the research team at LiU and researchers in Germany, the United States, the Netherlands, France and Russia. The researchers at Bayreuth University in Germany developed the method that makes it possible to apply twice the pressure that was previously possible, while still being able to measure and maintain control. This high pressure could exist at the centre of larger planets than ours.

“Interaction between inner electrons has not previously been observed, and the phenomenon means that we can start searching for brand new states of matter”, says Prof Abrikosov.

The results have been published in the highly ranked journal Nature.

“We’re really delighted, and it’s exciting as it opens up a whole box of new questions for future research”, says Prof Abrikosov.


This method has been in use since the late 1950s. The researchers in Bayreuth, with the help of nanotechnology, have developed a small synthetic diamond that is positioned halfway between two ordinary diamonds, on each side of the Osmium crystal. The small diamonds are just a few thousandths of a centimetre in diameter. Because the area is significantly decreased, the pressure is significantly higher. 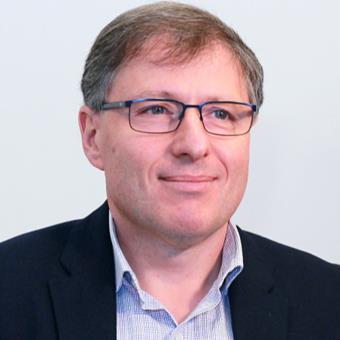