Robot developer wants to reach out

One of the two recipients of this year's Anders Wall scholarships for research in the natural sciences is Fredrik Löfgren, robot developer and student of applied physics at LiU. 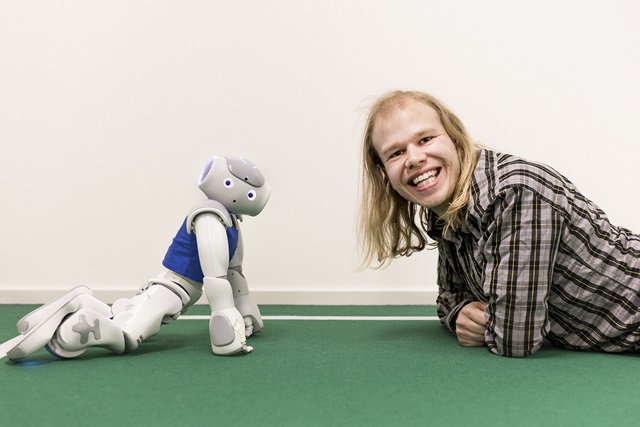 Fredrik Löfgren, masterstudent Foto: Charlotte Perhammar 2017Your reactions on getting the scholarship?
“It’s brilliant. SEK 150,000 is a huge amount, but I don’t actually care about the money. It’s nice to be selected for a scholarship in the natural sciences, for me that’s more important and a greater honour than the money. And it’s good that they promote the sciences and engineering.”

In addition to developing robots and studying, Fredrik captains the Swedish national robot football team, teaches maths, runs his own company, and in his spare time is building a humanoid robot. He thinks the money will be useful for many aspects of his work.

“It can be used to buy robot parts for our research at LiU. Also, I organise robot workshops for children, which I can now do for free. The money will benefit our outreach activities, where I head out to meet children and businesses, and I can use it in my robot development work.”

What is the next big thing in robot research?
“Right now it’s a lot about artificial intelligence. In transport there’ll be a big focus on driverless cars, which can replace quite a few transports within businesses, for instance with forklifts, as well as transports between cities and towns. In the United States there are three million truck drivers – three million people who could lose their jobs within five or ten years.”

What is LiU’s role in robot research?
“We have Sweden’s oldest computing programme, and the Department of Computer and Information Science does excellent research in AI. We’re much better than many universities. KTH Royal Institute of Technology is also good, and we collaborate closely with them. When I started working at LiU in 2012 there was no lab for humanoid robots, but I got to develop one. Today I’m director of the lab, and in charge of our robots. It’s fun to have been involved right from the start.”

When you finish your studies, what do you foresee for your future?
“I’m an entrepreneur, I enjoy the business world. Lots of researchers like to advance the boundaries of what we know, and write articles, which later end up on a shelf. Their research doesn’t reach the general public. But I’m driven by a desire to engage with society, and make sure that our knowledge gets out into the real world, and is made use of. I can take ideas and theories from the university and commercialise them, make products out of them. I want to continue with this combination, so in ten years I think I’ll have one foot in academia and one in business.”