The United Nations’ climate change negotiations are sometimes
criticised for inefficiency and meagre results. But there are no obvious alternatives, according to two researchers from Linköping University in a study published in Nature Climate Change. 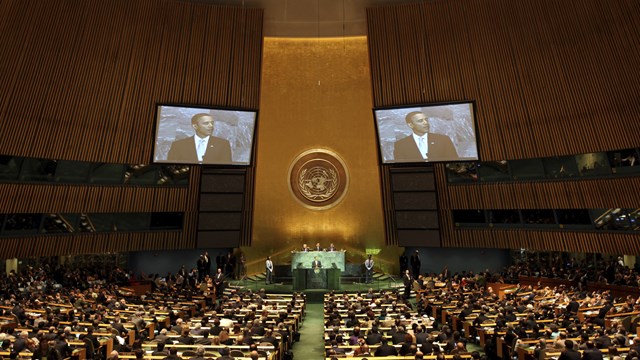 Foto: Rick GershonOver the past two decades the international community has tried to mitigate climate change through multilateral negotiations under the United Nations Framework Convention on Climate Change (UNFCCC). But these negotiations have been criticised for often not making any headway. As a result of the slow progress, there have been proposals to move parts of the negotiations to other smaller and more flexible forums, also called clubs, consisting of a selection of states. The aim is increased effectiveness.

In the journal Nature Climate Change, Matthias Hjerpe, senior lecturer, and Naghmeh Nasiritousi, doctoral student, present questionnaire data showing that there are no obvious alternatives to negotiations under the UNFCCC. With close to a thousand responses from governmental and non-governmental respondents, the researchers could gain insights into how the conference participants viewed the idea of alternative forums.

It became apparent that they preferred state-led multi-lateral forums, similar to the UN Convention. Over time the researchers see a trend where more participants mention forums focussed on the role of the cities, and forums led by non-governmental actors. Thus the support for clubs is weak in all parts of the world, apart from Europe and North America.

”Europeans prefer economic clubs like the OECD, while North Americans prefer climate clubs such as the Major Economies Forum on Energy and Climate,” says Mattias Hjerpe.

His research group is currently managing several studies on the new climate-political landscape, for instance on the legitimacy of the negotiators and the steering functions of the meetings.

Hjerpe adds that the variety of the delegates’ responses and the differences in views between delegates from different parts of the world demonstrate the importance of UN’s climate change negotiations being coordinated with other environmental initiatives.

”We see indications that the Convention increasingly takes the role of umbrella organisation. For instance it has opened a portal, NAZCA, where non-governmental actors can register their climate-change initiatives. It’s a step forward for collaboration in the environmental field,” he says.