This week a Swedish research delegation is visiting Brazil. It is the largest ever, with close to a hundred Swedish researchers, various vice-chancellors and research funding bodies meeting their Brazilian counterparts within the framework of the Brazilian-Sweden Excellence Seminar. The delegation is headed by LiU vice-chancellor Helen Dannetun, and includes some 20 LiU researchers. 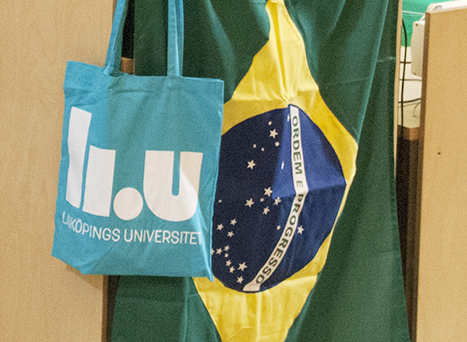 Photo credit: Oskar LindqvistThe seminar is the fifth that has been held within the framework of the Sweden Academic Collaboration Forum (SACF), a collaborative project between Lund University, Uppsala University, Stockholm University, KTH, Chalmers and Linköping University. Linköping and Uppsala are responsible for the events.

“Sweden and Brazil have strong ties going back many years. Swedish industry has been established here for more than a hundred years. But the Gripen project is a ‘game changer’, it involves 30 to 40 years of joint development work, where research and training will play key roles. And it stretches far outside the field of aeronautics,” said Sweden’s ambassador in Brazil, Per-Arne Hjelmborn, as he opened the seminar.

The purpose of the SACF seminars is to create an arena for establishing new contacts, while strengthening and extending existing contact networks. Sustainable development, autonomous systems, new materials, education and visualisation are the themes that the researchers have gathered to discuss.

”I’m delighted to see such great interest from the Swedish researchers, as well as from the Brazilian side. Researchers from more than 40 universities are in attendance. And it’s a very strong starting group, if you consider which researchers are here,” says Vice-Chancellor Helen Dannetun.

The seminar takes place in Brasilia, the nation’s capital, on Tuesday and Wednesday. During the rest of the week there will be a number of follow-up seminars at various locations around the country. 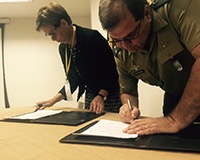 While in Brazil, Linköping University will also sign a couple of new agreements with universities there. On Monday a partnership agreement was signed with IME, a Brazilian technical university with links to the Brazilian defence, but where most students end up in civilian careers. LiU and IME already have a well-established collaboration: for instance IME has expressed great interest in the CDIO Initiative – a new method for engineer training that the Faculty of Science and Engineering has used for several years, and doctoral students from IME are currently in Linköping, studying Innovation Management.

On Thursday LiU will sign a student exchange agreement with the Federal University of Minas Gerais – UFMG – which is considered one of the country’s best.