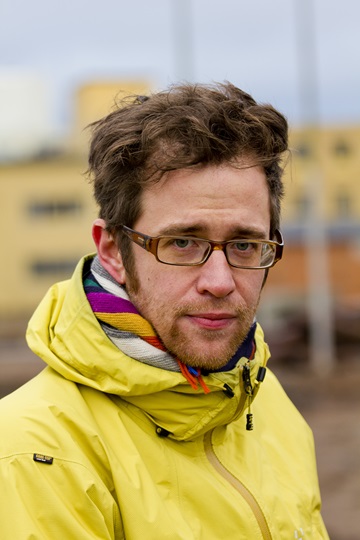 Foto: Peter Modin
“Underneath Norrköping alone there are over 5,000 tons of iron, copper and aluminium that is not being used,” Wallsten says.

In the presentation of his licentiate, he gets emotional about the fact that we continue to extract metals from the earth at high risk to people and the environment, despite the fact that only half of all the metal we have already taken out of the Earth’s crust is being used. This was something his research colleague Nils Johansson worked out as part of his licentiate thesis.

“In Sweden, we probably have the most liberal mining regulations in the world,” Wallsten states.

For certain metals – copper, for example – we have already mined more from the Earth's crust than is estimated to remain. Copper is also a valuable metal which it should be profitable to recirculate.

“The 560 tons of copper – at least – that remain in municipal land under Norrköping is worth about SEK 28 million,” he states.

He has prospected the urban mine with the help of a number of different sources. Some were in Norrköping City Archive, some in the municipality, and some with private companies who build and manage the city’s infrastructure. All the data sources were then digitalised and stored as GIS data. The quantities of metal he found are an underestimate, since neither the cables on private land nor those inside the building perimeters are included in the study. Nor are the twenty-plus infrastructure systems in Norrköping included in the study.

There are still problems

Of course this kind of mining does bring some problems: excavating and recycling metals is currently too costly compared with mining for new metal, but innovative methods are being designed. Among these is a technology that Björn Wallsten will be studying more closely: Kabel-X. This is an Austrian technology, whereby an oil – a lubricant – is injected into the cable jacket and then the copper cable itself is winched out. When the copper has been pulled out from one end it is easy to pull fibres in from the other side. Thus it is possible to recycle and upgrade at the same time.

In a recent pilot project in Malmö, 90 metres of copper cable with a value of approximately SEK 15,000 (ca EURO 1,700) were successfully extracted in two days without any significant effect on the environment or the surrounding area.

This is a technology that he intends to study more closely during the rest of his time as a PhD student. Another project is to hold workshops to gather knowledge from many different areas in order to solve the problems associated with urban mining.

“There is some hope that this research could lead to change,” he says, concluding his presentation.

Some points from the opponent

Is Norrköping unique, or what is the situation in the rest of the world? wondered Dr Vanesa Castán Broto from University College London.

Wallsten could not really answer this, since more comparative studies with other cities both in Sweden and abroad, which have different types of infrastructure, need to be carried out.

Socio-economically then? Is there any difference between rich areas and areas where a lot of poor people live? she continued.

Björn Wallsten has not looked at this aspect yet, but he still has an answer:

“It would be good to find out about this, especially since this would reveal whether the infrastructure for certain people is updated or repaired more often than for others. But naturally, the more metal there is in a place, the easier it is to make money by extracting it, particularly where a street is going to be dug up for another reason.”

For example, in the old industrial area of Butängen in Norrköping, where the municipality is planning new building projects – now a very topical issue with the construction of the Eastern Link (Ostlänken).

Licentiate thesis Underneath Norrköping, an urban mine of hibernating infrastructure, Björn Wallsten, Division for Environmental Technology and Management, Department of Management and Engineering, Linköping University, 2013.

There are many good reasons for excavating Sweden’s landfills in search of valuable metals. But it is not happening. In his licentiate degree thesis, Nils Johansson sought an explanation as to why we prefer searching in space to mining our own rubbish tips.