For the first time in the world’s history, people with alcohol addiction will be treated with magnetic stimulation of structures deep within the brain. The study is led by Professor Markus Heilig, who has recently been recruited to LiU from a top post in the United States. 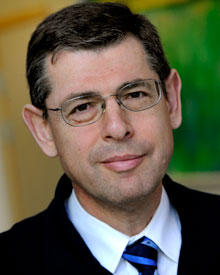 “We know that the ‘usual’ treatment in alcohol addiction – a combination of detoxification and conversational therapy – has at best a fairly limited effect. But it’s still used quite a lot,” says Professor Heilig, who has served as clinical director of the National Institute on Alcohol Abuse and Alcoholism in Washington DC.

Now, when he’s setting up a study with a heretofore untested method, he’s aiming for the insula, a lobe of the brain five centimeters inside the skull. From here, things like empathy and regulating emotions are governed. The insula receives signals from the inner organs of the body (the ‘gut feeling’) and is active in people who have a craving for drugs.

“People who have had a stroke in the insula can lose their craving from one day to the next, Professor Heilig says.

In a similar – but significantly milder – way, his research group is now going to research whether a weak electric current through the nerve cells can influence the desire for alcohol in patients. The method is called TMS (trans-cranial magnetic stimulation) and has recently been upgraded in order to be able to reach this deep into the brain.

The study covers 80 people who, for three weeks, are given either the active TMS treatment or a placebo. After that, they are monitored for three months with interviews and specimen collection for biomarkers in hair and urine. The participants can also take a couple of turns in the MRI scanner so that the researchers can study how the insula responds before and after the treatment, for example when the person is allowed to see pictures that usually create a craving for alcohol.

“We’ll be the first in the world to use TMS on alcohol addiction. In the United States, it’s demonstrated a good effect on nicotine addiction and depression. We know that safety is good and that no side effects have been reported,” Professor Heilig says.

The study in Linköping, which is one of 19 nodes in a large EU project, is planned for start in the autumn of 2015 with patients from the addiction clinic at the University Hospital.

The battle against drug cravings

Mentalmillness and addiction are growing problems the world over. Is there a way to halt this development? Linköping University is doing its part with a major new initiative.