You probably have already seen “Märkesbacken”. It stretches from the northern end of the Corso to the C Building on Campus Valla, along Bredgatan in Norrköping and around the Örat student union building on Campus US. But what exactly is Märkesbacken? 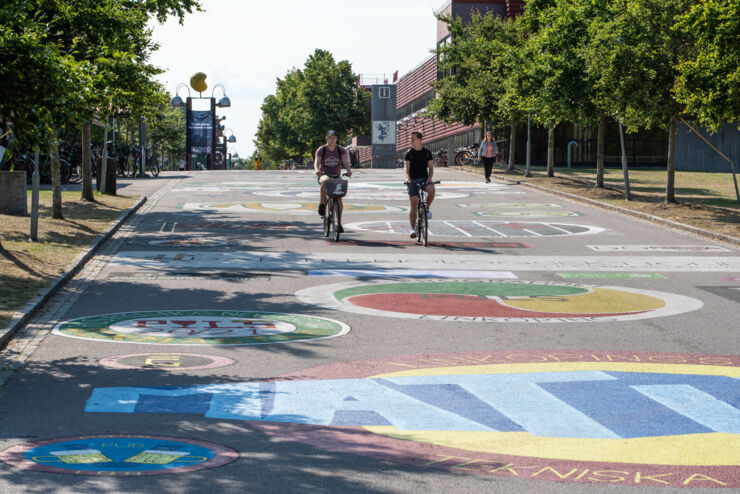 Märkesbacken, Campus Valla. Photo credit Magnus Johansson It has been said that all roads lead to Rome, but at LiU the best way of arriving is along Märkesbacken. On Campus Valla, it stretches along Corson and unites the university campus with the Ryd residential area, passing the lawns at the Colonia residential area to arrive at the lecture theatres in the C Building. On Campus US it winds around the Örat student union building, while on Campus Norrköping it runs from Skvallertorget along Bredgatan to the entrance of Kåkenhus.

Märkesbacken is a real welcoming sight. It's often the first thing you see when arriving at campus, and creates a student-focussed atmosphere from the start. It’s a real splash of colour 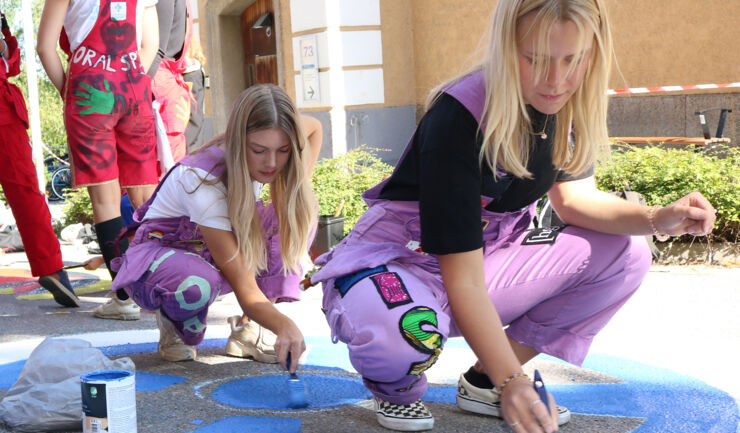 Students painting Märkesbacken on Campus US, Linköping University Photo credit Ulrik Svedin These areas display a cavalcade of symbols, patterns and colours. They have been created by the student unions, by the sections, and by the student clubs and societies active on each campus, having been approved in collaboration between all student unions.

Here, you are quite literally walking over historical ground. Thousands of students have walked along these ways to get to lectures and labs in time, on the way to study in the library, to fika in a student café, or to formal dinners where overalls are the dress code.

At the end of an academic year, the paint has started to peel, and it’s not always possible to identify all of the emblems. It’s time for repainting. The three student unions, in particular the three operational managers for the student union buildings, are responsible for planning the repainting of these areas, in collaboration with the university and Akademiska Hus. They are also responsible for assigning space to new clubs and societies who are painting their emblem for the first time. 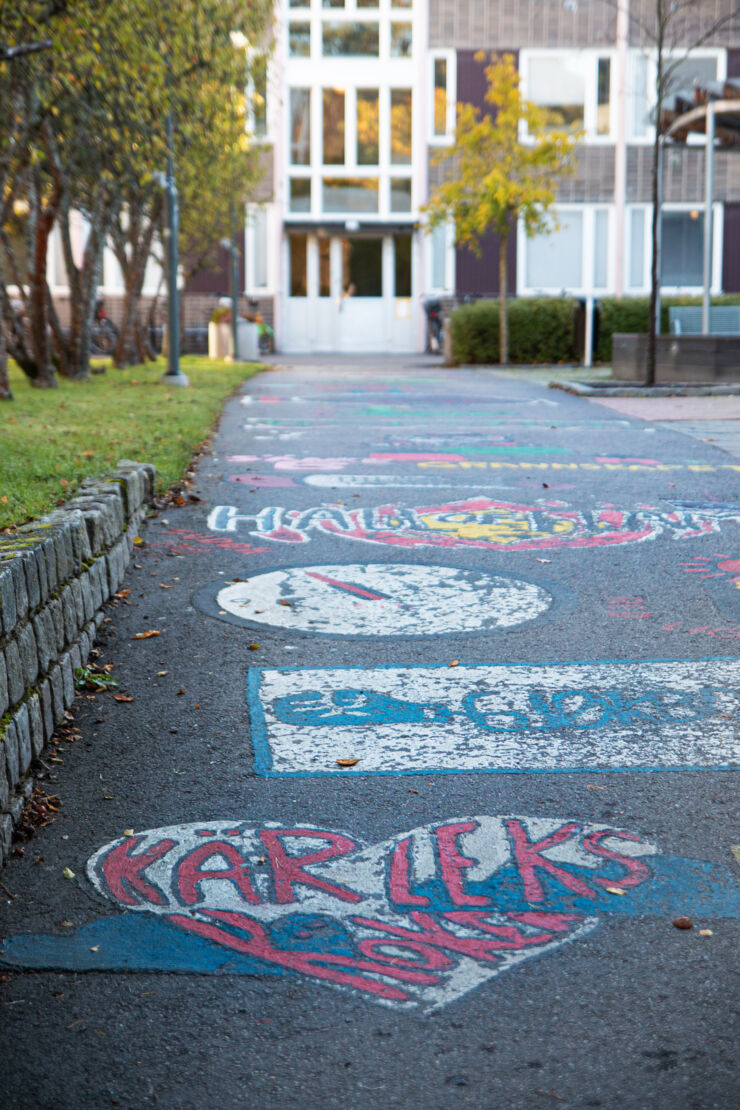 Märkesbacken outside Flamman student accommodation in Linköping. Photo credit Charlotte Perhammar There is also a smaller area of emblems at the Flamman student residences in central Linköping, for those who live there. The area at Flamman is the responsibility of the residence council, together with Studentbostäder. Campus Lidingö does not have a märkesbacke – yet. This may very well be an idea for the future, for students who want to leave their mark there.

Märkesbacken at Flamman is usually repainted in April or May, while the others are repainted in August, just before the beginning of term. The areas are roped off, and students gather to make good the previous paint or repaint the emblems completely. Students who have not seen each other during the summer vacation meet up again, equipped with tins of paint and paintbrushes. The student unions usually lay on refreshments for the painters. It's a fun event, with a party-time atmosphere. The plan is that the paint must have dried properly when the new students arrive and the reception activities are under way.

“Märkesbacken is a real welcoming sight. It's often the first thing you see when arriving at campus, and creates a student-focussed atmosphere from the start. It’s a real splash of colour,” says Elliot Larsson, a student on the bachelor’s programme in communication, society, and media production. 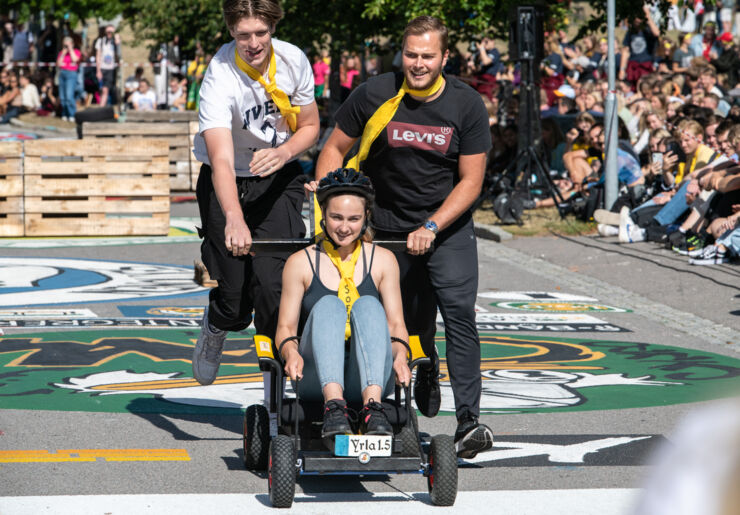 The go-cart race at Märkesbacken, Campus Valla. Photo credit Magnus Johansson A host of activities is arranged throughout the term at Märkesbacken and the surrounding areas. These include a go-cart race, sledging and skiing, and a barbecue. Here, flyers are distributed, and patches for sewing onto overalls are sold, together with tickets to formal dinners and other parties. Märkesbacken is a meeting place for many different groupings.

The biggest recurrent event is “Stilettracet” – a relay race where the competitors negotiate an obstacle course on Märkesbacken at Campus Valla wearing high-heeled shoes. Shoes must have a heel height of at least 5 centimetres, with a contact area on the ground no bigger than a five-kronor coin. Duct tape may be used. The obstacle course is usually based on a topic, such as “jungle life” or “superheroes”. Prizes are awarded for speed, style, and innovative spirit. 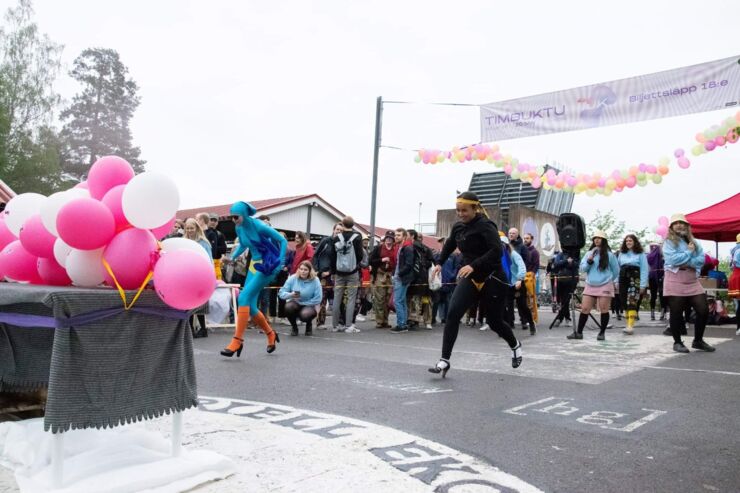 Stilettracet at Märkesbacken, Campus Valla. Photo credit Sabrina Holmegren Stilettracet is part of Utekravallen, one of the largest student-organised events at LiU. It's usually held in May, with the women’s organisations from several sections in the Faculty of Science and Engineering: Tingeling, Systerskapet, Emma, Donna and Yvette.

Sabrina Holmegren has worked on the organising committee of Stilettracet. She worked previously as PR and information manager for Donna, and took the master's programme in computer science.

“The best thing about Stilettracet is watching men, women and non-binary people running in high heels! So many people experience a real feeling of community,” she says.

What’s the best thing about Märkesbacken?

Read more about the student life at LiU There is a lot more to do as a student than attending lectures and studying. Here you can find out about your life as a student including leisure and sports, our campus cities and student associations at LiU.