The Phantom promotes co-operatives in the jungle, and strikes a blow for Pride

Spokesman for Swedish prime minister Olof Palme. Combating colonialism, apartheid and exploitive capitalists. Supporting freedom fighters.
The Phantom in the 1970s reflected Swedish values and Swedish politics. And this year, he struck a blow for Pride. 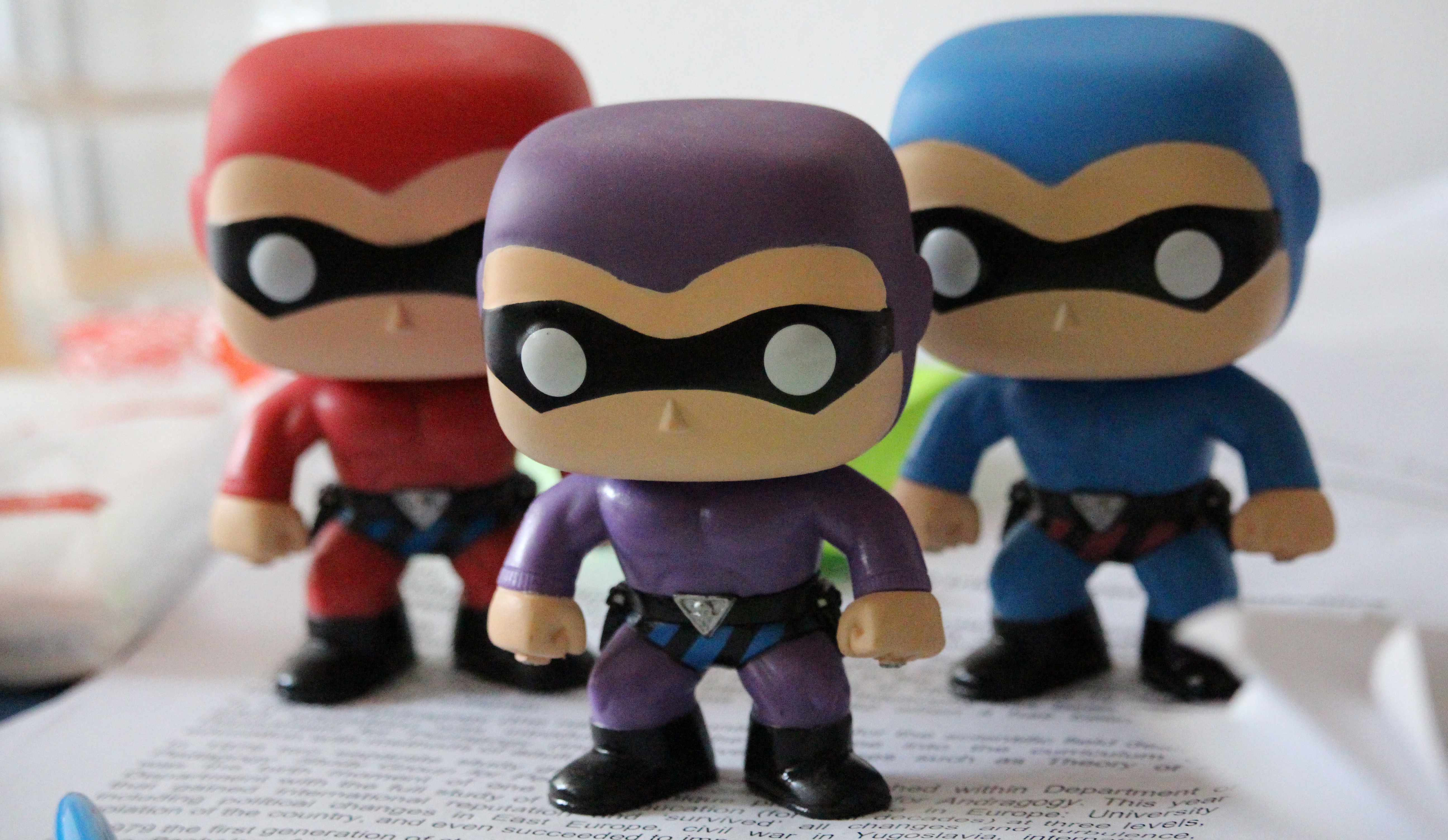 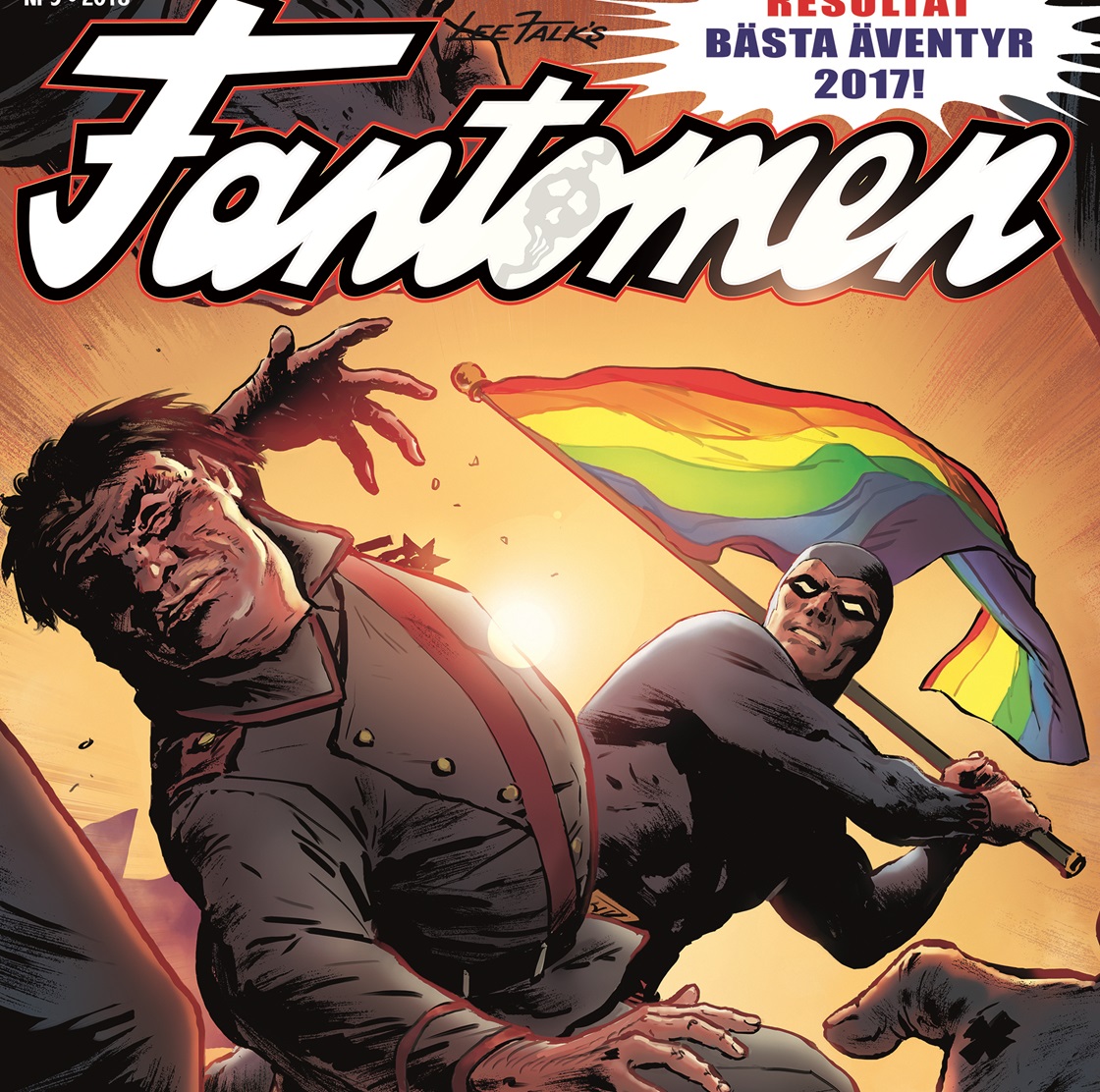 Omslag Fantomen slår motdemonstrant på Pride“Get back! I’m warning you!”
Bash! And the Ghost who Walks swings a punch at a Polish nationalist protesting against the Polish Pride parade in April this year.
“It’s pointless trying to reason with the unreasonable,” he concludes.

“The Phantom has always been political in a way that other heroes aren’t,” says Robert Aman, who carries out research into teaching methods, at the Department of Behavioural Sciences and Learning, Linköping University.
His article “When the Phantom became an anticolonialist: socialist ideology, Swedish exceptionalism, and the embodiment of foreign policy” has been published in the Journal of Graphic Novels and Comics. And another article is in the pipeline, looking at the Phantom’s fight against apartheid.

He is most interested in the series drawn in the 1960s and 1970s, when the circulation reached its peak of 200,000.
“More readers per copy than the popular Swedish tabloid Expressen, which reached an average of three readers per copy, while The Phantom reached twelve,” Robert Aman points out.
How many readers at the time were aware of the way in which the blue-clad hero mirrored Swedish foreign policy? Firmly located at the centre of left-wing ideology of the period.
“Probably no-one. Swedish values were taken for granted. I mean – there was simply no alternative,” says Robert Aman. 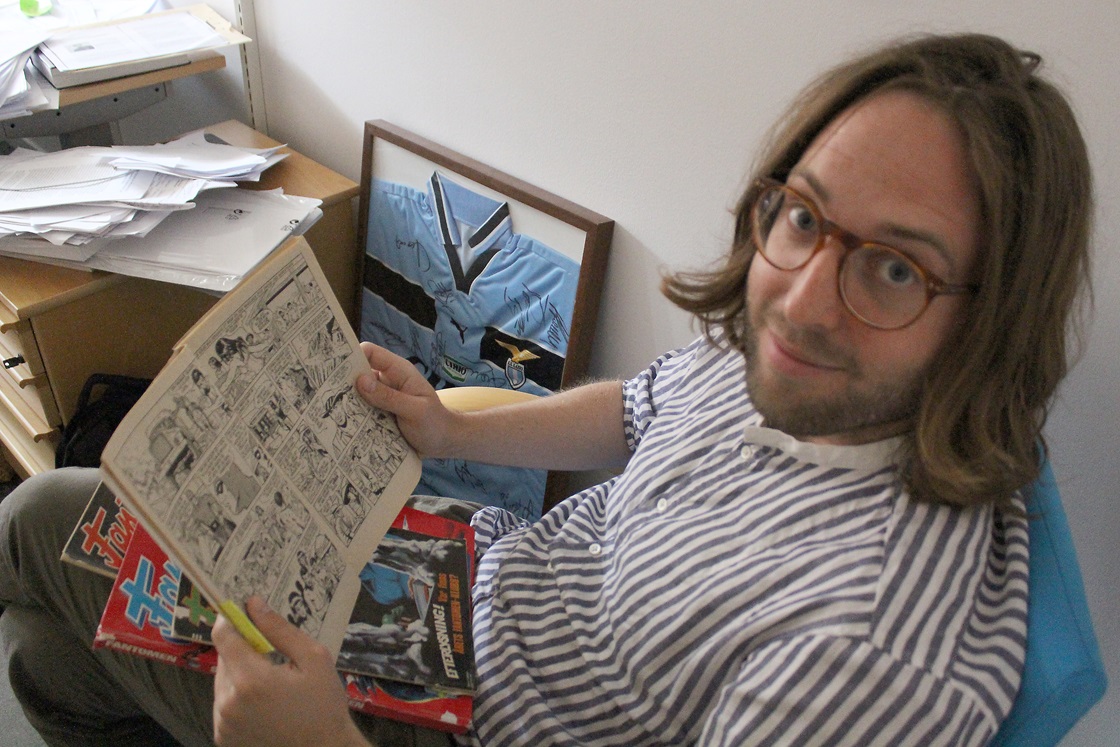 Photo credit: Gunilla PravitzThe Phantom changed his blue for the blue/yellow of Sweden.
But how did it get like this?
“The Phantom had been criticised for racism and sexism, and the publishers thought that the time was ripe to modernise the Phantom’s world and the values the character held. A Swedish editorial office for the Phantom was set up, with a licence to write its own narratives that fit into the ethos of the times,” says Robert Aman.
In particular, it was to reflect Swedish values and the idea that Sweden was an example for the rest of the world to follow.
Sales of the comic increased, and the frequency of publication doubled from once a month to once a fortnight.
But more adventures were needed. ‘Team Fantomen’ was formed in 1973, with Swedish and international writers and artists. The Swedish edition was distributed in Scandinavia, Australia and New Zealand.
Untold numbers of young Phantom fans were to be influenced by his image of the world.

With the hindsight of nearly 70 years, a particularly deep analysis of the battles fought by the Ghost who Walks is not necessary to discover how he embraces the political ambitions of the time to create a socialist society based on equality and solidarity. 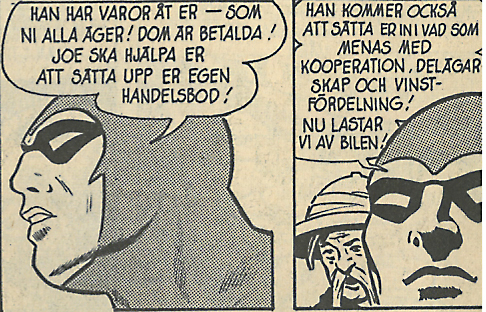 Serierutor Fantomen fixar Konsum Photo credit: Â© KING FEATURES SYNDICATE. INC./DISTR. BULLS/EGMONTThere are many examples, there is a clear teaching strategy, and the adventures are firmly based in the embodiment of the Swedish model.
In one of them – not one of the most exciting, it must be admitted – the Phantom explains in detail how a co-operative can break the power of a white, capitalist merchant.
The Co-op in the jungle.
It works – sort of.
The merchant turns to strategic pricing and entices the customers back.
“Of course, the Phantom fights back – while at the same time rebuking the ignorant natives for their lack of loyalty,” says Robert Aman.

In contrast with Lee Falk, creator of the Phantom, who left the geographical location of Bangalla vague, the Swedish team gave the Swedish hero an identified location: postcolonial (and from a western point of view underdeveloped) Africa.
“The Phantom mobilised to defend Swedish development aid policies, to fight poverty, promote antiracism, and support freedom fighters,” says Robert Aman.
“With a self-assumed role as spokesman for the Swedish prime minister Olof Palme, he intervenes in the armed conflicts that were being discussed in the Swedish parliament. And he helps people in exactly the African countries and regions at which Swedish development aid was targeted.
The Swedish editorial office even created a new country, Rodia,
“Rather a transparent way to denote Rhodesia/South Africa. The Phantom became part of the intense fight against racism and apartheid.”


Che Guevara of the deep forests 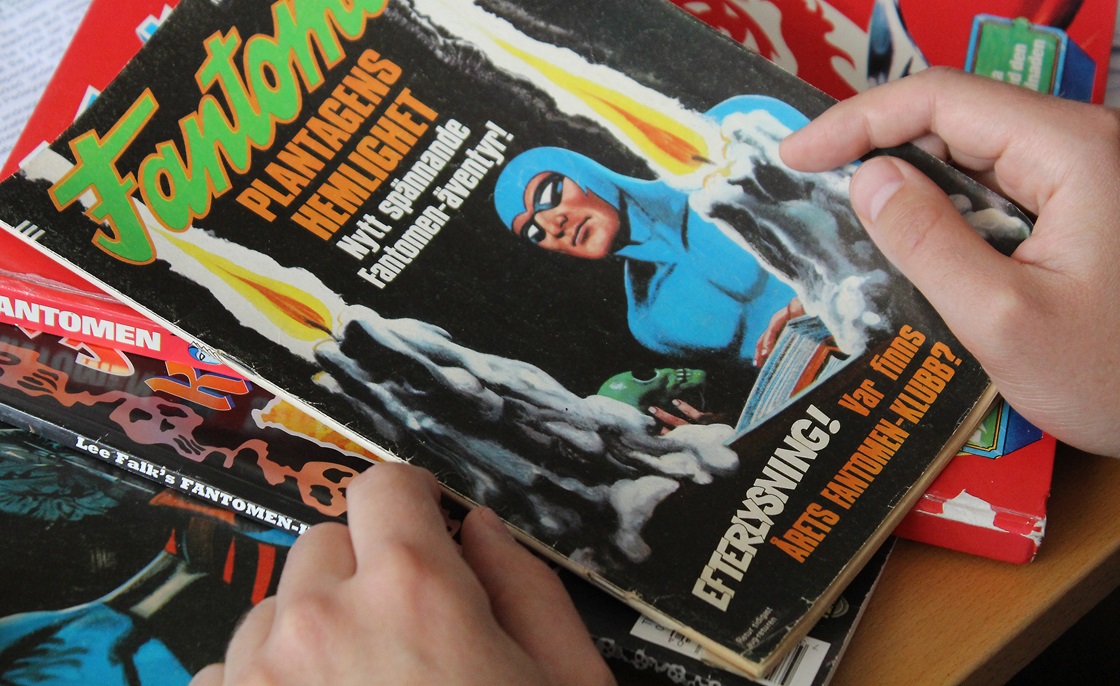 Fantomentidningar Photo credit: Gunilla PravitzThe narratives contain a clear subtext.
Africa’s ignorant tribes and natives in grass skirts who live in general misery in the unexplored jungle can be saved.
It is the white man with his European values and God-given power to create a Garden of Eden who will create the conditions required for postcolonial development in what is known as the “third world”.
And all in Sweden agree: if evil powers are to be vanquished, it must be done using democratic means.
It turns out that the Phantom has his own ideas about that.
“He surprises a militant group with stolen weapons. The general, depicted with beard and beret just like Che Guevara, explains that they must arm in order to win their fight,” Robert Aman explains.
The Phantom disappears into the wide forests without taking action.

The political cultural life of the 1960s and 1970s also comes through in the comics.
Robert Aman gives an example: A book by Sara Lidman entitled “Gruvan” was published in 1963 discussing the appalling terms of employment in the government-owned mining company LKAB.
The Phantom visits the gold mines of Africa.
Writers such as Per Wästberg and Jan Myrdal stood in the centre of a sociological discussion of oppression and capitalist exploitation.
The Phantom uses intrigues in the corridors of power to force white landowners to return the land they had stolen in the past. The readers are given a history lesson about the colonial slave trade, which is still continuing, albeit in different forms.
And the writers put the Phantom right in the middle of the fight against apartheid.
“When Nelson Mandela was released from prison, his first foreign visit was to Sweden, to thank the Swedish people and Olof Palme for their significant support of the ANC. Maybe he should also have thanked the Phantom,” laughs Robert Aman. 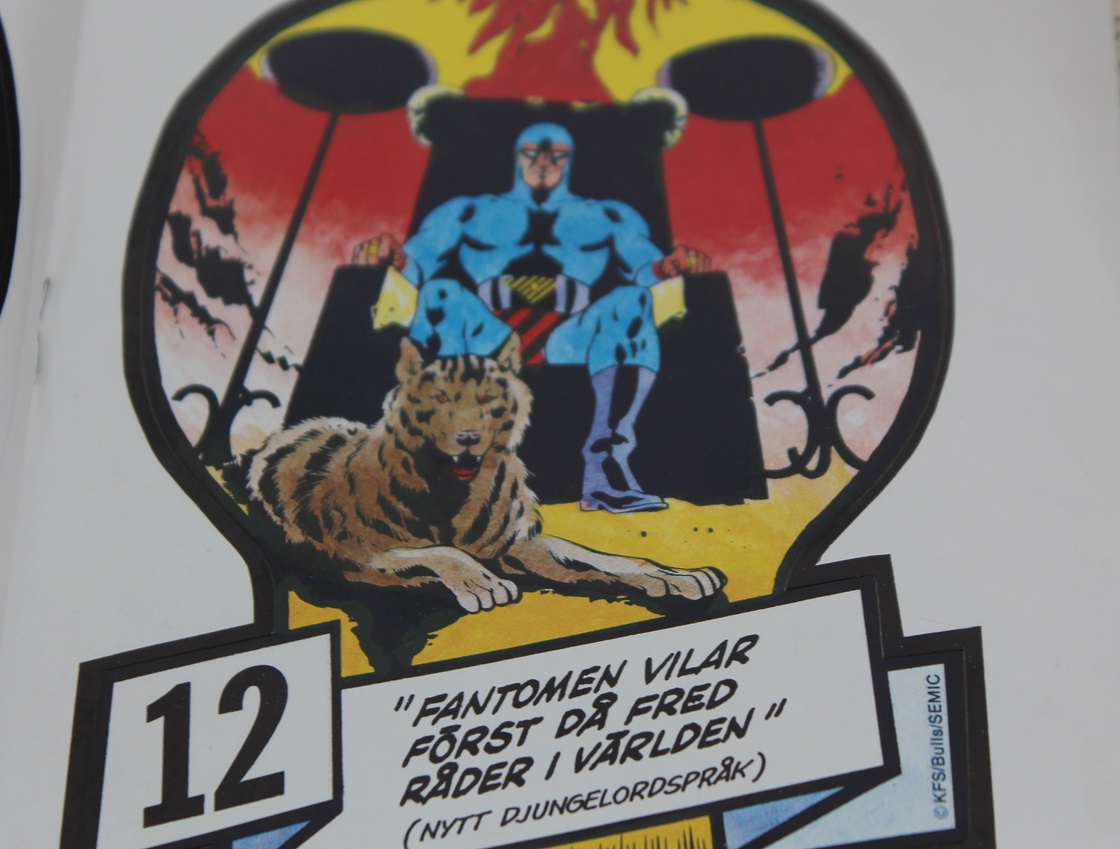 Nytt djungelordspråk Photo credit: Gunilla PravitzEventually even the strongest left-wing streams ebb out. The Phantom takes on new opponents.
Now it’s Polish nationalists who take a punch in the face. This sort of thing causes ripples across social media. Huge numbers of comments.
“Most of them positive,” says Robert Aman.

The Phantom gives hope to humanity.
In 1986, Swedish youngsters sit reading while drinking blue Phantom drinks, eating Phantom sweets, surrounded by Phantom souvenirs from a trip to the Phantom theme park in Eskilstuna. They turn their rings with the Phantom’s skull insignia and come up with new old jungle sayings to print out as sticky labels: “The Phantom doesn't rest until peace is upon the world".

Photo: The Phantom in comic strips © KING FEATURES SYNDICATE. INC./DISTR. BULLS/EGMONT
NB: The cover images and the comic strip panels have been cropped.