Forensic medicine is used to investigate what has happened to a person or a patient, often in order to help the justice system in various ways. 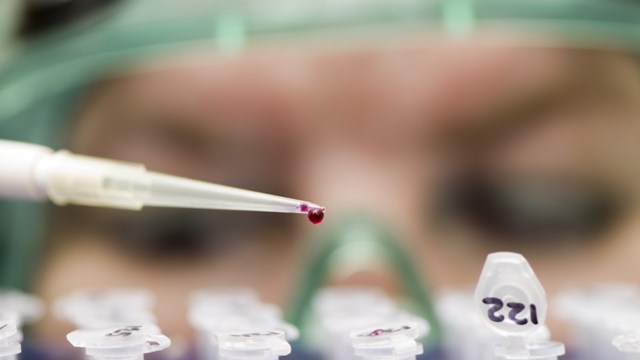 Forensic genetics can cover many different areas of genetics. At RMV, genetic analysis is carried out to assist the Swedish justice system. The purpose of the analysis is, for example, to indicate genetic similarities or differences between individuals, or to determine the identity of o person or a species.

The most common type of analysis is maternity or paternity analysis, where biological relationship can be proven or disproved. By using DNA analysis, it is also possible to investigate if a part of a skeleton, for example, is from an animal or a human being.

RMV also analyses, as part of an investigation, unexplained deaths in young persons. In this case, a possible underlying genetic change is sought that may be the cause of sudden cardiac death.

The scientists also interpret the analysis result, write reports based on statistical calculations, such as the probability of a given familial relationship. Sometimes, the scientists appear in court as expert witnesses.

Pharmacogenetic and pharmacological analysis unites the two areas of forensic genetics and forensic toxicology. A pharmacogenetic analysis entails studying the genetic background to why people react differently to certain medications. In these cases, both the genetic prerequisites of an individual to metabolise a given medication and the amount of metabolites from this medication in the body are determined. This is because an individual may lack the genetic prerequisites to metabolise a medicin which means that he/she may suffer side effects, including fatal ones, even with a normal dosage of the medication. Scientists from RMV assist in this work.

Within forensic chemistry, or forensic toxicology, the scientists at RMV help the justice system to determine the presence of alcohol, illegal drugs, medications and other substances in samples from persons who are the subject of a judicial investigation. This applies to the investigation of deaths and accidents and to living persons who have, for example, driven a car while intoxicated.

As part of the investigation of the cause of death in forensic autopsies, toxicology data is analysed in samples from the deceased. Within this area too, the scientists interpret the analysis result, write a report in those cases that need it and appear in court as expert witnesses. Have a look at the inside of a human being. In this installation, with the help of an easy to use multi touch interface, the user can freely interact with stunning volumetric 3D datasets of real scanned human bodies. The datasets in this demo have been created with state of the art techniques within medical imaging; Dual Energy Computed Tomography and by using new methods in the field of Magnetic Resonance Imaging. The data has been imported straight from the scanners and has not been edited or modified before rendering, what you see is not a 3D model, its a full volumetric description of a human body.The visualization techniques used in this table is already utilized successfully as a compliment to the conventional autopsy. Apart from avoiding cutting in the body the medical experts, such as coroners, can see things that are difficult to discover in a conventional autopsy.

Researchers are involved in the campaign to make designer drugs illegal as quickly as possible. Henrik Gréen investigates how new psychoactive substances act, and why some designer drugs are more lethal than others.