Mo1.33C MXene combines the metallic conductivity with the hydrophilic nature of surface termination, which make it an ideal additive for aqueous solution of PEDOT:PSS. In this project, we are aiming to evaluate Mo1.33C MXene-assisted PEDOT:PSS as the hole transport layer (HTL) for high efficiency polymer solar cells. We expect that this work can further extend the applications of Mo1.33C MXene in photovoltaic devices.

Cerium oxide nanoparticles (CeNPs) have enzymatic antioxidant capabilities targeting several types of reactive oxygen species (ROS). CeNPs´ antioxidant/ROS-scavenging properties have been clearly presented and CeNPs are considered to have high potential use in the treatment of ROS-related diseases such as cancer, neurodegenerative diseases, chronic inflammation, etc. The antioxidant capability originates from cerium´s capability to shift between oxidation states 3+ and 4+ in presence of ROS. However, a complete understanding of the underlying antioxidant mechanism is still unknown. In this Cenano-project we are combining experimental and theoretical efforts in order to expand the understanding of CeNPs’ antioxidant properties.

In our recent work [Scientific Reports volume 8, Article number: 6999 (2018)], we presented experimentally achieved and theoretically modeled NEXAFS spectra, describing the electronical configuration of cerium´s oxidation states 3+ and 4+. We also showed that implementation of gadolinium into the structure of CeNPs promotes the 3+ oxidation state, which can shift the scavenging capability of CeNPs to have higher superoxidase mimetic activity. In current work, we are investigating the distribution of gadolinium within the CeNPs, by performing HRTEM-EELS measurements in collaboration with Professor Per Persson (Thin Film Physics) and also carrying out theoretical modeling for finding out the most energetically favorable distribution of Gd atoms in CeNPs.

Theoretical Characterization of Point Defects in Silicon Carbide and Other Materials

Effective engineering of materials defects and defect properties on the atomic (nano-) scale is crucial for creating materials for applications in nanotechnology, i.e., ultra-miniaturization of sensors, storage, processing, and communication. Silicon carbide (SiC) is a large bandgap semiconductor that is in focus for its potential for applications in quantum information processing.

It appears possible to engineer defects in SiC with optical and spin properties that are suitable as single photon sources, and states with long enough lifetime to act as qubit memory. We have automated the setup of ab-inito calculations for several forms of point defects (impurities, interstitials, vacancies, and their complexes.) We are using this to perform a systematic large-scale computational study to enumerate a wide range of point defect properties, in particular, photoluminescence lines. The resulting database of predicted defect properties will be used for identifying defects that appear in experiments, explain their physics, and find out how to engineer them with desired properties to target nanotechnology applications. We are also working on extending the automated tools to other host materials. Our present activities build directly on last years successful CeNano project, where the automated tools we developed and demonstrated to give results in agreement with known experimental results for a few intrinsic defects. This year we are scaling up the effort to produce full data sets of defect systems of direct research interest. 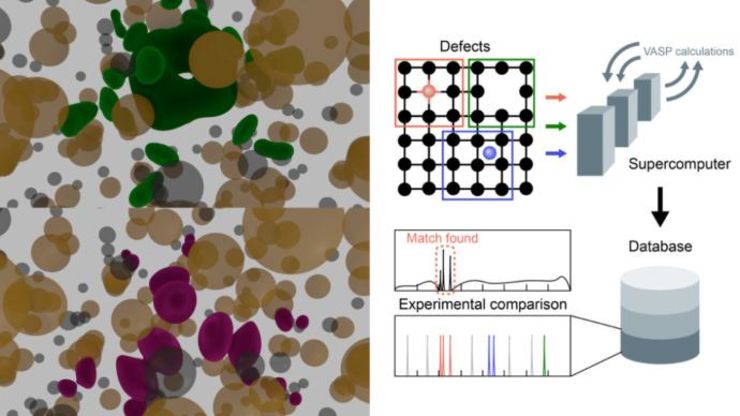 Left: Electron defect orbitals for a divacancy in 4H-SiC from ab-inito calculations for predicting photoluminescence lines. The pictures show the host material Si (brown) and C (black) atoms, the ground state (purple) and a state where the electron has been exited by a photon (green). Right: A schematic of the high-throughput scheme used for building a database of defect data to use for identification of unknown defects and predict their properties.

Considering that displays and lighting in daily life accounts for a substantial proportion of energy consumption, efficient light-emitting devices (LEDs) would play an important role in reducing energy consumption. Recently, a new generation of LEDs based on organometallic halide perovskites (PeLEDs) has been proposed. Perovskites, of which formula is AMX3, have exceptional semiconducting properties and can be easily available from solution process. Therefore, PeLEDs are promising to open up a new route for low-cost and efficient displays and lighting applications. PeLEDs have progressed rapidly since 2014. Green and red PeLEDs with external quantum efficiencies over 10% have been reported. However, the development of blue PeLEDs far lags behind their counterparts. 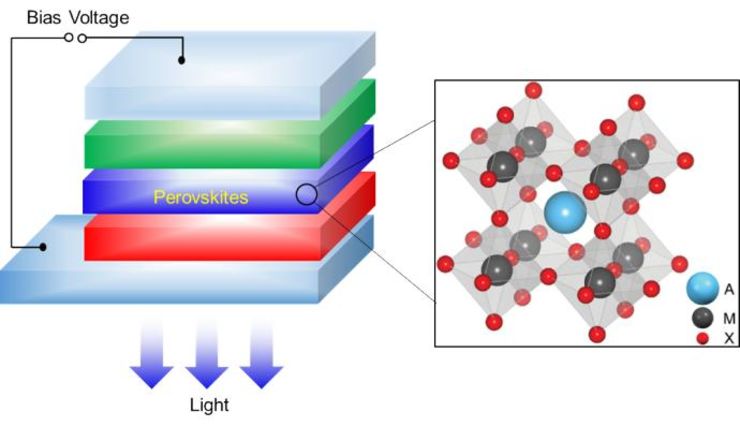 MCrAlY (M=Ni and/or Co) coatings are widely used to protect superalloy components in gas turbines from oxidation and corrosion at operating temperatures up to 1000 ⁰C. The formation of a stable, dense, continuous, and slow‐growing α‐Al2O3 layer at the gas/coating interface is essential for the coatings durability. The kinetics of Al2O3 scale growth is complicated and depends on the initial transient oxidation stage, which in turn can be affected by surface treatment. A rapid transition to α‐Al2O3 is desired for a lower oxide growth rate. Hence, studying the initial oxidation stage and the effect of surface condition is important to improve coatings oxidation resistance.

The PSLS technique, capable of detecting and differentiating Al2O3 phases of low volume, appears to be a suitable tool for studying early stage oxidation of MCrAlY. In addition, residual stress developed in the protective scale can be derived. In this project, we will combine PSLS and SEM analyses to increase the understanding of oxidation behaviour of MCrAlY coatings. Planned project work includes: 1) study of the effect of surface condition and coating composition on alumina development with regard to improved oxidation resistance; 2) correlation of the scale spallation behaviour and residual stress; 3) further development of the technique of alumina scale identification through optical microscopy. 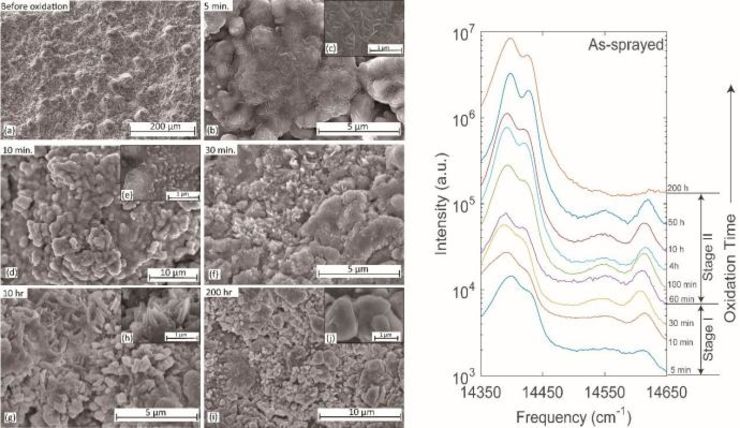 Ischemic Heart Disease is the major cause of death both in the western world and globally. If left untreated necrosis can appear 5-6 hours after the attack. The ability to detect if a heart infarction has occurred as soon as possible is crucial, time is of the essence to minimize the damage.

In this project we will combine the relaxivity properties of iron oxide nanoparticles with a model system with cultivated heart cells to develop and characterize a fast troponin sensitive detector that can detect from a blood sample if a myocardial infarction has occurred. The selective binding of troponin to the nanoparticles will induce relaxivity changes, T1 and T2, and enable us to measure the concentration of troponin to evaluate if a heart attack has occurred or not. Binding events as well as kinetics can be observed in changes of T1/T2 values due to the nanoparticles troponin coordination inducing among others, changes on rotational values. Ultrafast response is expected and coupling mechanisms to nanoparticles in a first step antibody, later affibodies, with high affinity for troponin4 therefore we expect this approach to enable us to detect presence of troponin down to today’s threshold limit or even lower. The long-term goal for this collaboration is to develop and characterize a nanoparticle-based detection system for troponin that can be used in the field as well as in the hospital to diagnose the patient. If this can be done quicker than today’s methods, we can decrease the damage from heart attacks and in best cases prevent death. 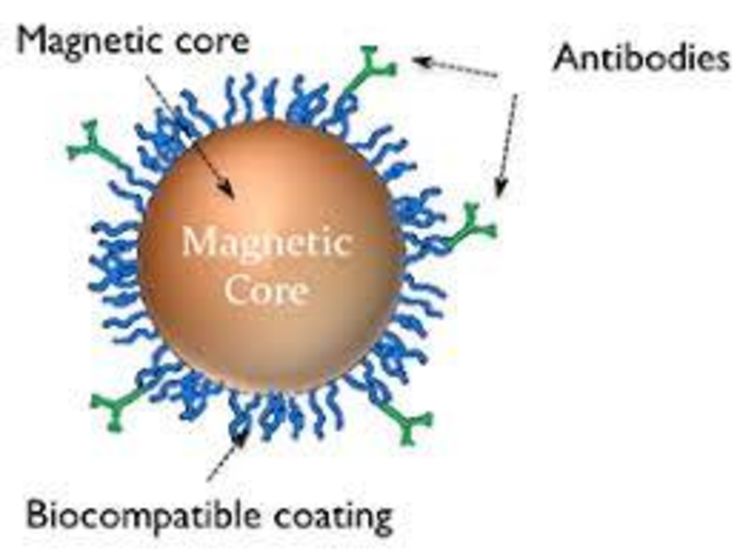 Introduction. Recently we have been investigating naturally occurring chiral (helicoidal) structures of chitin and cellulose found in both animals and plants. Due to the periodicity and helicoidal arrangements, these structures show interesting optical phenomena such as beautiful colouring, iridescence and polarization effects. The structures, referred to be of

Bouligand type, can for instance be found in species belonging to the orders Stomatopoda and Coleoptera. We have previously focused our attention to Mueller matrix Spectroscopic Ellipsometry (MMSE) of beetles of the Scarabaeidae family and has shown how the exocuticle of many of these beetles reflect polarized light with polarization states from linear to near-circular depending on incident/viewing angle and wavelength. By comparing with optical models, we can obtain information on thicknesses, pitch distributions and more. The findings are also in good agreement with the results from electron microscopy and atomic force microscopy. Structures of Bouligand type can also prove to have outstanding
mechanical properties. A good example is the extreme hardness and damage-tolerance of the stomatopod dactyl clubs.

This project will be a part of a larger effort where we will expand and develop the research on Bouligand structures according to several cross-disciplinary and interlinked paths. The main activities related to the Cenano project will be:
1. Fabrication and optical characterization of chiral structures grown by magnetron sputtering of InAlN-structures.
2. Studies of the mechanical properties of the fabricated structures with the aim to enhance the hardness in a similar fashion as the natural structures.
3. Studies on chemical properties of InAlN-structures including how to fill the structures with molecules/monomers or biopolymers
4. Studies of polymerization of monomers within InAlN-structures
5. Optical and mechanical studies of the InAlN-organic composites
Twinning. The last three activities will form a twinning project involving the students and their divisions. The effort can lead to modification of both optical and mechanical properties. For example, we can aim to prepare composites between InAlN and polymers having different glass transition temperatures that may give temperature responsive materials. In addition, composites including strongly light absorbing or luminescent monomers/polymers can give rise to interesting optical effects. The combination of a helicoidal structure and a filling material can in comparison to some natural structures prove to be extremely tough materials. That is, the twinning opens for a rich variety of possibilities and has high potential to result in something extremely interesting.

The cells are structural and functional units of life. The cellular compartments require proper conditions to perform their normal functions. Intracellular pH is an essential factor that regulates many cellular behaviors, including proliferation and apoptosis, as well as enzyme activity and protein degradation. Disruptive variation in the pH may lead to dysfunction of the organelles. Therefore, accurate monitoring of pH variations inside cells is important for the early diagnosis of diseases and prior to the treatments. Fluorescence spectroscopy for quantitative measurement of intracellular pH is a direct and useful tool for cellular diagnosis because of its non-invasiveness, high sensitivity and specificity, and high signal-to-noise ratio. Herein, we fabricated a functional pH probe based on a new biocompatible nano platform, where Pluronic® F127 is used as a surfactant to dope dyes/molecules and confine the growth of the silica NPs in a range from 5 to 90 nm. The tailored pH-sensitive nanoprobe containing dual-responsive components for acidic and basic pH for giving ratiometric fluorescent responses. It exhibits a linear relationship in pH 4.5-8.5, which covers most of the pH ranges needed for biological applications. Importantly, the pH responses are reversible between pH 4.0 and 9.0. The plan for bio-application is to apply the tailored probe to monitor both the intrinsic pH of the tumor cells and changes of the pH during treatment in the lysosomes and in the cytosol. The long-term goal is to use this non-invasive method to predict treatment responses in the tumor cells and thereby to get the possibility to tailor the treatment. 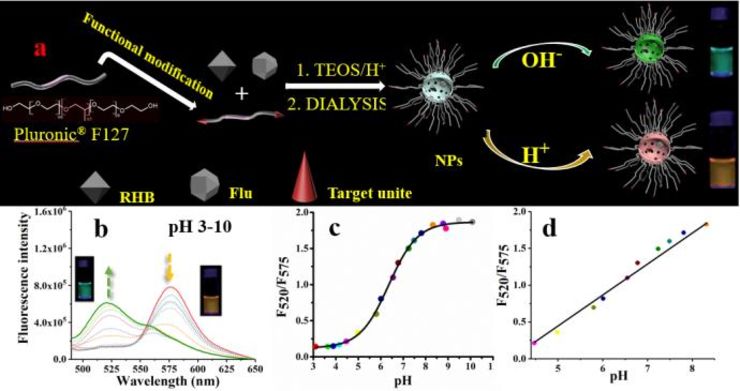