Lysosome, as one of the vital organelles, which has assumed an increasingly pivotal role in "intracellular digestive tract." They are used for the digestion of excess or worn out organelles, food particles, and engulfed viruses or bacteria under rather acidic conditions (pH 4-5). Abnormal pH values in lysosomes can result in malfunction of enzymes and consequently lead to many severe lysosomal diseases. Because of the critical importance of pH for lysosome to function properly, it is essential to have simple and effective methodologies for the rapid, selective, and sensitive determination of lysosomal pH values in biological specimens. Fluorescence spectroscopy by using ratiometric probe offers an appealing approach to quantitative determinate the intracellular pH of intact cells and subcellular regions. Fluorescence resonance energy transfer (FRET) process has been widely adopted for ratiometric detection because of its facile control as a sensing mode and its basis on well-established theory. However, this architecture is sometimes problematic for obtaining ideal ratiometric FRET probes as most fluorophores usually encounter notorious aggregation-caused quenching (ACQ) properties, which make it harder to achieve strong donor emission and high energy transfer efficiency. In contrary, aggregation-induced emission (AIE) fluorophores endow luminescent materials with strong fluorescence intensity in the aggregated formation without self-quenching of fluorescence. Surely, the most sensible thing would be adopted AIE compounds as donors in FRET systems, which can avoid the limitations of ACQ-fluorophore based donors and will enhance their development and potential for usage in a biological application. 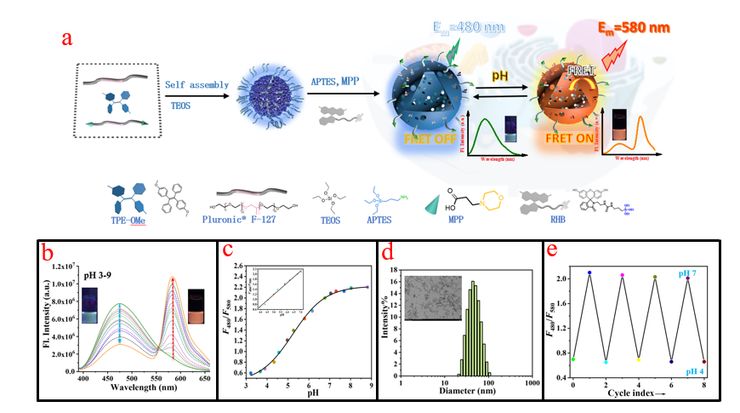 MCrAlY (M=Ni and/or Co) coatings and PtAl coatings are frequently used to protect superalloys against high temperature oxidation. Formation of a stable, dense and slow-growing α-Al2O3 layer offers great oxidation resistance. However, the growth of metastable alumina phases is not desired for its high growth rate. In the previous project (2018), effects of surface treatment on the alumina growth behaviour on MCrAlY coatings were analyzed. In the new project, we plan to compare the oxidation performance of MCrAlY and PtAl coatings. PtAl coating, also a good alumina former, has been widely used in industrial gas turbines and aero engines for oxidation protection. These two types of coatings both show great potential: MCrAlY type is more flexible in the choice of alloy composition, PtAl coatings show better performance at a thin thickness, which is critical for aero engines application. Therefore, it’s important to understand the different alumina growth mechanisms between two types of coatings so that it’s possible to give guidance on choice of coating system for different service conditions. PSLS has been used to characterize the properties of such TGOs and demonstrated to be a useful tool. The current project will use PSLS and microstructure analysis to study the Al2O3 development on PtAl coating. 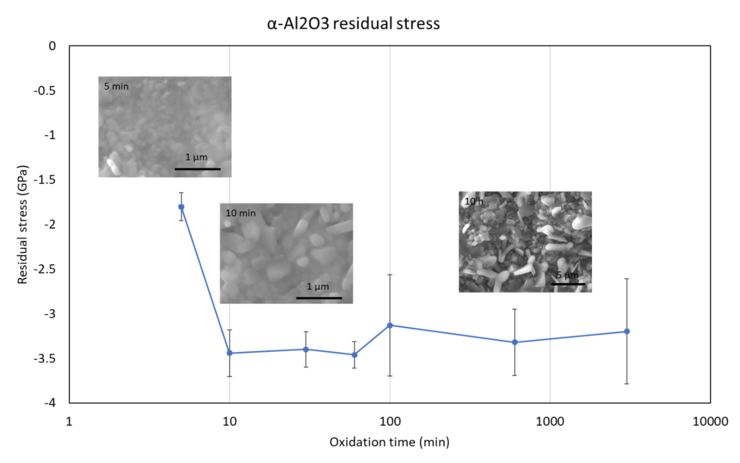 Evolution of residual stress of α-Al2O3 formed on shot-peened PtAl coating during oxidation at 1000 °C and corresponding oxide scale morphology.

Our fascination with goniochromatic phenomena (iridescence) exhibited by the exoskeleton of Cetonia aurata has fueled much of our motivation to try and understand the optical characteristics of its microstructure. Apart from the brilliant colorful metallic lustre, a change in the polarization state is also observed for light reflected off its surface, ie. unpolarized light reflected off the skin surface of these beetles changes to near-circularly polarized light. This is because they have their outer skin composed of multiple lamellae of helicoidal structures (collectively referred as Bouligand structures) and the interaction of incident light with these anisotropic structures results in this change in polarization. With this project we aim to expand our understanding of growth mechanisms and elucidate the microstructural features, by impregnating our inorganic films with organic proteins / polymers to develop conjugate assemblies exhibiting synergistic optical and mechanical properties. As a part of this interdisciplinary approach, the following activities will be attempted in this project:

Preliminary chiral structures have been grown, pathways for protein incorporation have been decided and efforts are underway towards morphological refinement. With these Inorganic – Organic Composites, we believe the twinning of our respective expertise will pave various possibilities for further cross-disciplinary research.

Refractory transition-metal (TM) diboride thin films exhibit a combination of unique properties which are significantly dependent on their elemental compositions and nanostructure. Recently, we have increased simultaneously both hardness and toughness, which is the combination of hardness and ductility, of ZrB2, as a TMB2 model, by alloying with Ta and changing the nanostructure from B- to Ta-rich column boundaries together with a decrease in column size to ~8 nm. However, the big challenge from the application point of view is that TMB2 thin films usually show low corrosion resistance. Since the grain boundaries of these materials contain a significant amount of boron, boric acid can easily form at these susceptible regions leading to a high corrosion rate when TMB2 are immersed into solutions containing H+ ions. We expect that Zr1-xTaxBy thin films with Ta-rich column boundaries can be a promising candidate for replacing ZrB2 with much better corrosion properties. Alloying TMB2 with Ta, which is a highly corrosion-resistant element and segregates at grain boundaries, is expected to significantly hinder corrosion attacks. 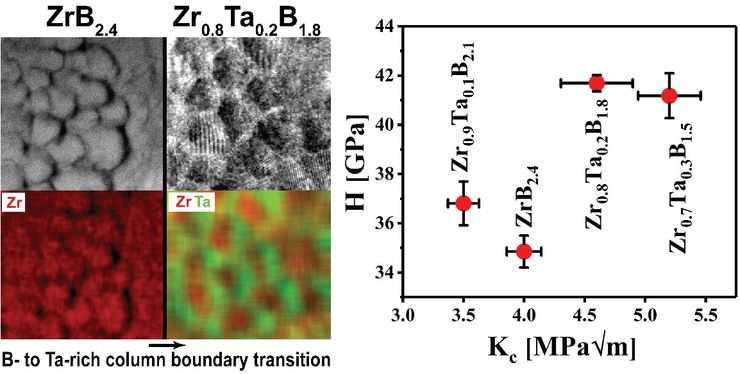 Over the last years, there has been a growing interest to apply nanoparticles (NPs) for disease diagnosis and treatment in biomedicine. When NPs are introduced in-vivo, proteins will in most cases attach to the NPs and consequently form a NP-protein complex referred to as the protein corona. The “true identity” of the NPs will determine/control the composition and quantity of the of the protein corona. The attached proteins will act as identity tags for specific body responses such as immune activation. Organic coatings may be necessary to reduce protein corona formation, associated with immunogenic responses in the body.
We have integrated gadolinium in cerium oxide NPs (Gd-CeNPs), to obtain dual functionality, i.e., superior contrast enhancing properties for magnetic resonance imaging (MRI) and remarkable capabilities for scavenging reactive oxygen species (ROS). In this CeNano project as-prepared and dextran coated Gd-CeNPs are investigated by full characterization and detailed evaluation of the protein corona formation. This work is done to investigate the biological responses and further explore the potential for NPs in biomedical applications. 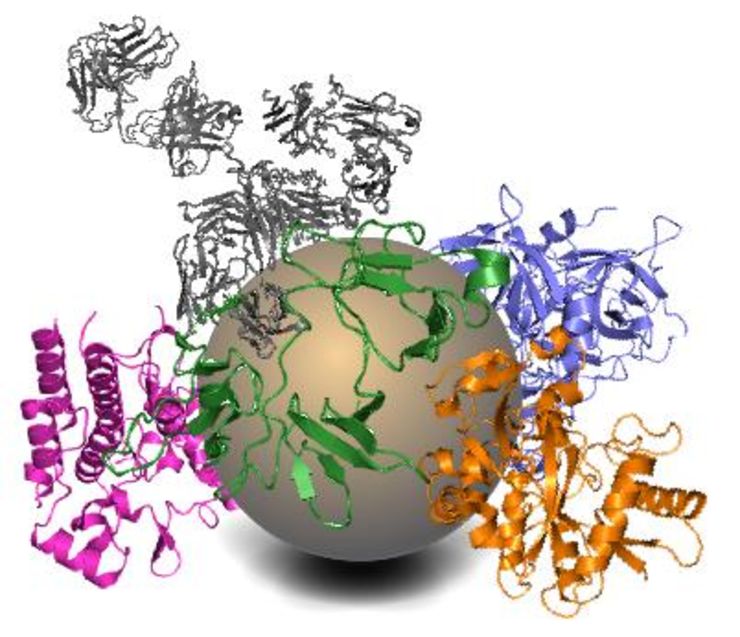 Our last CeNano project from 2017 focused on hybrid sensors of iron oxide nanoparticles on top of epitaxially grown graphene on SiC. This led to significant breakthroughs for the detection of toxic VOCs such as benzene and formaldehyde. We were able to detect those toxic gases down to concentrations of only 1 ppb (parts per billion), which is almost two orders of magnitude lower than the annual average safe level of exposure recommended by the World Health Organization for formaldehyde.1 Nevertheless, iron oxide has its drawbacks, especially in terms of strong cross-sensitivity to relative humidity In this project we aim to build upon the experience gained from the previous collaboration, and through the exploration of novel hybrid-graphene materials to move towards a material platform that allows graphene hybrids with tailor-made analyte interactions, while maintaining the high sensitivity. 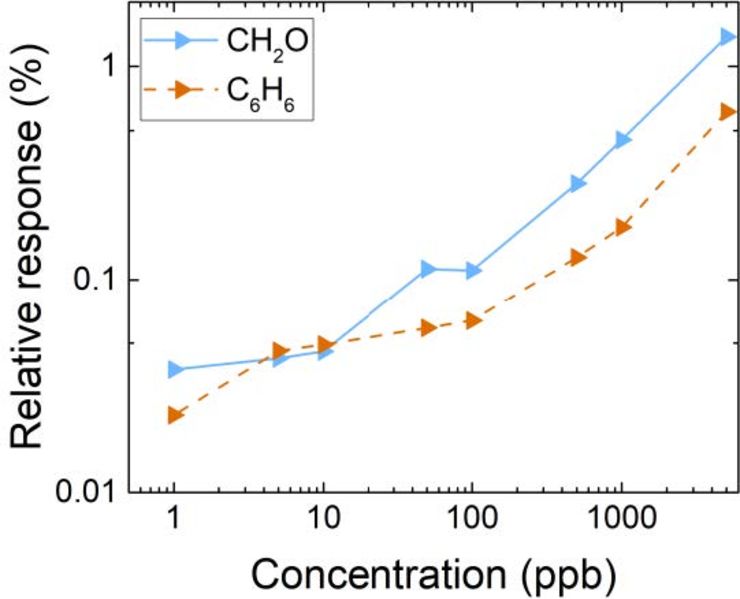 Figure 1: Relative response of Fe3O4 nanoparticle decorated epitaxial graphene for CH2O and C6H6 exposures at 150 °C at 0 %RH. Adapted from 1.

Considering the increasing demand of high-quality displays, efficient light-emitting diodes (LEDs) with wide color gamut and high color-purity are desired. In recent years, a new generation of LEDs based on organic-inorganic hybrid perovskites (PeLEDs) has gained significant attention due to their fascinating properties such as low-cost solution-processability, high photoluminescence quantum efficiency, easily tunable bang gaps (from ultraviolet to infrared), and narrow light emission linewidth. So far, infrared, red and green PeLEDs have got rapid progresses with external quantum efficiencies from less 1% to over 20% in the past five years. However, the blue PeLEDs still face key challenges of low efficiency and color instability.

In the project titled “Towards Efficient and Stable Deep Blue Light-Emitting Diodes”, we aim to understand basic scientific questions in blue-emitting perovskite materials and improve their device performances by developing new materials and novel device structures and investigating new properties. We aim to develop efficient and stable deep blue PeLEDs based on in situ synthesized perovskite nanocrystal films. The in situ synthesized perovskite nanocrystal films will employ the quantum confinement effects to tune the emission colors of the blue perovskites, avoiding the use of unstable mixed halide perovskites.

Magnetic-Nanoparticle mediated manipulation of cells in a hydrogel matrix

Hydrogels are highly-hydrated crosslinked polymer networks that can exhibit biomimicking properties such as extracellular matrix (ECM) substitutes in a wide range of biomedical applications. Furthermore, they can act as a step between two-dimensional surfaces and in vivo experiments.

Two cell types will be used: Neutrophils are the most abundant of the white blood cells in humans and Neuroblastoma cancer cells.

In this project, we will combine the magnetic properties of FeNPs with the in vivo-like environment of the hydrogel to control cell movement/growth. The goal is to be able to control movement and growth of cells within a hydrogel in order to customize and optimize, for example neuron patterns and osteoblasts.

The Cell Clinic enables monitoring of cell cultures by measuring the capacitance of the culture. The capacitance will vary with factors such as cell morphology and secreted species. By introducing a Transwell® membrane into the Cell Clinic we can separate the contribution of cell morphology from the signal. The cells are activated using nanoparticles and the subsequent response is monitored using the Cell Clinic. The long-term goal of the project is to develop a label-free, real time, non-invasive assay to monitor the response of cells to nanoparticles and to detect ROS signal characteristics which are related to inflammatory processes on a cellular level.

The lead-free halide double perovskites class of materials has recently emerged as promising alternatives to lead halide perovskite, such as methylammonium lead iodide (“MAPbI3”), which have rapidly become one of the most important and intensively investigated class of semiconductors for optoelectronic applications. These lead-free halide double perovskites, including e.g. Cs2AgBiBr6 and Cs2AgInCl6, show superior stability and do not contain toxic Pb. Unfortunately, most of them have nonideal bandgaps and inferior optical absorption.

This CeNano project is a joint theoretical and experimental investigation into alloying of lead-free halide double perovskites, with the aim of improving their performance in optoelectronic devices. One main focus will be on the effect of the distribution of the alloying elements on the nano-scale. Our initial focus will be on Cu-doping in Cs2AgBiBr6.