Industrial symbiosis may be the solution

Michael Martin of the Division for Environmental Technology and Management shows in his PhD thesis that industrial symbiosis may be one way to reach EU targets for biofuels. He also introduces a method for calculating the contribution from individual companies.

The EU environmental targets for biofuels are ambitious, much too ambitious in many people’s opinions:

By 2020 we should have reduced energy use by 20 %; 20 % of the energy will come from renewable resources (10 % of vehicle fuel) and carbon dioxide emissions should be reduced by 20 % (compared with 1990 levels). The EU has also decided that in new appliances, biofuel should release 50 % less greenhouse gasses by 2017, compared with being run on fossil fuels, and 60 % less emissions by 2018. 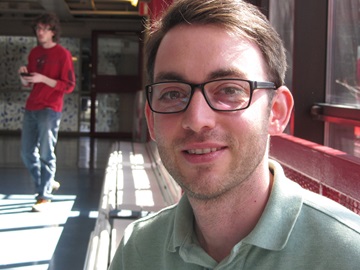 Photo credit: Monica WestmanSo far these targets have not been considered achievable with current technology, the hope rather being for second-generation biofuels, namely gasification of cellulose-based raw materials in large energy plants – something that requires large-scale investment.

Michael Martin“The technology is not currently commercially available and there is no investment, so it is highly doubtful if it has a future in practice,” says Michael Martin, a newly-minted doctor in the Division for Environmental Technology and Management, IEI.

But his thesis does provide some hope; there is actually another way. This involves making better use of the systems and technologies we already have.

Martin studied what is known as industrial symbiosis, with a concrete example of the energy combine at Händelö, outside Norrköping.

In Händelö, both ethanol and biogas are produced in efficient processes where a number of companies work together so that waste and by-products from one industry become raw materials in another. The major participants in the combine are EON’s combined heat and power plant, Lantmännen Agroetanol and Svensk Biogas.

Energy combine at HändelöEON’s district heating plant produces large quantities of steam, using household waste, recycled wood, forest residue and other waste products. The steam is pressurised and used to drive a turbine, and the pipeline then splits, with one branch delivering steam for the manufacture of ethanol from grain at Lantmännen Agroetanol while the steam in the other branch of the pipeline is condensed and used as warm water in the district heating system.

Waste products from ethanol manufacture are dried into pellets and used as animal feed. Another waste product, known as “dregs”, goes into biogas production. Biogas is manufactured from food waste, slaughterhouse waste and other organic waste matter. Digested residue is returned to the agricultural fields in the form of biofertiliser.

“If we could make use of even more waste and by-products, such as frying oil from hamburger restaurants, slaughterhouse waste, waste from the food industry and so on, and combine these with a more efficient use of resources in an industrial symbiosis, it would be possible to reach the targets,” he says.

There is also another level to the scientific contribution from this thesis. Martin has developed a method, and can also provide recommendations, regarding how to calculate the concrete benefits of industrial symbiosis for any individual company. The method is based on the same principles used for life cycle analysis of a product or process.

“I suggest what should be included in the calculations to make them as usable as possible. There hasn’t been a method like this before. For example, if we calculate separately for Lantmännen Agroetanol, we see they have already achieved the EU-targets,” Martin says.

Martin came to Sweden as a master’s student at the KTH Royal Institute of Technology, then came to Linköping University as a PhD student in 2007 and is now continuing his research as a post doc at the Division for Environmental Technology and Management. He was born and raised in Flint, Michigan, which is the original home of General Motors, and he has been surrounded by cars and exhaust fumes his whole life, but he was also close to the Great Lakes.

“I love hunting and fishing and I enjoy life in Linköping where everything is close by and you can ride a bicycle to work,” he says.

In addition to research at the Biogas Research Center, he also studies and compares the ethanol industries in the United States and Sweden.

“There are ten large ethanol factories just in Michigan, and several of them have advanced production processes.


Thesis Industrial Symbiosis in the Biofuel Industry, Quantification of the Environmental Performance and Identification of Synergies, Michael Martin, Department of Management and Engineering, Linköping University, 2013.