A project and an exhibition area that deals with the meeting between knowledge and art. The exhibitions can be found in the entrance to Kåkenhus, opposite Täppan on Campus Norrköping.

The artwork will be shown on Bredgatan between Täppan and Kåkenhus in Norrköping from 19 September, during the Culture Week and throughout October.

The artists Cecilia Parsberg and Erik Pauser, together with the architects Haval Murad and David Martinez Escobar, have created a sculptural installation that reflects cracks in society. The film sculpture Huset started its journey at Odenplan to continue in other public places in different cities in Sweden. The sculpture has the shape of a house that has turned over and looks like it is sinking. The short film 'A place in Europe' is shown on the underside of the sculpture. The film tells about a hidden place in a big city that has become a home for job-seeking migrants who have fallen between the cracks in Europe´s free movement. The narrator is Thomas, who for three years has sleeped in this place, with rats under a loading dock. Now he's about to be evicted. He represents those who want to do right by themselves: work, support their family, live a dignified life. Modern poverty force many to become nomads in European cities.

More information on A Place in Europe 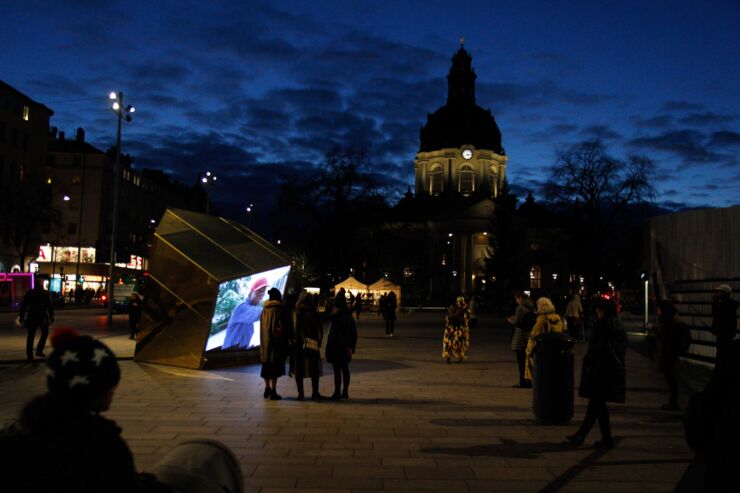 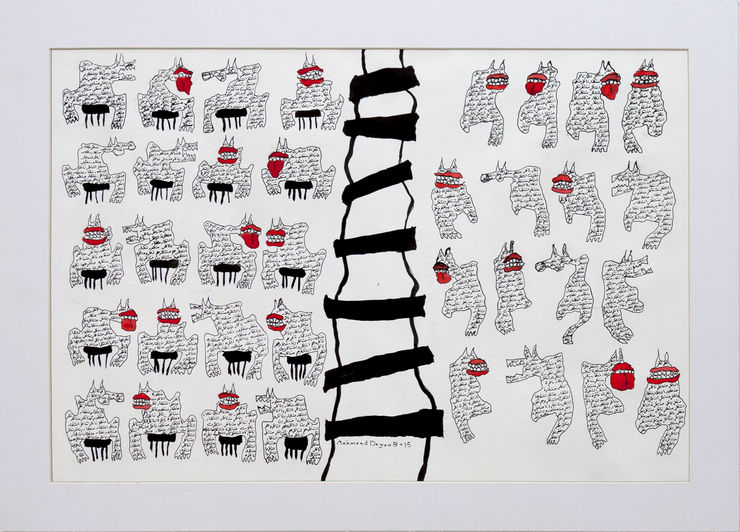 This is an exhibition space set up at Kåken hus on Norrköping Campus,  to communicate, confront and contextualize research on Campus.  The project is run by Erik Berggren and receives financial support from Riksbankens Jubileumsfond and the research council FORMAS. 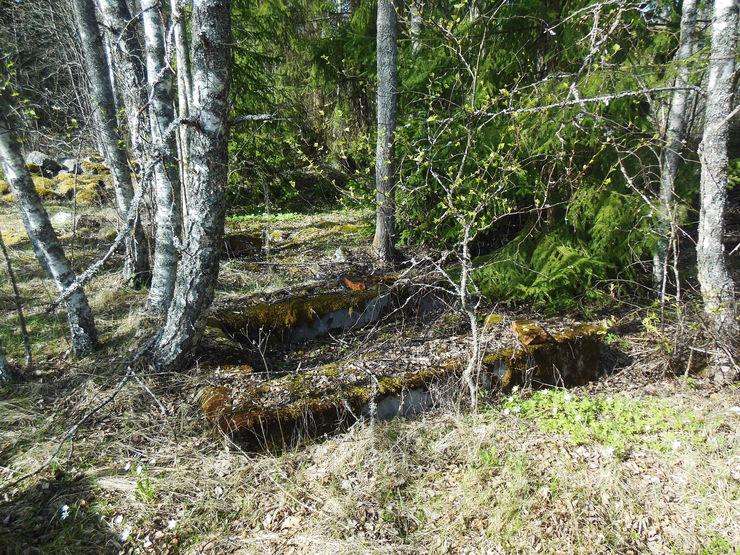 During World War II, neutral Sweden served as an uncertain waiting room for nearly two hundred thousand refugees from the war in Europe. The country was surrounded by warring countries and the Swedish government tried to maintain a balance act, in order to stay out of the war. It was relatively rare that people who had fled to Sweden were deported. The refugee camps indicated two things, on the one hand the right to asylum, which already existed through the 1937 Aliens Act and which was actually upheld and on the other hand, on the state's nervousness towards the refugees. It was about giving protection to those who came but also to protect against the risks to the security of the kingdom.

In this wobbly situation, a space was opened up for both a positive reception but also suspicion. In addition, there were German-friendly actors within the Swedish police and the military. It was this reality that the refugee was confronted with.

The refugee camps around the country became intersection points where the foreign met the local - the traces of these events lie  in people's memories, in the archives and in the actual places of these camps. This is part of our Swedish history, a contemporary cultural heritage that can be read in several ways. The traces of the camps in the landscape are also traces of the authorities’ attempts to control people they did not trust in an uncertain time. The project In Custody is two artists' exploratory meeting with these sites. The traces are mostly gone but we know that something has happened where there are now seventy-year-old, logging mature pines and firs.

A new exhibition with two Syrian artists. Mahmoud Dayoub and Diana Jabi. They have fled the war in Syria and ended up in different parts of the world, yet their migrant journeys are not over. This is reflected in their art. The works we show continues the investigation of the theme, and existential condition, of waiting, that more and more people are forced to deal with today. The first exhibition on this theme was the drawings by Syrian artist Muhammad Ali - I am just a number. Now we continue to inerrogate with this artists what it means for the subject to be robbed of that essential aspect of the self, the control and ownership and negotiation with one´s time.

Me and The Train - Mahmoud Dayoub

Mahmoud Dayoub (Moved to Sharjah, UAE) obtained a B.A in painting from the Faculty of Fine Arts, Damascus University, in 2005. He has exhibited his work in the Netherlands, Sweden, France and other countries around the world. He is a multidisciplinary artist with a special focus on humanity and his approach to art-making spans across video, installations, painting, and drawing.

Diana Jabi ( moved to Romania for an unclear period)
She obtained a B.A in Engraving and Graphic Arts from the Fine Art Faculty in Damascus in 2004. In 2012, she gained an MA in Produccións Artistiques i Recerca from the facultat de Belles Arts, universitat de Barcelona (UB). She has exhibited her work in different countries around the world as Barcelona, France, Sweden, Italy, Finland and others.

I am just a number - Muhammad Ali, Drawings.

During the Spring 2019 Lobby will show two exhibitions that address waiting. Waiting that war entails and the waiting which the asylumprocess forces upon people. This is the result of a collaboration with the curator Abir Boukhari, who came to Sweden from Damaskus, Syria in 2015.

The first exhibition - ”I am Just a Number”- shows drawings by Muhammad Ali. It is an attempt to grapple with the number that was written on his arm upon arrival on Samos on his way to Sweden. This number can seem like a ticket to a queue and thus as representing a kind of order after the chaos of war. But it is just as much a symbol of the disorder of the asylum process in Europe for those that are forced to endure it.

The Refugee of the Sorrowful Figure
Paula Urbano

Paula Urbano met a man that applied for asylum, but got deported from Sweden. The film takes form during the year she followed him from Flen, Eskilstuna, Baghdad and Teheran. In her artistic practice Urbano explores existential uncertainty. A condition that arises when fundamental existential components are subject to uncalculated ruptures, are questioned or changed more or less drastically, more or less violently. In this case for the asylum seeking man: after deportation to Irak an unsafe country in war. With references to Don Quijote a meeting takes form that also concerns the task of the Artist. The viewer him/herself has to navigate through possible stories and is maybe confronted with his/her own prejudices along the way. 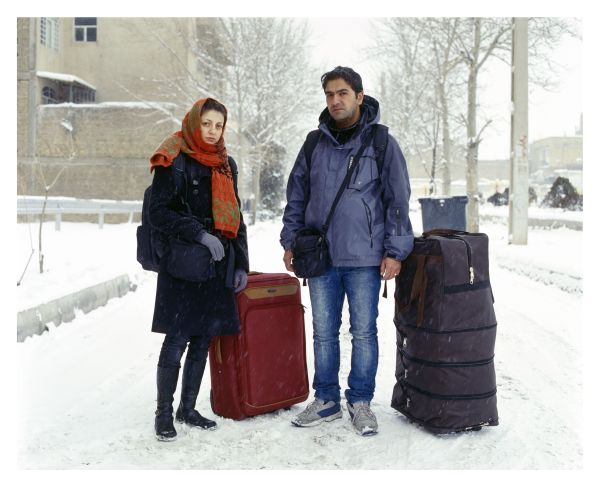 This ongoing series looks at the immigration of Iranian youths to distant countries, aspiring to find a better situation and lead a successful life.

They leave their own country, not to experience new things, but as a form of evacuation, like those who are flood-stricken and forced to seek refuge in a foreign land. This is a daily experience, visiting young students who are trying desperately to leave their country; some wishing to pursue their educational goals and others seeking permanent residency abroad. This project presents their last portraits, taken before theyleave their motherland, as a memory for them to hold, of a land that they may never see again.

This exhibition has been curated by Erik Berggren and produced together with a fantastic group of students from the Program of Ethnic and Migration Studies. Thanks to Esther, Samina, Joachim, Mischa, Gabriella, Chrissy, Mansi.  Also thanks to Glenn Dahlberg at LiU-service for all your help.

Movements - on migration and solidarity

This is an exhibition about movements. The movements of refugees, thats is a starting point, but here the focus lies on movements of engagement, knowledge and solidarity.

The photos taken by Renzo Arcuri, Celina Ortega Soto and Nedžad Mešić, exist because of their physical movement and their solidarity with refugees in camps in Greece.  Nedzads photos also captures the formation of a movement, an embryo to a union organisation among informal migrant workers in Northern Sweden - berry pickers.