What’s zero to the power of zero? When an eighth-year pupil asked that question, Jonas Bergman Ärlebäck, senior lecturer at LiU’s Department of Mathematics, had to rush over to a local primary school to discuss mathematics.

But isn’t the answer zero? 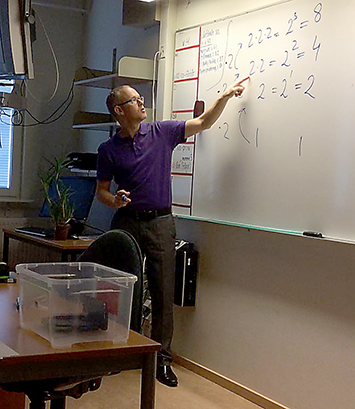 “Well, it’s not quite that simple. The pupils had discovered an exotic detail, of an almost mathematical-philosophical character. The answer could just as easily be one, or anything in between. It depends on how you approach and define the problem,” says Jonas Bergman Ärlebäck.

Your special appearance as extra teacher at the Skäggetorp Primary School was popular, and the school’s thank-you post on Facebook had been seen by 23,000 users after just a few days. Your reaction?
“I had no idea! That’s brilliant!”

And how did it go? Could you give the pupils an answer?
“Sure, but the answer isn’t that straightforward, as I just said. We discussed the problems involved, and thought through it together. I truly enjoy encountering their curiosity, and being able to help them make progress in their thinking. Getting them to realize that maths is much more than the four basic operations.”
“They had lots of other questions, for instance what is it like to study maths at university, how difficult are the maths problems in the engineering programmes, what we mathematicians do research on…We had lots to talk about – in addition to algebra and powers.”

Extra teacher for one lesson. Maybe more university teachers should try that?
“Depending on which field you work in, there are more or less natural opportunities for that sort of meeting. I work in mathematics teaching methodology and I teach future maths teachers at LiU, so it’s really rewarding to be ‘out in the field’ and to meet pupils. So of course I think it’s positive. And it can also be a good opportunity for pupils to meet professionals and get inspired to continue their studies.”

Why do you think the school asked you to come and visit this class? 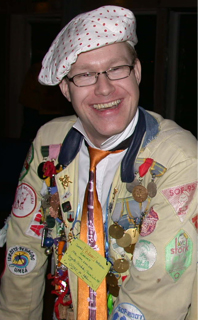 “It’s probably mostly because Skäggetorp Primary is progressive in its teaching methods. The teacher, Malin Ramström, has been a researching teacher in a collaboration on mathematics teaching between LiU, Norrköping Municipality and Linköping Municipality, that I also was involved in. So it was natural to get in touch with me.”

Could it also have to do with your past as a clarinet player in LiTHe Blås, a student band at LiU?
“Malin and I were actually both members of LiTHe Blås at the same time, back in the day. Extra-curricular activities often give you contacts for life, and these can come in handy when you least expect it.”