The Academy of the Municipalities

The Centre for Local Government Studies is a hub for research and collaboration in municipal and regional development. A close collaboration between academia and public bodies provides important insights for municipal strategies in current topics.

The Centre for Local Government Studies at Linköping University, founded in 1997, is a national scientific resource for the developmental work of municipalities and regions. Today, CKS has collaborative agreements with 13 municipalities and one region, and is led by a board where several of the members represent these municipalities.

CKS has two main areas of operation: CKS Research and CKS Learning. CKS Research focusses on three fields: Local politics and democracy; Local governance, organisation and welfare; and Local development and planning. These areas investigate the circumstances facing municipalities, and the municipalities’ strategies to deal with future challenges. Questions can include increased levels of supranationalism, prevention of corruption, conditions of elected representatives and political parties, new interfaces between citizens and municipalities, urbanisation, demographical changes, and sustainability from social, economic and environmental perspectives.

The other area of operation, CKS Learning, facilitates knowledge exchange between researchers, civil servants and politicians, where research can be disseminated and benefit society. For instance, together with collaborating municipalities in Östergötland, CKS Learning holds seminars where researchers from various universities present findings of relevance to municipalities; it arranges the annual Kommundag (Municipality Day) where the focus is on an issue of current importance to society; and, together with municipal leaders in the region, it co-organises a course called Leadership in Municipalities, aimed at senior managers in municipal administration.

The significance of the research for society 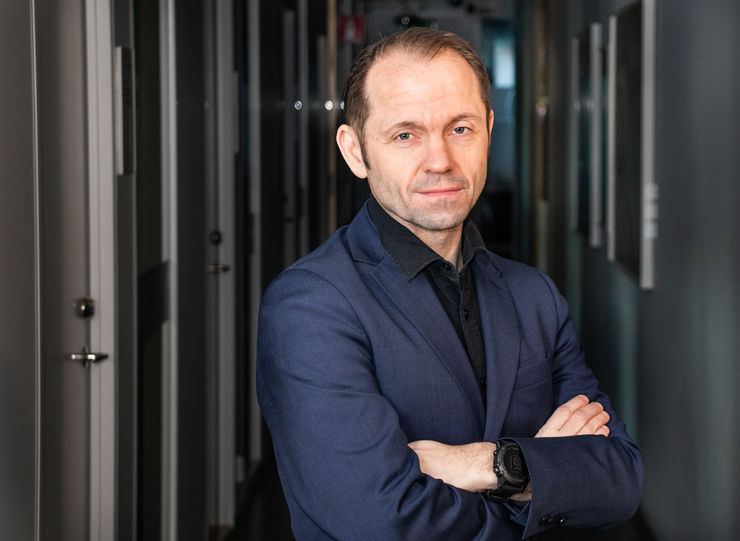 Gissur Erlingsson’s research into the risk of corruption in welfare states is a good example of CKS’s research impact, both in the media and in the public sector. In recent years, Sweden has seen several corruption scandals in local government, which makes it even more important to better understand and analyse the preconditions for impartiality and the rule of law in the municipal sector. Gissur Erlingsson is one of the pioneers in the study of Swedish domestic corruption. His results show that public anti-corruption efforts have not been taken seriously enough in Sweden, especially at the municipal level. Erlingsson and his colleagues have also found that Sweden stands out internationally; the citizens feel that corruption is worse at the local level than nationally. Also, they are less trusting of municipal politicians and municipal institutions than their equivalents at the national level.

Johan Mörck, special adviser at the Ministry of Finance, is preparing a national action plan against corruption.

“Gissur Erlingsson and his colleagues systematically gather knowledge about corruption and its prevention in Sweden. He writes articles aimed at the general public, and works close to the practitioners. All of CKS does this, which is very valuable”, says Johan Mörck.

Gissur Erlingsson also conducts research on municipal autonomy and how the municipal structure should be arranged, in order to address future challenges. Thus his research concerns issues relating to democracy and local politics, and it has had national impact in the debates in conjunction with the Kommunutredningen (Municipal Enquiry) (SOU 2020:8). His research questions also include the difficulty of political parties in attracting party members, and the conditions by which elected representatives can fulfil their duties. He regularly appears in local and national media, writing columns and taking part in debates, and is one of the founders of the highly regarded group blog Politologerna (“The Politicologists”). 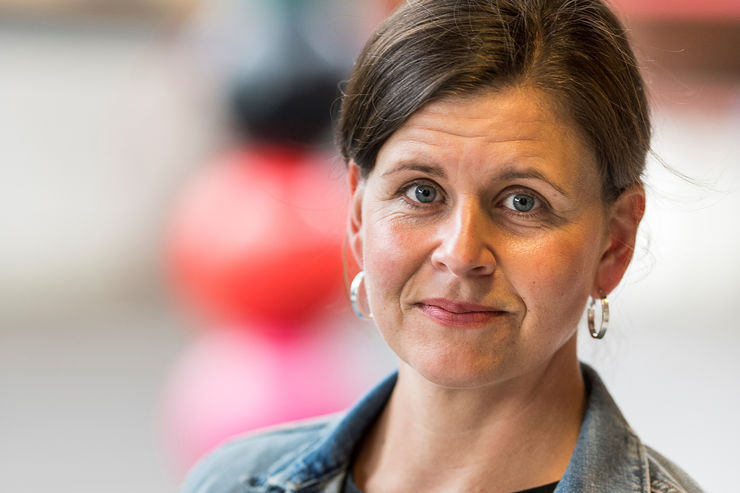 Another excellent example of relevance to society is Josefina Syssner’s research on municipalities with decreasing populations. The results show that in the long term it can be appropriate that they lower their ambition of reversing this trend, and instead focus on a population decrease that is smart, strategic and sustainable. Close to half of Sweden’s 290 municipalities have fewer residents than in 1974, and most have no strategy for dealing with this trend. Josefina Syssner has brought this issue onto the political agenda in many municipalities, and has helped the municipal sector to learn that shrinking municipalities can deal with their challenges more effectively. An example of this is “Nätverket för krympande kommuner” (the Network for Shrinking Communities), a collaboration between CKS, Arena för tillväxt (Arena for Growth), Sveriges Kommuner och Regioner (the Swedish Association of Local Authorities and Regions) and study circles in individual municipalities. 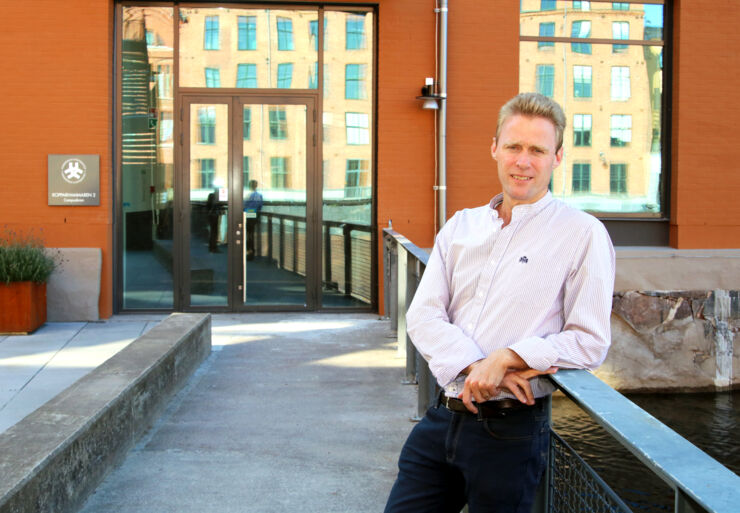 Johan Wänström. Foto Anna ValentinssonOne further example of national impact is Johan Wänström’s research on unconventional coalitions in those municipalities where Moderates and Social Democrats have formed majority governments. This research has taught us more about what it is that facilitates or obstructs the emergence of such coalitions, and how well they have worked in practice. Wänström’s studies have had considerable media impact and he is often invited to speak about them.

Research results that have contributed to the significance

CKS has developed a method that is based on interaction with the surrounding community throughout the research process. Already at the early stage, when identifying knowledge gaps and research questions, researchers and representatives for municipalities and regions maintain a close dialogue. And this contact continues, through data collection, the analysis phase, conclusions and the dissemination of results. This interaction helps ensure that the research is socially relevant and beneficial. Because of this method, CKS is sometimes called “The Academy of the Municipalities”.

The collaboration between researchers and municipalities has also helped establish contact networks for municipal research across the country, at all political levels. Contacts have also been established with other organisations that work with municipal and regional challenges. This builds a foundation, so that the research benefits can be disseminated by social actors who work with strategic governance and planning. 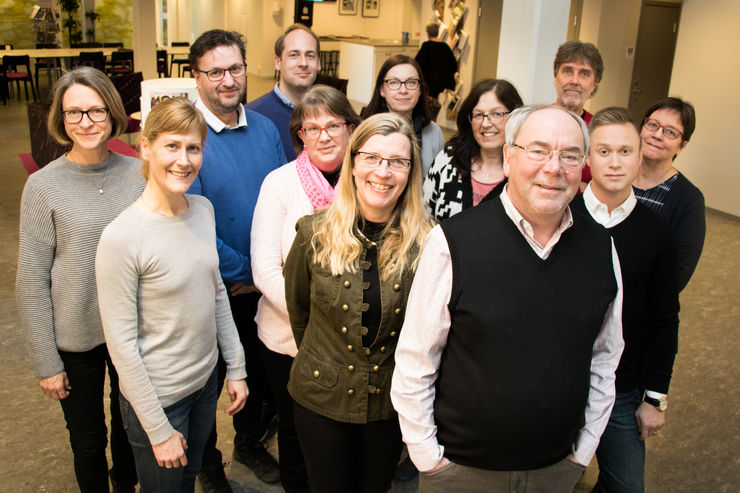 Anders Hedeborg together with most of the members of the CKS board. Foto Anna Valentinsson

Anders Hedeborg is councillor in the town of Vadstena, and chair of the CKS board.

“CKS is an example of an excellent collaboration between academia and society. Municipalities and researchers have recurrent dialogues, which leads to relevant research, professional development and new knowledge in the municipalities”, explains Anders Hedeborg.

There is much interest in CKS’s research; the centre’s researchers disseminate it by way of recurrent meetings with actors at all political levels – nationally, regionally and locally. CKS’s research results have frequently contributed valuable knowledge and guidance, as the municipalities and regions develop new strategies, policies and work methods.

Clear evidence that CKS’s research is considered relevant and important is that its coworkers are regularly engaged in collaborative projects together with major social actors such as Arena för tillväxt (Arena for Growth), Tillväxtverket (Swedish Agency for Economic and Regional Growth), Tillväxtanalys (Swedish Agency for Growth Policy Analysis), Studieförbundet Näringsliv (Centre for Business and Policy Studies) and Sveriges Kommuner och Regioner (the Swedish Association of Local Authorities and Regions). CKS coworkers are frequently invited to speak at large events, and have been engaged as advisers in projects led by Statskontoret (The Swedish Agency for Public Management) and Riksrevisionen (Swedish National Audit Office), as well as governmental enquiries such as Landsbygdskommittén (Rural Affairs Committee), Tillitsdelegationen (Trust Delegation), Kommunutredningen (Municipal Enquiry) and Långtidsutredningen (Long-term Enquiry).

Further, CKS publishes research results in various channels, including its own report series which is widely distributed to politicians, civil servants and the public.

CKS has continual contact with the media, enabling it to raise important questions for a broad target group, not only in the region but also nationally and internationally. This is done in two ways. Firstly, the coworkers actively disseminate their research in blogs, columns, debate pieces and popular-science essays, and secondly by being available for the media, in order to comment on political developments and processes. A good example of the interest in our coworkers is that Johan Wänström, Richard Öhrvall and Gissur Erlingsson have been engaged in both regional and national election night coverage. Another example is Josefina Syssner’s recurrent appearances on Swedish television, where she comments on news reports about the problem of rural depopulation.

By way of their collective expertise, CKS coworkers are regularly involved in the production of course literature for broad target groups. One course book that has received considerable attention in Sweden is Politik och förvaltning i svenska kommuner [Politics and governance in Swedish municipalities] (Erlingsson & Wänström, 2015); it won publisher Studentlitteratur’s award for course literature, with the citation: “For an important textbook that, in an inspiring and comprehensible way, gives the reader fundamental understanding of Swedish municipalities”. Another example where CKS coworkers have had impact is the textbook Den svenska politiken [Swedish Politics] (Bäck, Erlingsson, Larsson 2015), which has been used in many undergraduate political science programmes. 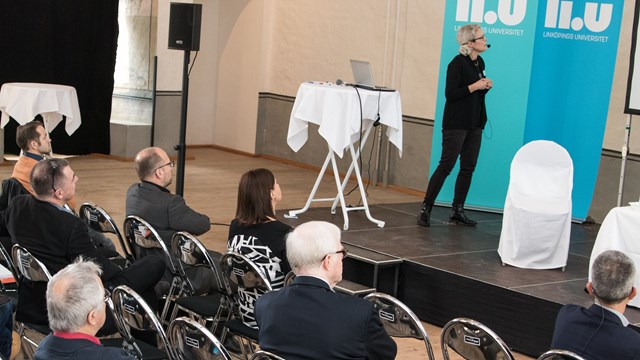 CKS (Centre for Local Government Studies) is a research centre for studies on local politics, organization and development.