My interest in dosimetry led to EPR analysis for counting the number of radiation induced free radicals which is directly proportional to the absorbed dose. We have chosen lithium formate for dosimeters for radiation therapy. These EPR dosimeters have successfully verified dose plans at IMRT, mapped dose distributions around brachy sources and have been used for audit. For retrospective dose determinations of emergency irradiations we have analyzed both body materials and things found in the pockets of victims.

Dosimetry based on EPR spectrometry is since many years a well-established method mainly with the dosimeter material crystalline alanine. Alanine has very good dosimetric properties but is a little too insensitive for use in radiation therapy. During the last 15 years we have developed a number of promising dosimeter materials and after careful testing lithium formate has shown to be the most suitable one.

We have used lithium formate dosimeters for verification of calculated dose distributions both in external and brachy therapy and for testing the whole treatment procedure between different clinics in an audit. To improve the spatial resolution in dose mapping we succeeded to decrease the size of the dosimeters keeping the high accuracy by using a modern spectrometer equipped with a super high Q resonator. 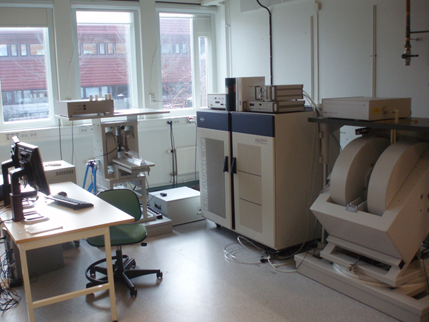 Recently the proton therapy center started in Sweden and we will examine the properties of lithium formate regarding stability and response in a proton beam.

When placed in a strong magnetic gradient field, visualization of the radical distribution in a sample is possible. Compared to MRI the development has been quite slow because of low radical concentrations compared to hydrogen nuclei available for MRI. The short relaxation times for the electrons also demand extremely strong magnetic field gradients.
High resolution visualization of dose distributions requires for the material a high radical yield and a spectrum with a single narrow signal. The width of the EPR signal determines the possible spatial resolution for dose distributions. We have visualized a homogenously irradiated potassium dithionate tablet in different positions in the cavity of the EPR spectrometer equipped with gradients, 1.7 T/m and achieved a resolution of 0.3 mm without further deconvolution. An in-house MATLAB code has been used for reconstruction of the EPR images taking the inhomogeneous sensitivity in the cavity into account and possibilities for base-line restoration. The aim of this investigation is to visualize the dose distribution of a 2x2 cm2 radiation field including the penumbra region by using a stack of 5 mm dosimeters.

In collaboration with professor S Schlick in Detroit we have mapped the dose distribution in tablets of potassium dithionate irradiated with N7+ or C6+ -ions and as far as we know for the first time with EPRI visualized the dose and the LET distributions with a high spatial resolution in the order of 5 μm.

We conduct research in medical radiology and visualisation, radiation physics, radiochemistry and radioecology.