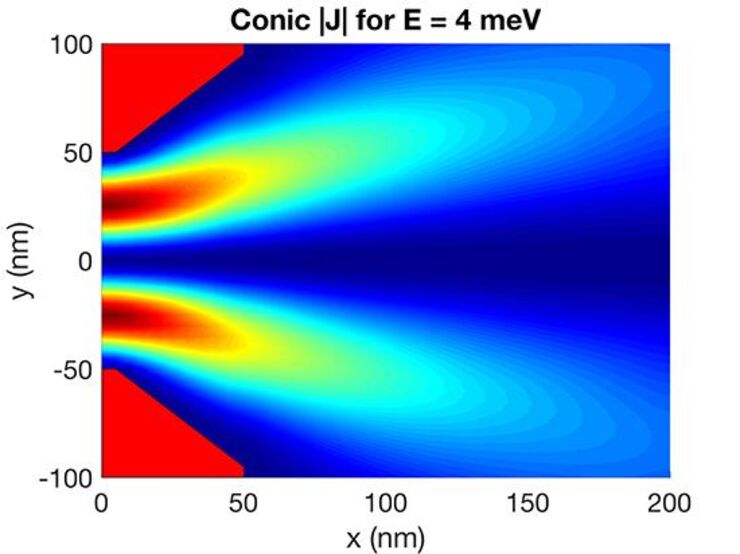 Probability current density of an electron propagating through the wire with conic opening into two-dimensional electron reservoir with the energy of incoming electron of 4 meV.
https://advanceseng.com/injection-spinning-electrons-quantum-wires-2d-electron-reservoirs/

In mesoscopic physics, ballistic conduction is defined as the transport of electrons in a medium, having negligible electrical resistivity caused by scattering. Specifically, mesoscopic systems based on GaAs/AlGaAs heterostructures have been reported to allow the rich physics of ballistic electron transport. A favorite system for studying ballistic electrons is the high mobility two-dimensional electron gas (2DEG) which resides at the interface between GaAs and AlGaAs layered semiconductors. By proper gating on top of the heterostructure, one can create confined low-dimensional systems like quantum wires (QWs) and quantum point contacts (QPCs). It is possible to control the flow of electrons by applying electric and magnetic fields. At low temperature and small electric bias, only the electrons near the Fermi energy contribute to the current. It has been shown that, under certain conditions, the propagation of ballistic electrons in semiconductor quantum wires, of electromagnetic waves in wave guides, of sound waves in pipes with different geometry, light propagation in optical fibers for photonic applications are all described by the same type of Helmholtz equation. All the same, the precise control of spin states and spin dependent electron transport is required for applications in spintronics and quantum information processing.

Presently, the technique of transverse electron focusing has been proposed to study electron transmission through a QPC by means of investigation of the position, the shape and the height of the focusing peaks. Nonetheless, further research on the spin-splitting effect when a transverse magnetic field is applied in the 2D region is necessitated. To this end, a team of researchers from the Department of Physics, Chemistry and Biology at Linköping University in Sweden: Ivan Yakimenko, Irina Yakimenko and Karl-Fredrik Berggren designed a model illustrated in the figure for electron flow from a quantum wire into a 2D region through an opening having different geometries. Their work is currently published in Journal of Physics: Condensed Matter.

To begin with, the researchers studied the transport of electrons into the 2D reservoir from a quantum wire having a rectangular opening without a magnetic field using the proposed mode-matching on a grid method. They then studied the conic and rounded openings which are more typical in real semiconductor structures. Lastly, the spin-splitting effect in an applied transverse magnetic field in the 2D region was investigated.

For the examined cases, the team reported that the geometry of the opening did not play a crucial role for the electron propagation. In fact, it was seen that when a perpendicular magnetic field was applied, the electron paths in the 2D reservoir were curved. These observations were further analyzed both classically and quantum-mechanically. Consequently, it was established that the effect was clearly present for realistic choices of device parameters and consistent with observations.

In summary, the study presented the numerical cross-examination of electron transport from the injector wire into the open two-dimensional reservoir with and without magnetic field. Remarkably, the study demonstrated the development of the novel mode-matching technique and further studied electron flow through the coupled wire with rectangular, conic and rounded openings. In an interview with Advances in Engineering, Professor Karl-Fredrik Berggren further affirmed that the results of their study may be applied in designing magnetic focusing devices and spin separation.

The research in our unit deals with materials physics, quantum physics, non-linear optics and quantum chemistry.