Back in the early 1900s, Danish physicist Niels Bohr had realised that entirely different rules prevailed in the world of the atoms than in the classical physical world we see around us. He formulated a quantum mechanical model of the hydrogen atom in 1913, while Einstein contributed a quantum mechanical model of light back in 1905 – what we today call photons. They had entirely different opinions on how the theory should work, however. The debate reached its peak in 1935, when Einstein pointed out that entangled – or intertwined – pairs of quantum mechanical particles seem to influence each other at a great distance, and dismissed this as ‘spooky action at a distance’.

Not just a theory any longer

Until very recently, this had been a theory. But now a large research group with participants from several European universities, led by Professor Anton Zeilinger at the University of Vienna, has shown that spooky action at a distance seems to exist – and to work. LiU professor Jan-Åke Larsson is part of the research group that has now, once and for all, proven that the entangled pairs of quantum mechanics exist in nature.

They used a test – an inequality formulated by physicist John Bell in 1965. The inequality functions as a limit for how great the correlation between two systems can be if action at a distance does not exist. The laws of quantum mechanics predict that ‘entangled’ particles have greater correlation than that, an effect that the research group’s experiment has now demonstrated in nature. It seems, namely, as if a measurement of the polarisation on one photon in an entangled pair makes the other photon immediately assume the opposite polarisation. 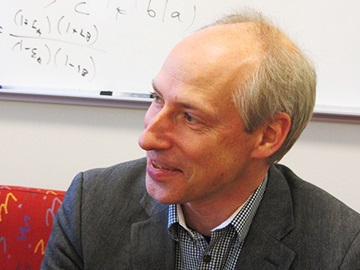 Foto: Monica Westman“How can the one photon know we’re measuring the other, and what polarisation it has just then?” Professor Larsson asks, rhetorically.

He took part in the experiments performed at the University of Vienna, in a cellar under Hofburg, and he is also one of the co-authors of a scientific article – published on the arXiv.org open platform – that has attracted much attention; it will soon also be published in the esteemed journal Physical Review Letters.

For 50 years, physicists around the world have competed to be the first to prove the existence of entangled pairs. A research group in Delft attracted great attention for an initial experiment that was published this summer.

But Professor Larsson and his colleagues have now succeeded in developing an experiment set-up in which the proof is incontrovertible. Among other things, they were able to detect so many photons that the selection was representative. The settings were random, and so quick that no information could have been transferred from one end of the experiment to the other. The measurement processes for the entangled photons could thereby have been separated spatially from each other.

“This is the experiment of the century, which really proves that quantum mechanical theories are the only alternative,” Professor Larsson says.

Purely practically, researchers around the world are now trying to profit by the quantum physical properties, for example in order to create completely secure data transfer through quantum encryption, or to build quantum computers with many times greater calculation capacity compared with today’s leading supercomputers.

Jan-Åke Larsson is a professor of information coding in the Department of Electrical Engineering at LiU.