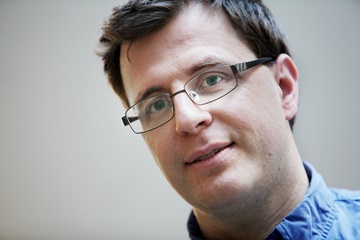 Photo credit: Ida Ling FlanaganEach of the five prizewinners will receive SEK 4.5 million in research grants allocated over three years, as well as a personal prize of SEK 250,000.

According to the statement from the Royal Swedish Academy of Sciences, Professor Crispin has conducted outstanding research in “development and studies of organic thermoelectric materials with potential application for conversion of thermal energy into electric.”

The Göran Gustafsson Prize is the latest in a series of honors for Professor Crispin. In 2011, he was awarded the Tage Erlander Prize for his discovery that conductive polymers can be used as thermoelectric material. He has a ‘starting grant’ from the European Research Council. Since 2014, he has been a professor at the Organic Electronics Laboratory at LiU Norrköping. His research is focused on the use of conductive polymers as energy material.

The prize has been awarded annually since 1991 in the fields of mathematics, physics, chemistry, molecular biology, and medicine by the Göran Gustafsson Foundation for research in the natural sciences and medicine. The prize nominations come from the country’s universities and colleges, and are prepared by the Royal Swedish Academy of Sciences, which also presents the prizes. The foundation manages a capital of approximately one billion SEK.