How are animals in food production affected by stressful experiences early in life? Per Jensen wants to find out whether it is possible to see the traces of stress much later. He has been awarded SEK 8 million by Formas, the Swedish research council for sustainable development, to study the stress reactions of chickens in detail. 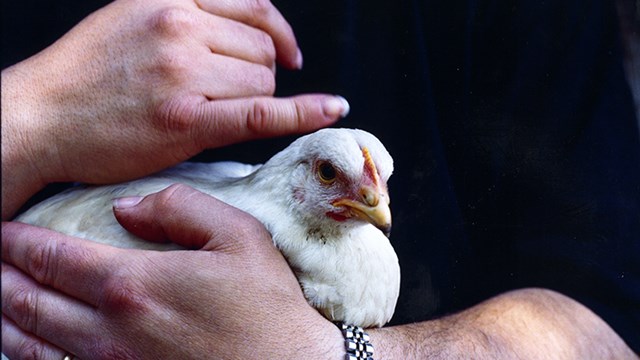 Photo credit: Vibeke MathiesenWhen Formas recently distributed research grants in the field of animal protection and welfare, a LiU research group led by Per Jensen received just over SEK 5.3 million. The project will attempt to map how chickens are influenced by experiences early in life. During their first few days of life, chickens in the commercial production system go through many events that may be stressful, such as transport from the hatchery to the rearing site.

The research group plans to examine the long-term effects of stress early in life. They are particularly interested in how stress can give rise to what are known as ‘epigenetic’ changes, which are modifications of the genetic material that control how genes are translated into protein. In contrast to the actual genes, epigenetic modifications undergo continuous change, and are influenced by stress and many other environmental factors. The researchers will study epigenetic modifications in blood. 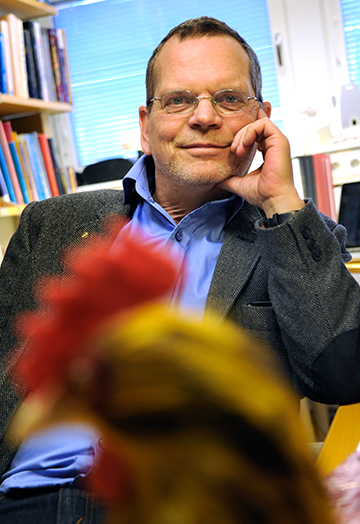 Photo credit: Göran Billeson“If the project is successful, the results may be useful to evaluate an animal’s life history. We envisage that it will be possible to take a blood sample from a chicken in a reared batch and determine which genes have undergone epigenetic modification. This would tell us what the animal has experienced early in life. This is our vision: we’ll have to see what is possible in reality,” says Per Jensen, professor of biology at the Department of Physics, Chemistry and Biology.

The researchers are examining chickens, but they believe that the issue of how animals react to stressful experiences early in life is relevant for other agricultural animals.
“If we can find a way of measuring this in chickens, we hope that we will be able to apply similar methods for other animals,” says Per Jensen.

Stress at the gene level

Per Jensen was also successful, to the tune of nearly SEK 3 million, in Formas’ more general round of research and development funding.

“This project deals with what we call ‘genetic architecture’. We are trying to identify the genes that control variations in chickens’ stress response,” says Per Jensen.

The tame chickens used in food production have developed from wild junglefowl, which are in general more susceptible to stress than their domesticated cousins. The AVIAN research group at LiU is one of few that has its own population of red junglefowl available for study. Researchers in the new project will study a group of chickens that have been bred in a special way. The researchers have selected from a group of junglefowl the individuals that are least afraid of humans. These individuals have then been used in breeding. The selection process has been repeated through several generations.

“It’s a form of simulated domestication. With each new generation, the fowl resemble tame chickens increasingly closely with respect to several properties. One of these is their response to stress,” says Per Jensen.

In their search for genes that are important for the stress response, researchers have previously studied a hybrid between tame chickens and junglefowl. They have found several genetic regions that are candidates for more detailed study. They are now preparing to compare the hybrid birds with the junglefowl that have gone through the domestication process described above.

“We want to see which genes are present in both of these populations. These will be prime suspects for genes that control the stress response,” says Per Jensen.