Two hundred years ago, thermodynamics was applied to increase the efficiency of steam engines. Now, the research is scaled down to the molecular level, with the objective of developing materials for gas storage, nanosensors, molecular machines and thermal insulators.

A research team at Linköping University and Technische Universität München (TUM) has managed to follow and model the motion of a single molecule, trapped in a nanoscale pore. By fine-tuning the temperature and shift the molecular charge the researchers have, among other things, been able to encode letters of the alphabet, demonstrating the possibility of encoding the equilibrium behaviour of single molecules. The work is now being published in the journal Nature Communications.

The theoretical calculations have been performed at the National Supercomputer Centre (NSC) in Linköping, coordinated by Jonas Björk, postdoc in theoretical chemistry at Linköping University.

Molecular thermodynamics considers properties of molecules over time, such as their position and movement. In the macroscopic, three-dimensional world, molecules adopt an almost endless variety of shapes, making it a huge challenge to analyse individual states. But the experimental team in Munich has created thin two-dimensional networks of pores on a silver surface, where the motion of single molecules can be observed in the scanning tunneling microscope at different temperatures.

With this technology, developed under the direction of Florian Klappenberger and Johannes Barth, it is possible to examine the thermodynamic equilibrium at the atomic level, over desired temperature ranges.

"It was extremely interesting to observe, both with a microscope and a computational model, how a given molecule still occupies millions of different positions in a very tiny space," says Carlos-Andres Palma, lead author of the study.

In parallel with the experiments, the researchers worked with sophisticated computer models to describe the temperature dependence of the dynamics of single trapped molecules.

"We have applied state-of-the-art supercomputer calculations to understand the interactions and energy landscape determining the motion of the molecules. But it's a long way to go before the thermodynamics of individual molecules can be transformed into technology," says Jonas Björk.

Image: By changing the temperature of a single molecule trapped in a nanopore, researchers simulated the three letters in the abbreviation LiU. Illustration: C.-A. Palma / TUM. 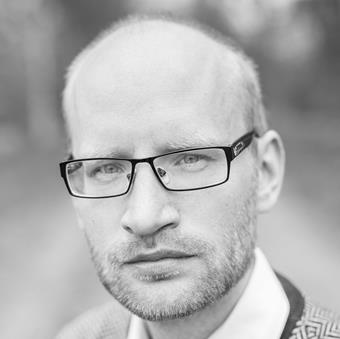