2016 Environmental Engineering Profile of the Year. Winner of the 2015 Skapa prize in Östergötland. And winner of the 2016 Nordic Cleantech Open. As if that weren’t enough, Againity was also given a desirable spot on the ‘33 List’ – the list of the 33 hottest new technology companies in Sweden. 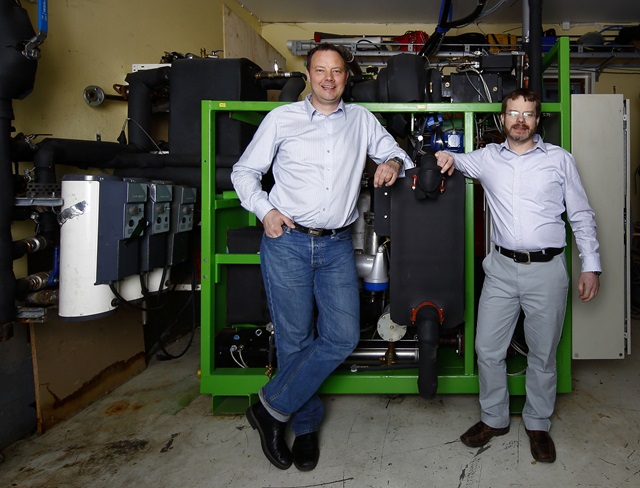 “We’ve worked hard for this, and all this attention and appreciation is really fun,” Dr Wren says.

But he’s also careful not to claim any victories in advance.

“I’ve started companies previously, and we won the Venture Cup in 2004. After a few years we had to sell the company for a symbolic sum and now it’s been shut down,” he tells us.

That was, however, nothing that prevented him from starting companies anew when the right occasion turned up.

“You learn a lot from starting and running companies. Regarding my involvement in Againity, it has been a boost both for my education and my research,” he says.


Againity was started by Mr Frykerås and Dr Wren approximately three years ago. Mr Frykerås had the basic idea, but needed a partner with a little more theoretical skill. LiU Professor Olof Hjelm brought them together and an immediate friendship was formed. Today, the company also consists of two former LiU students - Elin Ledskog, engineer in industrial economics with a specialisation in energy engineering, and newly-graduated mechanical engineer Gustav Ganslandt. 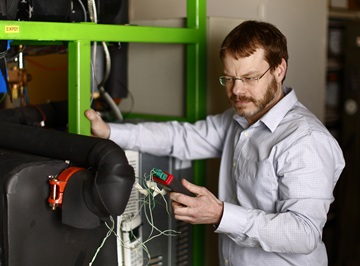 Foto: Peter Holgersson“Elin did her bachelor’s project for Againity, and Gustav did his degree project; it’s perfect that we can employ capable people coming directly from the university,” he says.

But since Againity’s product is directly linked to Dr Wren’s area of research, he is not the one who supervises or examines the students who do their degree projects for the company.

“I have to stay away from that,” he says.


The product Againity has won so many prizes for is a patent-pending turbine solution that transforms heat – waste heat from industry, for example – into electricity. It makes use of Organic Rankine Cycle (ORC) technology, and their machine works in somewhat the same manner as a steam power station, except without water. Instead, it is hydrocarbons that are by turns vaporised and condensed using heat. The steam then expands in a turbine, which in turn drives an electricity-producing generator.

“The machine is scalable – constructed of modules – and can work over a large power range. It can be built in a standard container that is delivered directly to the site where it’s needed, and that makes it tremendously simple to install,” he tells us.

The smallest machine is only a few meters tall; the largest requires an entire 40-foot container. Machines in series handle heating power from 200 kW up to 15 MW.

The intended customers are, for example, thermal power stations – preferably those that burn biofuel. The turbine makes electricity out of 10 percent of the heat, and the rest is sent further, for example to district heating networks. Another application is making electricity out of landfill gas or biogas from sewage treatment plants.


There is also a large market in Africa and Againity has great hopes of getting a larger order from Kenya, even if all the paperwork isn’t quite ready yet.

“Our machine then works in combination with heating boilers for trash and biogas scrubbers. We’re sending off a miniature Gärstad waste management centre. They take charge of trash and burn it, obtain electricity, and then sell the heat left over to a nearby hospital and a dairy.”

The electricity will also be cheap.

“Regarding landfill gases, we have a repayment period of one year, and for thermal power stations it’s around maybe three years. This means that just getting things going is no longer the least expensive option. But naturally a little involvement is also needed,” Mr Wren says.

Their strategy is to build up a position on the Swedish market, but despite everything the large markets are in Africa, Asia, and South America.

“Even if it’s warm there, they have a large – and growing – need for electricity. Currently, it’s completely dependent on expensive, dirty fossil fuel-burning electricity production.”