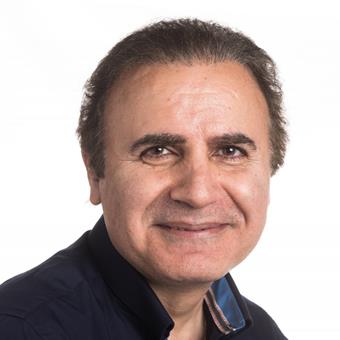 A researcher in printing and image reproduction and an experienced supervisor.

After his Licentiate defense, he moved to the Department of Science and Technology, Linköping University, where he later received his PhD degree in Media Technology in 2001. His PhD study was mostly focused on digital halftoning, and in his PhD thesis, titled High Quality Frequency Modulated Halftoning, he proposed a number of novel halftoning algorithms to improve the print quality.

One of the main contributions of his PhD study was the development of a color halftoning method that halftoned a color image by halftoning its color separations in a dependent manner. By doing that, it was shown that not only the print quality was improved, but also the ink consumption was reduced.

Between 2009 and 2017, he has been the main supervisor of four PhD students who successfully defended their PhD theses in different areas of graphic technology and color image reproduction.

Since 2001, Sasan Gooran has been responsible for and involved in different undergraduate courses in Graphic arts, Computer graphics, Numerical methods, Calculus and Linear algebra. His current courses include Graphic arts, Computer graphics, Image reproduction and image quality, Prepress and printing technology, Foundation course in mathematics and Applied transform theory. He has also been the examiner/supervisor of more than 50 M.Sc. theses.