For the first time since 2013, Malmstens Linköping University is exhibiting at Milan Design Week. In an old monastery in the city centre, ten new pieces highlight the students’ design and craft skills. 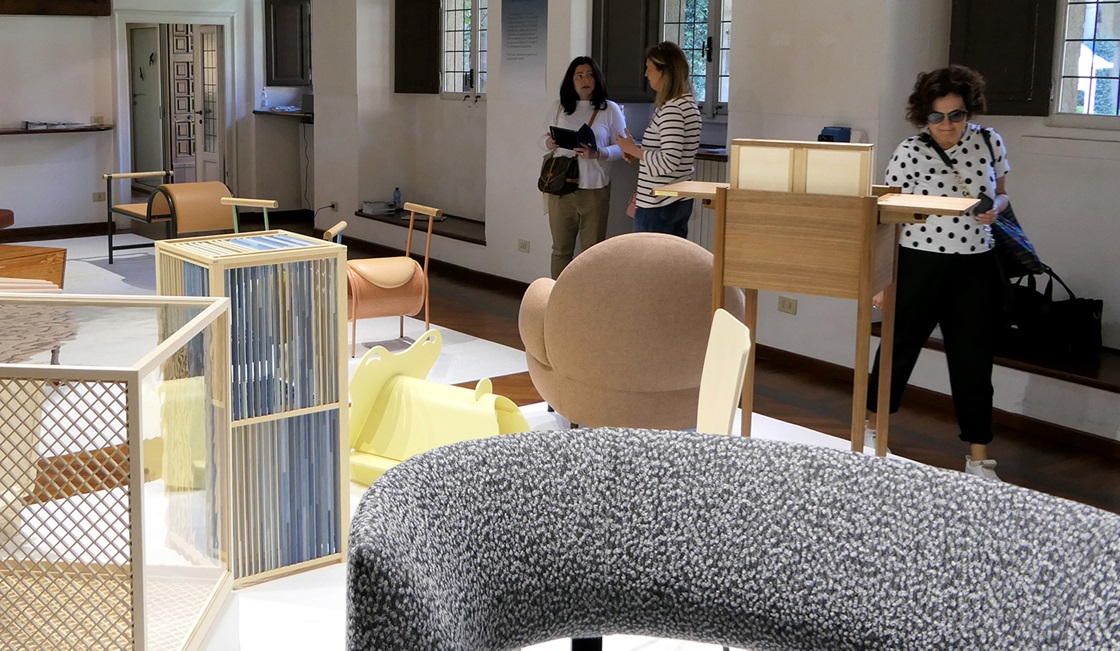 Soft jazz meanders through the open windows of the exhibition hall, out to the narrow street. Visitors move around, quietly discussing the pieces. In the green courtyard of the 16th-century monastery, refreshments are served at a bar designed by students from Konstfack, a design school in Stockholm. The rugs laid out on the lawn make it the perfect place to mingle. This is the stage for Malmstens’ presence at Milan Design Week 2018.

This event, and the enormous fair that is underway at the same time, are not to be missed if you want to keep up with the latest trends in the design world. Hundreds of thousands of visitors from all over the world flock here, to be inspired, to mingle and to network. And this makes it an excellent place for Malmstens Linköping University to get exposure.

Malmstens normally sends a representative to the annual fair; this is the first time since 2013 that Malmstens exhibits. Together with Konstfack and It is Media, who publishes the design magazine Rum, they are sharing a space in Chiostro Delle Umiliate, an old monastery in central Milan.

Malmstens has some ten students and four staff members in Milan. A proud department head Ulf Brunne presents the ten pieces on the podium. They were made by students in their final year, and are exquisite in their craftsmanship.

”This time we wanted to show fresh, new work. These are from the past six months.”

Most of the pieces were made by pairs of students from two different programmes. Several were also journeyman’s pieces.

”We’re probably the only university in the world to offer students the option of doing a journeyman’s piece.”

Looking to the east and the west

During his days in Milan, Ulf Brunne had meetings with reps from design schools in Chile and China. Malmstens is now looking to both the east and the west. He has just returned from Cuba, where he hopes to sign an agreement with an art and design school. To the east, it is mainly about Japan, and in recent years, China.

”In Japan they’re extremely skilled, especially in furniture-making. We’ve had many exchange students from there over the years. China is a new track. There we had a large collaboration just last year, together with Swedish Wood, called “Design in Pine”, which has led to spin-offs.”

What motivates him to piece together these long-distance collaborations?

“The main benefit is the exchange students who come to Malmstens, they’re like energy injections for the whole school; they have a positive influence on our students. Our express goal is to increase the number of exchange students to six in the spring of 2019. For some time we have only had two, and that isn’t enough to build on. We need to increase that number.”

Carl Malmsten is not a well-known name in international design circles. This means Ulf Brunne doesn’t feel he has to travel around, representing Carl Malmsten’s own ideals.

“No, not at all. That’s why we recently removed ’Carl’ from our name, so we aren’t too tightly associated with him. But ’Malmsten’ we have to keep. It stands for other qualities we’re very proud of, such as quality craftsmanship.”

Slideshow from the exhibition

Malmstens Linköping University provides training in furniture design, cabinetmaking, and upholstery. We are part of the Department of Management and Engineering.