In this project, we address questions relating to both the mechanisms and the relevance of the CT (unmyelinated tactile) afferent system.

We will determine the basis for CT’s unique velocity preference and reveal ion channels critical for human CT signaling. These studies are important for understanding basic somatosensory mechanotransduction mechanisms, and they are central for the ongoing development of CT-derived analgesic drugs based on transgenic mice models.
Affective responses are ultimately shaped in the brain, but it has never been studied to what degree the peripheral CT signals can decode the basic affective properties of the stimulus. We aim to test the hypothesis that CT afferents have a similar acuity as Aβ fibers in representing stimulus properties, but in the affective domain. This would suggest that the CT afferents inform the emotional response at a surprisingly fine-grained level. In doing so we will use ecologically valid naturalistic touch which is a novel approach in this field. If CT afferents can handle the bulk of human-to-human affective touch coding it would suggest that these unmyelinated fibers have an important role in shaping our social world. 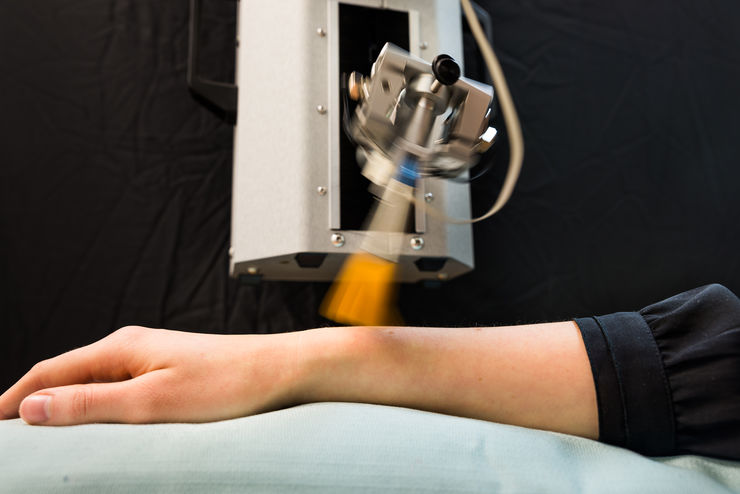 This project builds on our recent discovery of a hitherto unknown ultra-fast system for signaling mechanical pain in humans. 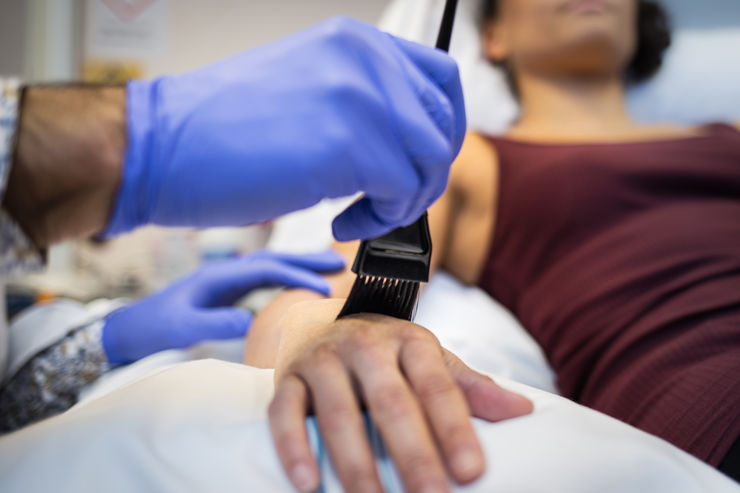 Pain receptors in the skin are activated by coarse brush strokes and pinching. Photo credit Charlotte Perhammar
These nociceptors have similar conduction velocity as touch receptors and are abbreviated as UFNs (ultra-fast nociceptors). The overall aim is to characterize the functional and anatomical properties of the UFN system. For human myelinated nociceptors, we will identify the end-organ structures and characterize the mechanotransduction mechanisms.

We will also establish if UFN neurons project alongside the slower (Aδ and C) pain pathways or the faster (Aβ) touch/proprioceptive pathways. In healthy subjects, we will identify cortical projection areas using fMRI. In patients, we will study the consequences of discrete lesions of the spinal cord on behavioral, affective, and fMRI responses to UFN-targeted stimulations. We will also study the contribution of UFN signaling to motor control by measuring the human nociceptive withdrawal reflexes during anesthetic block of thinly myelinated and unmyelinated peripheral neurons.

Experiencing the self through touch

In this project, we study the neural mechanisms of the bodily self-perception and its dysfunctions. 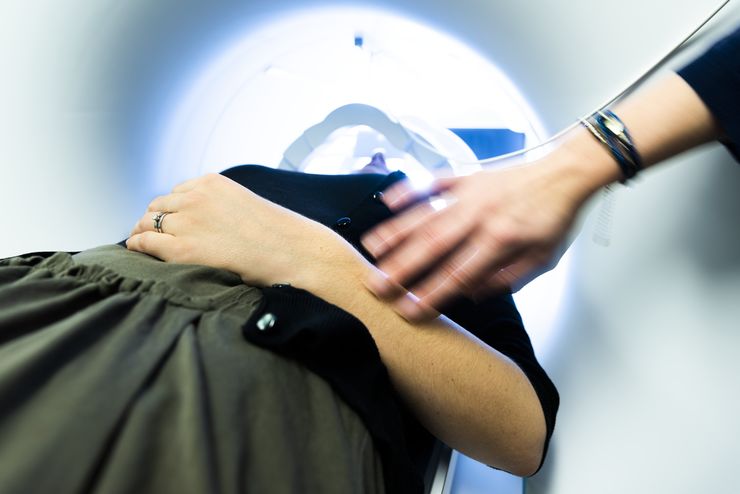 Somatosensation and interoception are necessary for the establishment of the bodily self. To develop a functional bodily self, humans need to identify the boundaries of their body and differentiate ”self” from “others”. Disturbed tactile self-other-distinction might affect the establishment of the bodily self, and even of the higher-order self. Such dysfunctional self-processes constitute a core symptom in many psychiatric disorders, e.g. in schizophrenia.

A view into the Olausson Lab

Images of members of our research group at the Olausson Lab when we are in the process of conducting studies.