Healing of bone and tendon

The purpose of this research is to ensure and accelerate the healing of injured bones and tendons.The project involves clinical research that builds on our previous experimental work, mainly regarding PTH and bisphosphonates. In the meantime, our experimental work has moved on, and now aims at a deeper understanding of the healing of injured bone and tendon (the latter representative of all soft collagen type-I tissues) in the hope that also this will lead to clinical applications in the future.

Survey of the field 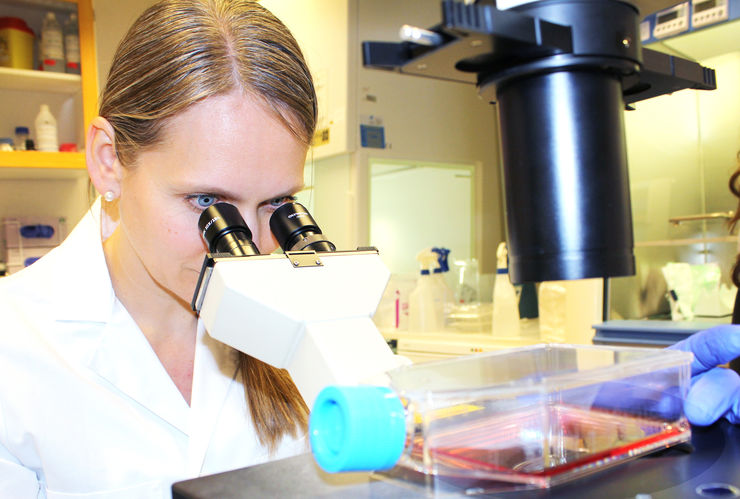 Photo: Ulrik Svedin.The initial phases of the healing of injured tendons and bone appear similar, and are virtually unexplored. Both tissues need to recognize that they are injured, something which probably occurs through the innate immune system recognizing damage-associated molecular patterns.
The initial inflammation might be unspecific and destructive, but at some stage the process switches over to a reparative response. The mechanisms behind this switch are unknown. Mechanical signaling, i.e. tissue deformation, has profound effects on bone and tendon healing. Up till now, it has been thought that these effects only influence the later phases, signified by tissue remodeling.

However, recent tendon data from our lab show that deformation has equally profound effects on the inflammatory response, leading to changes in gene expression with positive effects on the strength of the healing tissue. Tissue deformation due to mechanical loading, therefore, appears to be one of the signals that make the inflammatory response acquire a reparative role.

This is of clinical importance, because clinical textbooks generally recommend load protection during the inflammatory phase, which for most injuries lasts about a week. It may be that these recommendations need to be changed.

The underlying reason is methodological difficulties, with a lack of animal models. We have created a robust model for metaphyseal healing, by regarding the fixation of an inserted screw in cancellous bone as the result of repair after trauma. The healing response is measured by pull-out force and morphology. We have identified fundamental differences in the response to drugs that influence inflammation.

Healing of injured tendons and bone can be stimulated by pharmacological treatment. This is a fairly new insight, which is just about to reach the clinic. Our group pioneered this field, both experimentally and clinically, with the first clinical trial ever showing accelerated fracture healing by drug treatment, as well as the first human trial showing improved implant fixation by a drug coating.

So far, the drugs used have aimed at the later phases of healing, e.g. by stimulating osteoblast formation. Drugs can also impair healing of both tendon and bone. NSAIDs are well known inhibitors of healing. However, they can also have a positive effect, if they are given at a delayed time point. Strikingly, this time point appears to coincide with the switch from destructive to reparative inflammation, and moreover, NSAIDs interfere with the ability to respond to tissue deformation (mechanotransduction).

Bisphosphonates have a potential role

Bisphosphonates are common drugs, used against osteoporosis. Because they target bone resorbing cells, they have a potential role in fracture repair and implant fixation. It was previously thought that they would be useless for orthopedic applications, because of the coupling between osteoclasts and osteoblasts, and we were the first to recognize that this coupling is of little importance in early reparative processes. However, our reports came too early, before people were prepared to accept them.

Following years of experimental work, we have shown in clinical trials that bisphosphonates are beneficial for bone implant fixation and bone graft incorporation.

Again, the first publications came too early to reach a prepared audience, but confirming studies have been published by others recentlyBisphosphonates also have skeletal side effects, such as bisphosphonate-associated fatigue fractures (“atypical femur fractures”) and so called osteonecrosis of the jaw.

The pathophysiology of both these conditions has been misunderstood in the literature, due to rather simple misconceptions, and we are currently working to clarify the basic mechanisms.

Fatigue or stress fractures in athletes heal extremely poorly for unknown reasons. Biopsies from bisphosphonate-associated fatigue fractures show a fracture gap width of approximately 0.1 mm. I propose that the healing problems are due to a “grinding effect”, destroying any cell that tries to enter this very thin gap and initiate healing. If the grinding theory is correct, new methods will enable simple and efficacious treatments that induce fast healing.

We continue our studies on mechanical regulation of tendon healing. A single loading episode of 5 minutes, in otherwise tail-suspended rats, can give a significant increase in strength. We now use this phenomenon to study the time sequence of gene expression after loading. 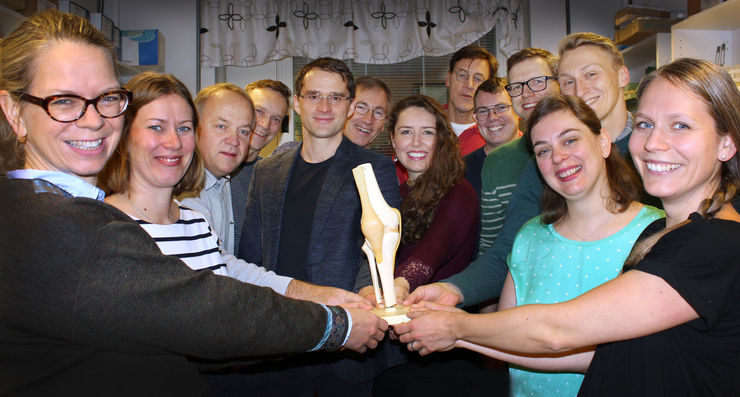 Photo: Ulrik Svedin.This approach has been fruitful: Gene array found only a handful of regulated genes, some of which are tendon specific. We will also use this model to test whether pharmacological interventions, known to influence healing, do so via mechanotransduction. An understanding of these early effects of mechanical loading might open for entirely new therapies.

We also study the role of inflammation for tendon healing via flow cytometry (counting different variants of all immune cells). This has yielded a comprehensive view of previously uncharted territory. Moreover, we found that mechanical loading has a profound influence on the inflammatory reaction during healing.

Possibly, mechanical loading does not only act via “mechanotransduction”, but also via its effects on inflammation. Pernilla Eliasson has just come back to the group; she will set up in vitro tendon models, she has learnt abroad, for more detailed molecular studies on the interaction between mechanical loading and drugs on tendon regeneration.

Using mechanics, gene expression, and flow cytometry, we continue to explore the differences between fractures in different types of bone tissue, and how these differences influence their sensitivity to mechanical loading and drugs. This basic biological understanding of fracture healing is crucial for improved clinical treatment, and the ability to individualize treatment depending on fracture characteristics.

We study the effects of immobilization and various degrees of prescribed loading in patients with Achilles tendon ruptures using our method for mechanical evaluation An exploratory trial is almost completed, and a new randomized trial will start, this time with non-operative treatment.

We have just demonstrated in a clinical trial that a nanolayer of bisphosphonates on the surface of dental implants lead to better fixation 6 months after insertion, using resonance frequency analysis for evaluation.

Our next trial has started, with the goal to demonstrate that the bisphosphonate coating prevents the deterioration of fixation normally seen 4 to 8 weeks after insertion. This deterioration appears to be responsible for most clinical failures. We have just shown that local treatment with a bisphosphonate not only improves the early fixation of hip replacements, but also reduces the number of patients who develop “radiolucent zones”, a radiologic finding considered to signal increased risk of loosening.

We are now starting a randomized double-blinded trial on 1,000 patients to show that a single peroperative dose of a bisphosphonate (zoledronate) will improve patient-experienced function of the artificial joint.

In a nation-wide study of all femoral shaft fractures in women 2008, we demonstrated that the so called “atypical” (i.e. fatigue) fractures of the femur are strongly related to bisphosphonate use. Several follow-up papers followed. We now concentrate on the pathophysiological mechanism, using histopathology and mathematical modeling as well as a new, even larger epidemiologic study.

Traumatic injuries consume a large part of health care resources. The cost for only osteoporosis-related fractures in Sweden is estimated to 5 billion SEK per year (SCB). Moreover, elderly persons often do not recover after a fracture, and many die.

The reason for this is not so much the injury itself, as the burden of pain, immobility and isolation during the healing period. Also healthy, middle-aged people report a fearful loss of quality of life during extended periods after a fracture. The ultimate goal of our research is to shorten this period of suffering. Emerging results show that it is possible.

Pioneering the use of bisphosphonates in orthopaedics. We started early with animal experiments, leading to the first clinical trials showing improved implant fixation in humans (knee replacements and dental fixtures; 6 RCTs).
Challenging the paradigm of “particle disease” in prosthetic loosening. Using animal models for the loosening of total joint prostheses, we demonstrated that mechanical signalling can initiate the full loosening process. This was done at a time when researchers in the field completely and unanimously agreed that wear particles were the sole reason for prosthetic loosening.

First study to show accelerated fracture healing by systemic drug treatments in humans. This randomized controlled trial followed upon years of animal experimentation and efforts to convince the drug industry. We could show that PTH can accelerate fracture healing in humans.
First demonstration of accelerated tendon healing by drug treatment. We showed in a rat model that a BMP analogue could accelerate tendon healing. This was the result of transferring experience from bone research into the tendon field.
First (and only) study measuring the mechanics of human tendon healing. By transferring a clinical research method from the bone field to tendon we could develop a method to quantify healing in human randomized controlled trials. Using this, we have shown for the first time, that appropriate mechanical loading can improve properties of healing human tendons.

Clarifying concepts related to “atypical fracture” and “osteonecrosis of the jaw” (ONJ). In opposition to the prevailing view, we showed that atypical fractures are a side effect of bisphosphonates, and that ONJ is caused by a bisphosphonate-related inability to heal chronic infection (osteomyelitis). 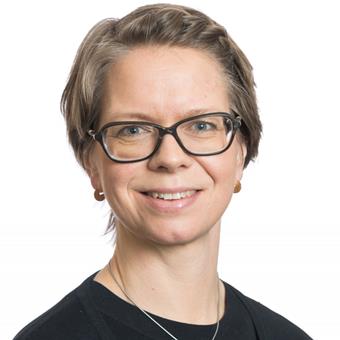 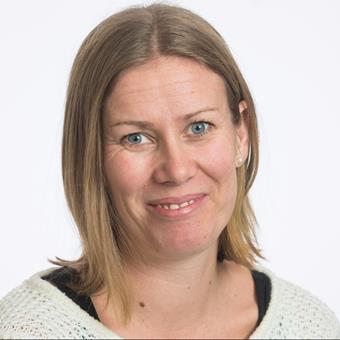 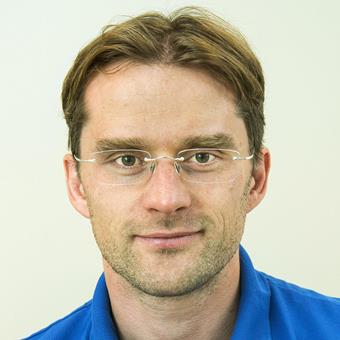 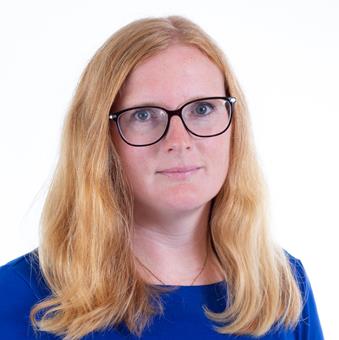 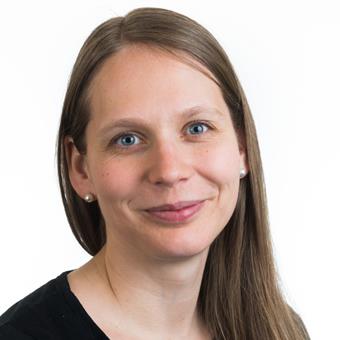 Many older patients are given bisphosphonate for years to treat osteoporosis. But there is a risk that this treatment can lead to a rare type of fracture of the femur.

Many common surgical interventions, such as meniscus surgery, are both costly and risky, and offer no benefits at all – according to agroup of orthopaedic ”mythbusters”.

Research at LiU focuses on bone fractures, tendon injuries and joint replacements, the healing effects of exercise and the benefits and risk of sports.

Division of Surgery, Orthopedics and Oncology