Emissions from the transport sector can be drastically reduced with more streamlined trucks. Researchers at Linköping University have calculated, and road carrier owner Erik Alfredsson has built an initial version of the transport vehicle of the future. The results have also been published scientifically.
More and more goods are being transported on the roads; despite all the ambitious environmental goals and environmental policies, the number of light trucks in Sweden have increased by 33 percent – and the emissions from them have more than doubled over the last 15 years.

But there is a light at the end of the tunnel for everyone worried about the climate and the environment. Erik Alfredsson, owner of Alfredssons Transport AB in Norrköping, today has 55 both light and heavy vehicles in his fleet; they’ve been running free of fossil fuels for two months. The vehicles run on HVO 100, a synthetic biodiesel that is produced from such things as offal.

A new body profile in the computers 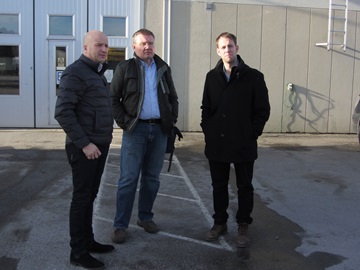 For a few years now, he’s also been working intensely with Professor Matts Karlsson and his doctoral student Petter Ekman from the Division of Applied Thermodynamics & Fluid Mechanics at the Department of Management and Engineering. The goal is to bring down fuel consumption through reducing air resistance. Using advanced computer calculations at National Supercomputer Centre (NSC) at Linköping University, they have produced a body profile for a light truck in which air resistance is substantially reduced without decreasing its carrying capacity.

And also in real life

Mr Alfredsson has had the vehicle built. The base is a traditional Mercedes light truck that has been given self-supporting floors and new, lighter material in parts of the body. The box has been rounded off; all sharp corners and edges are gone, the wheels have been partially enclosed and the roof has a slight, gentle slope backwards like a wing. Over the 90,000 kilometers the truck has travelled so far, its fuel consumption has decreased by at least 12 percent compared to the same vehicle with a traditional body. On average, it consumes approximately 9.1L of biodiesel per 100 km and can load up to 950 kg.

“The environment is important, and it requires us to constantly develop and think in new ways,” Mr Alfredsson says.

That’s why he wants to go further – what works on a small truck should also work on the bigger ones.

“Here, the problem is that no one has total responsibility: the truck is manufactured in one place, the addition in another, and the trailer in a third. What Volvo, Scania and other vehicle manufacturers do to bring down fuel consumption in the vehicle is quickly eaten up by the large, angular cabinet the vehicle is supposed to pull,” he states. 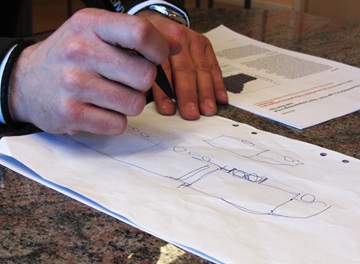 The way forward is an issue of collaboration; the work is under way and the ideas are flowing. Contact has been established between Professor Karlsson and his research team, Mr Alfredsson as a road carrier owner, a company that builds the cabinets that sit on the back of the trucks, another that builds trailers, and finally a company that is developing a system in which drivers’ competence can be assessed. The drivers can compete both against themselves and each other in handling the vehicle as efficiently as possible, fuel consumption and tire wear included.

There is certainly vast amounts of fuel to save by reducing air resistance as much as possible. Air resistance is responsible for a full 30 percent of the total energy consumption; heavy trucks are teeming with ‘energy thieves’. For Professor Karlsson and Mr Ekman, there is only one problem:

“Everyone is talking about the environment, the goals of going fossil fuel-free and lower carbon dioxide emissions from the transport sector are ambitions both in Sweden and in the EU. But when you get down to it, there is almost no research and very little research funds to apply for in heavy vehicle development,” says Professor Karlsson.

“And I wonder how many transport clients really live up to their own environmental policy – that’s something you should research at LiU,” Mr Alfredsson says.

Aerodynamic Drag Reduction of a Light Truck – from Conceptual Design to Full Scale Road Tests. Published in connection with the 2015 SAE World Congress and

Erik Alfredsson constantly on the hunt for ‘energy thieves’

One important aspect of his company’s environmental work is that his drivers keep to the speed limits. Air resistance – and thereby fuel consumption – increase in proportion to speed. At Mr Alfredsson’s road carrier company, each driver has personal goals to live up to – it’s an issue of fuel consumption and keeping to the speed limits, but also how gently they drive and how well the drivers make use of the vehicle’s properties. The goals are individual, and also depend on whether the driver most often drives brief stretches in city traffic or heavy, long-distance transports. All this to be able to deliver to the right place at exactly the right time, at a competitive cost with the least possible impact on the environment. 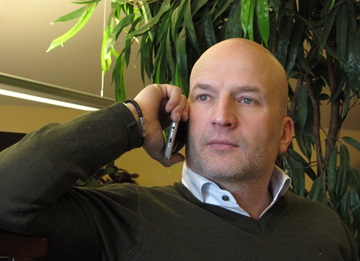 Mr Alfredsson’s purposefulness has led to both lower costs for the company and drastically reduced carbon dioxide emissions:
• Fuel consumption has decreased by 19 percent
• Tire wear by 45 percent
• In principle all light damage to the trucks is gone and accidents are few – almost non-existent.
• The transition to fossil-free fuels means that the carbon dioxide emissions from the company’s 55 vehicles decreased by 87 percent.

“The people at the insurance company are delighted, and wondering how we do it,” Mr Alfredsson tells us.

The vehicles have large tanks and are driven so economically that only one filling station is needed – a garage a few hundred meters from the company. There is safe access to good-quality HVO there.
HVO, which stands for Hydrogenated Vegetable Oil, is produced through hydrogenation of vegetable and animal fats. Driving a heavy truck to Norway and back on one tank is no problem. But if problems do arise, the HVO fuel can be mixed with regular diesel.

And the company isn’t having difficulties finding capable drivers to employ.

“I get calls every day.”