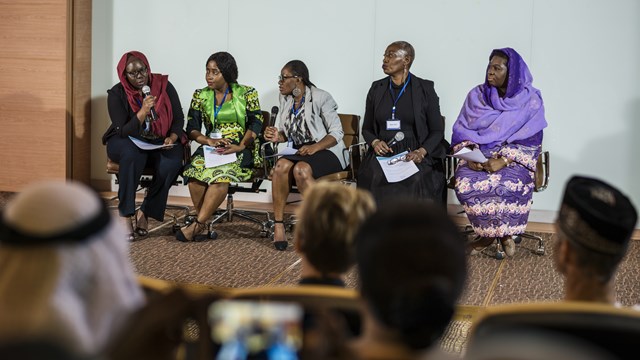 UN meetingThere is no doubt that climate change is one of the greatest challenges of our time. Since the early 1990s, governments worldwide have tried to address the situation by way of the UN’s climate change negotiations.

In November it’s time for the UN’s annual Climate Change Conference, COP 23. It will bring together all the signatories of the Climate Change Convention for negotiations on how to adapt to climate change, how greenhouse gases can be reduced and how it’s all to be financed.

For years there has been criticism that efforts to address climate change have been too slow and are ineffectual. But the reality isn’t quite as pessimistic as it has been made out to be. At least not according to climate change researchers Björn-Ola Linnér and Eva Lövbrand.

Björn-Ola Linnér compares the diversity of actors at the major UN climate change conferences to a smorgasbord. The cold cuts, hot dishes and desserts correspond to states, a wide range of non-state actors, interstate organisations and many others.

“It’s easy to forget all the good things that take place under the guise of the UN, because we’re dealing with processes that run for years,” says Björn-Ola Linnér, whose research concerns how political processes and actors influence societal shifts toward sustainable development.

Agreements are important – but they’re not everything

In a special issue of the scientific journal “Environmental Politics”, researchers investigate the role of non-state actors in international climate change efforts. Björn-Ola Linnér and Eva Lövbrand are co-editors, together with Karin Bäckstrand and Jonathan W. Kuyper, from Stockholm University. Together with their colleague Mattias Hjerpe, they conclude that the UN’s climate change conferences do make a difference – far beyond the conference venues.

“The focus is often on the conference agreements, and of course these are important, but what makes the conferences so valuable are all the social relationships and the diversity of national and transnational actors, activities and policy projects,” says Senior Lecturer Eva Lövbrand, who researches on the interaction between environment, knowledge and politics.

With the help of 12 interviews and 2,249 questionnaires, the image of the UN as a political hotpot has emerged. The climate change conferences serve various purposes for those involved, and the diverse meetings are held together by the participants’ varied expectations, motivations and experiences.

“Most participants attend the conference in order to network, build interpersonal relationships, learn from one another and foster a sense of community. They then benefit from these things when working against climate change at the local level,” says Eva Lövbrand.

One group that has gained more prominence in recent years is the non-state organisation, which includes cities, businesses, religious organisations, aboriginal peoples, activist groups and trade unions. This became even more evident this summer when the United States left the climate change negotiations.

“This means that the non-state actors took an additional step forward. The US disappeared as a national party, but on other levels they are very much present. Progress in climate change issues isn’t only achieved by states talking to states, or by actual agreements; it also comes about through discussions in corridors, or back home, when non-state actors work locally on environmental issues,” says Björn-Ola Linnér.

The work to combat climate change isn’t absolutely reliant on the participation of the US at the national level. Actually, not having an obstructive party at the conference table can make things easier.

The researchers say that on the climate change front, a new landscape of international cooperation has emerged since the unsuccessful 2009 conference in Copenhagen. After that meeting, climate change efforts shifted from top-down to bottom-up, and states and non-state actors began to collaborate more.

“Through the Paris Agreement, non-state actors have had more opportunity to play a role in the multilateral processes. They are important for the implementation of decisions and guidelines, as experts in their fields and to ensure that national commitments are followed,” says Eva Lövbrand.

“Increasingly, the UN’s role is more that of a orchestrator, and the convention’s secretariat holds the baton for various actions and measures. The orchestra isn’t always synchronised, but that doesn’t matter – it makes things more dynamic,” Björn-Ola Linnér continues.

The conclusion is that the UN has become less top-down, that various actors collaborate more and that actors from outside the negotiation table are gaining more influence. Björn-Ola Linnér feels this is positive – but that’s not to say that the UN shouldn’t be scrutinised.

“It doesn’t matter that a fancy agreement is signed, if for example businesses or local government don’t see it as relevant. Every part of society must be involved. For this reason it’s positive that global and local players are increasingly acting together at the climate change conferences,” says Björn-Ola Linnér.