Researchers at Linköping University have developed in collaboration with French colleagues a small device that both detects the initial signal of an epileptic attack and doses a substance that effectively stops it. All this takes place where the signal arises – in an area of size 20×20 µm known as a “neural pixel”.
The results, from the Laboratory for Organic Electronics at LiU’s Campus Norrköping, have been published in the prestigious journal Proceedings of the National Academy of Sciences (PNAS), with Asst. Prof. Daniel Simon as main author.

According to a recently produced estimate, no less than six percent of the Earth’s population suffers from some type of neurological illness such as epilepsy or Parkinson’s. Some medicines are available, but when these are taken orally or injected into the bloodstream, they also end up where they aren’t needed and may cause serious problems. All medicines have more or less severe side effects, and no fully satisfactory treatment for neurological illnesses is available. 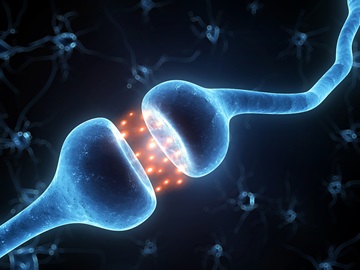 Photo credit: EraxionNeurons, or nerve cells, are the cells in the body that both transmit and receive nerve impulses. The small 20×20 µm device developed by the scientists can both capture signals and stop them in the exact area of nerve cells where they arise. No other part of the body needs to be involved.

“Our technology makes it possible to interact with both healthy and sick neurons. We can now start investigating opportunities for finding therapies for neurological illnesses that arise so rapidly and so locally that the patient doesn’t notice them,” says Daniel Simon.

The experiments were conducted in the laboratory on slices of brains from mice. The device consists of a sensor that detects nerve signals, and a small ion pump that doses an exact amount of the neurotransmitter GABA, a substance the body itself uses to inhibit stimuli in the central nervous system.

“The same electrode that registers the activity in the cell can also deliver the transmitter. We call it a bioelectronic ‘neural pixel’, since it imitates the functions of biological neurons,” says Daniel Simon.

“Signalling in biological systems is based on chemical signals in the form of cations, which are passed between transmitters and receptors, which consist of proteins. When a signal is transferred to another cell, the identification of the signal and the triggering of a new one occur within a very small distance – only a few nanometers. In certain cases, it happens at the same point. That’s why being able to combine electronic detection and release in the same electrode is a major advance,” says Professor Magnus Berggren. 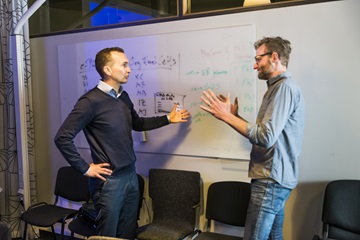 Photo credit: Thor BalkhedThe small ion pump, which was developed at the Laboratory for Organic Electronics, attracted a great deal of attention when it's first application as a therapeutic device was published a year ago. The sensor that captures the nerve signal has subsequently been developed by the LiU researchers’ collaborators at the École Nationale Supérieure des Mines in Gardanne, France. The mouse experiments were performed at Aix-Marseille University. The entire device is manufactured from conductive, biocompatible plastic.

The Swedish part of the research was funded by Vinnova, the Swedish Research Council, and the Knut and Alice Wallenberg Foundation. The work took place at the OBOE centre, under the leadership of Asst. Prof. Daniel Simon and Professor Magnus Berggren.