Magnus Berggren received his MSc in Physics in 1991 and graduated as PhD (Thesis: Organic Light Emitting Diodes) in Applied Physics in 1996, both degrees from Linköping University. He then joined Bell Laboratories in Murray Hill, NJ in the USA, for a one-year post doc period focusing on the development of organic lasers and novel optical resonator structures.
In 1997 he teamed up with Opticom ASA, from Norway, and former colleagues of Linköping University to establish the company Thin Film Electronics AB. From 1997 to 1999 he served Thin Film as its founding managing director and initiated the development of printed electronic memories based on ferroelectric polymers.

After this, he returned to Linköping University and also to a part time manager at Acreo Swedish ICT. In 1999, he initiated the research and development of paper electronics, in part supported by several paper- and packaging companies. Since 2002, he is the professor in Organic Electronics at Linköping University and the director of the Laboratory of Organic Electronics (LOE).

Magnus Berggren is one of the pioneers of the Organic Bioelectronics and Electronic Plants research areas and currently he is the acting director of the Strategic Research Area (SFO) of Advanced Functional Materials (AFM) at LiU. In 2012 Magnus Berggren was elected member of the Royal Swedish Academy of Sciences and in 2014 he received the Marcus Wallenberg Price. 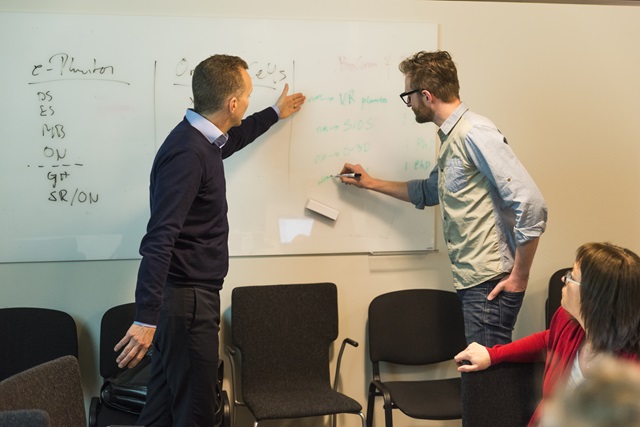 Help us to stop motor neurone disease, Alzheimer's and Parkinson

Professor Magnus Bergren at Linköping University is developing the electronic medicines of the future. To get there, we need dedicated researchers, as well as dedicated financial backers. With your support, they can become reality.

Magnus Berggren, director of research in the Laboratory of Organic Electronics, has been awarded a personal European Research Council Advanced Grant of around EUR 3 million, for research in the borderland between medicine and electronics.

Magnus Berggren, professor of organic electronics at LiU, has been awarded more than SEK 28 million in the coming seven years from the Swedish Research Council for research into electronic neuromedicines.

The Laboratory of Organic Electronics is growing – just like the trees.

The Laboratory of Organic Electronics at Campus Norrköping, is expanding and recruiting seven doctoral students and two international postdocs to work at the Wallenberg Wood Science Center, WWSC.

The Knut and Alice Wallenberg Foundation has decided to provide up to SEK 400 million for WWSC 2.0, the Wallenberg Wood Science Center, between now and 2028. KTH, Chalmers, Linköping University and the forestry industry are participating.

Five researchers at LiU have each been awarded SEK 1 million per year for four years in research grants from a joint initiative by the Swedish Energy Agency and the Swedish Research Council in energy-oriented basic research.