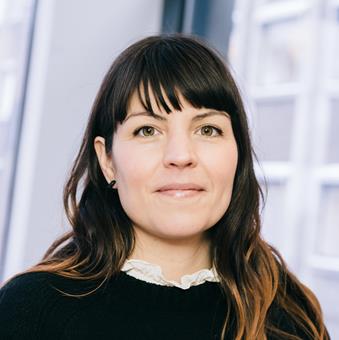 Neuroimaging research interests include investigating the brain-gut-microbiome axis in relation to fMRI connectivity measures and meditation as a modulator of brain function for potential therapeutic applications.

Rozalyn Simon began her higher education studies with a self-designed pre-medical bachelor’s curriculum incorporating medicinal botany, anthropology, and psychology (BSc 2001, University of Georgia, Athens, USA). In 2003, she began her graduate work in the chemistry department at the University of California, Santa Cruz. There, she joined the laboratory of Scott Lokey, focusing on the synthesis and analysis of novel small molecule libraries for inhibition of metabolic pathways in cancerous cells. In 2007, she received her Master’s in Chemistry and Biochemistry.

Later that year, she moved to Sweden, and began her PhD studies in chemistry at Linköping University in the group of Peter Nilsson. Her research focused on synthesis of small molecules (oligothiophenes) for detection and classification of protein plaques in amyloid related diseases such as Alzheimer’s. In 2014, she received her PhD.

During her PhD studies, she became increasingly intrigued by the psychological aspects associated with amyloid related diseases such as Alzheimer’s, and the anatomy and neurofunction underlying the "loss of self". She thus chose to follow the AD/neuroscience aspects of her PhD toward more direct clinical applications. To this end, she shifted focus into fMRI techniques and was awarded a postdoctoral fellowship at Linköping University’s Center for Medical Image Science and Visualization (CMIV) to study the neural correlates of meditative practice in neurodegenerative disorders.

In 2017, she began her Assistant Professorship at Linköping University, focusing on neuroimaging techniques to investigate brain function in relation to meditative practices in neurodegenerative disease, and the gut-brain-microbiota axis in disorders such as IBS, in an effort to better understand the interplay between physiological and cognitive mechanisms in disease states. Particular areas of interest include brain-gut-microbiota interactions as well as the neural correlates behind successful therapeutic cognitive interventions such as hypnotherapy and meditation.

In 2020, Rozalyn joined the leadership team of the Forum Scientium graduate research school at Linköping University.

Rozalyn divides her time 50/50 between her Linköping University activities in functional imaging and the Forum Scientium graduate research school&nbsp;

In our research group, we use combined fMRI-EEG and mathematical modelling in studies of brain function related to different mental states e.g., sleep, wakefulness, meditation, and pain.

2007 – Masters in Chemistry and Biochemistry, University of California, Santa Cruz

We conduct research in medical radiology and visualisation, radiation physics, radiochemistry and radioecology.