Many currently used drugs are ineffective for treating complex diseases. This is likely due to a complex interplay between myriads of minor-effect genetic and epigenetic factors interacting in different combinations for each individual. By analyzing the governance of the immune system, we want to develop customized high-efficiency drug treatment without side effects.

Many common drugs work ineffectively for substantial sub-groups of patients. This results from the interplay between a multitude of small-effect genetic and epigenetic factors in complex diseases. In addition, treatment is started late when patients have received enough symptoms, which could take several years in common diseases as allergy, cancer and diabetes.

Recent decades have generated large measurement progress, which enables us to measure whole cell molecular state or imprint (also called omics) at a low price. One application of these imprints, called precision medicine, aims to, among other things, provide custom high-efficiency drug treatment without side effects. This could potentially also be utilised to use old drugs for new diseases. This new medicine requires new holistic analysis tools. Our research focuses on the analysis of the control of the immune system and there specifically:

3) Implementing easy to use analytical tools based on 1) and 2) for general use in clinical medicine.

The overarching goal of the project is the development of generally applicable system-based tools for dissecting complex diseases. To this end, we work to decipher healthy differentiation networks of immune defense and disease networks, as well as work on implementation of the advancements to the clinical community. In order to handle the computational complexity of genome-wide networks, in each sub-project, we simplify the problem into three coarse-graining levels, based on recently derived concepts, ranging from disease network modules, upstream transcription factors (TFs), to nonlinear modelling:
A) The most relevant genes for disease development tend to co-localise in so-called molecular disease modules. Disease modules shared across multiple T-cell diseases may have more relevance for pathogenesis of disease than disease specific modules.
B) The upstream TFs with most GRN targets in TH differentiation correspond to early regulators of T cell diseases, and can be used for predictive medicine.
C) Large-scale simulation based modelling (LASSIM, last author Gustafsson, PLoS Comput. Biol, 2nd revision) can perform mechanistic ODE expression modelling from the upstream TFs onto the entire genome in parallel using the national super-computer.

1) Identification of a validated multi-layered dynamical model
Understanding the control system of the normal immune defense would make it possible to perform accurate computer-based predictions of treatment effects that aims to manipulate the immune defense, which could drastically change the way drugs are developed. Examples could be immunotherapy that manipulates healthy T-cells to fight cancer, and immune-modulating treatment of allergy and auto-immune diseases. Moreover, as T-cells circulate through the whole body for the purpose of directing the immune defense, they can also serve as early detectors of disease.

2) Synergistically integrating multiple genomic layers for disease understanding
The background to this sub-project is that diseases are most often analyzed solely based on genetics or static epigenetics (gene expression and methylation). My recent results in multiple sclerosis (MS) and seasonal allergic rhinitis (SAR) shows that transcriptome dynamics derived from models of in vitro stimulation paired with genomics is of uttermost importance for identification of early biomarkers which predicts patient sub-types as they appear several years later [5, 16]. For example, in MS we defined an expression module from an in vitro model from one day of T-cell activation in patient vs controls, which remarkably could predict disease severity two years later by measuring corresponding CSF proteins, and also predicted response to treatment (Hellberg, et al Cell Reports). 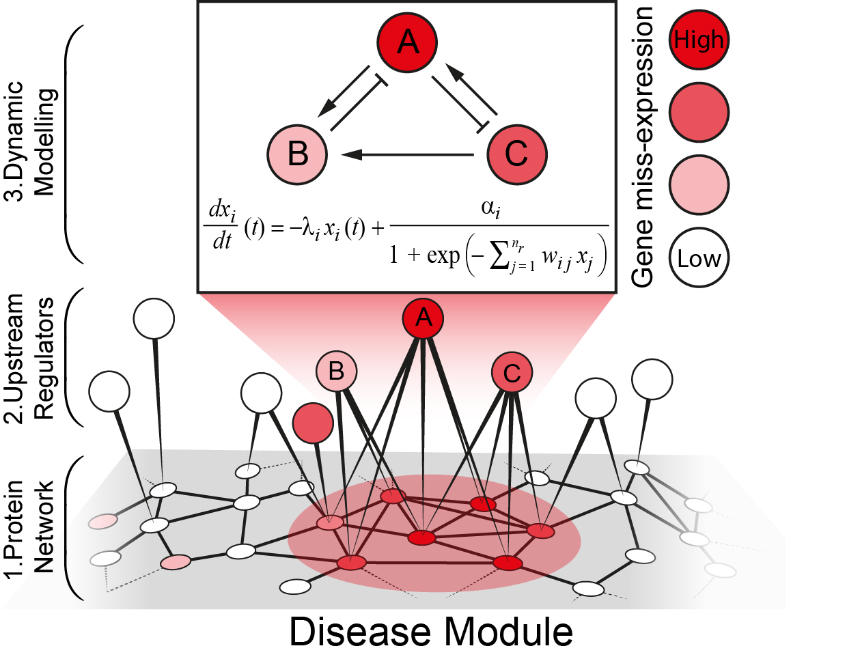 Predicting the risk of severe side effects of cancer treatment

Some patients experience life-threatening side effects during cancer treatment. Researchers at LiU have developed a model that can predict which patients have a high probability of side effects.

An artificial neural network can reveal patterns in huge amounts of gene expression data, and discover groups of disease-related genes. The scientists hope that the method can eventually be applied within precision medicine.

Predicting the severity of multiple sclerosis

Cells in the immune system of patients with multiple sclerosis behave differently from those of healthy individuals. LiU researchers have exploited this difference to develop a method that can predict disease activity in multiple sclerosis.