At the global level, the number of people seeking refuge has never been as high as today, and never have so many applied to come to Sweden. Suad Ali is an expert on Sweden’s refugee quota, and it’s against this backdrop that she has worked tirelessly for refugees worldwide. For her dedication, Suad Ali has been chosen as one of Linköping University’s two Alumni of the Year. 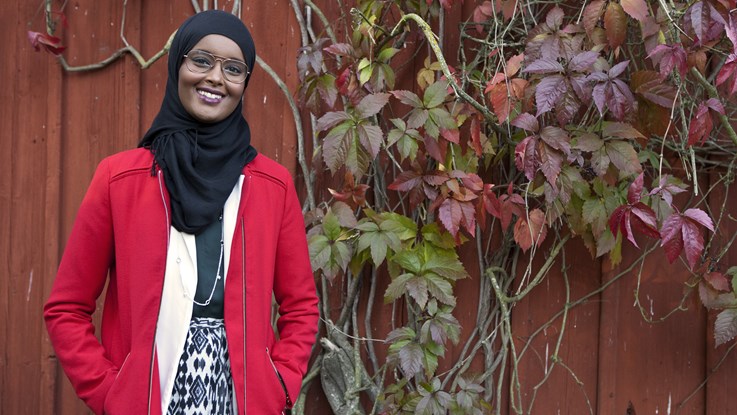 “Look at Malala and what she has achieved. She has proven that age doesn’t matter a bit,” says Suad Ali, walking briskly across the campus at Linköping University. It’s an unusually warm Friday evening in September, and her only available time this week.

“Young people are constantly hearing that humanitarianism is a generational thing. As if it’s not that important. But it really is,” she says, as she zigzags through a storm of bike-riding students.

She opens a door and walks into a department where she studied political science four years ago. A sign on the wall says “Ambassaden” – Swedish for The Embassy. Which could be a future workplace for her. As could the UN Headquarters in New York City.

“The most important thing is to be where I can make the most difference. Where that is, I don’t know yet, and I don’t need to make up my mind right now.” 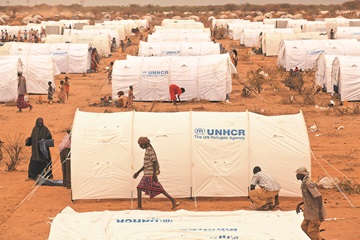 Photo credit: UNHCRShe’s right; she has time. At just 26 years of age Suad has already led a Swedish Migration Agency delegation whose mission was to prepare 200 refugees from the world’s largest refugee camp for life in Sweden. She has had a column in the Swedish business magazine Chef; and has been awarded the title of Super Talent by Veckans Affärer, another Swedish business magazine. She has also been on the staff of the Swedish Migration Agency’s director-general Anders Danielsson.

Earlier in the week the Swedish government announced that the number of UN convention refugees will increase from the current 1,900 to 5,000 at the end of 2018. By raising the quota, more people can safely make their way to Europe.

“I see immediately how our work with the quotas makes a difference. When you’re in a refugee camp, you see how different decisions affect the people there. By seeing their day-to-day lives in the camp, I understand more about what my job involves.”

But also on a personal level, Suad has had to reflect upon what it means to be a refugee. When she was a year and a half old she and her family left Somalia during the civil war, and the Dadaab refugee camp served as a home while they waited for the conflict to end.

“When I was in Dadaab last year I met people my own age. Their lives could have been mine.”

Instead her family ended up in Sweden, and now, visiting the camp many years later, she is a well-educated, trilingual expert employed at a government agency in Sweden, who has also taken courses in field safety.

Courses that proved useful during a terrorist attack in the camp.

I wasn’t scared; I was cautious and security conscious. At that moment my focus was on getting my team home. I’m an ordinary civil servant who does her job. But it’s tragic for the people who live amidst this,” she says, nudging her eyeglasses higher up her nose.


Happiest in the field

Her work requires lots of travel – between her home in Linköping and the Swedish Migration Agency’s office in Norrköping, the refugee camp in Dadaab and UNHCR’s head office in Geneva. But she is happiest ‘in the field’. When she gets to meet the people behind the statistics, and see their lives, she feels that her work brings positive outcomes.

“Perhaps more so than sitting in an office at the UN in New York.”

Suad got her interest in humanitarian issues from home. Her parents, who have also been involved in these matters, always encouraged discussions on the state of the world. They also impressed on her what she is capable of:

“Oh, you want to write a book? Write a whole library!”

But her interest in social issues grew from her experiences during her school years.

Suad came to Sweden as a three-year-old. But although she had grown up in Sweden, her school placed her in Swedish classes for second-language learners.

“In school the approach was one-size-fits-all. All the immigrants were put there, regardless of our skills. Not until junior high school did I get to take a language test. After that I was free.”

School taught her that she was different, and that consequently she would have more difficulty than everyone else.

“That was something I took for granted for a long time – that everything would be more difficult for me.”

The outsidership imposed by her school, she has shaken off. Today she is happy that she can be what she herself lacked at school: a role model.

“A while ago I was sitting at the Linköping train station, working. A girl came up to me and said that I was the reason she was studying political science. I love the idea that I can inspire other people to dream.”

Not bad for an ordinary civil servant.