The Swedish government has appointed Lena Sommestad as new chair of the university board at LiU. Lena Sommestad has previously been minister for the environment and is today the county governor of Halland. 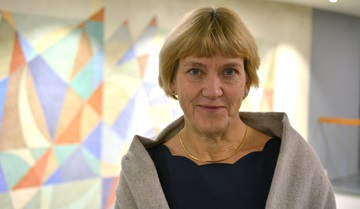 She will take up her new post immediately and as early as next week will be in place, chairing her first meeting of the board.

“I feel that this is a great honour for me, and I am truly happy that my new role will bring me back into the academic sphere. I hope that my experience as researcher and teacher, and the years I have spent as a politician, in the business world and in governmental agencies will enable me to contribute to the development of LiU, in collaboration with the university board. It will require teamwork,” says Lena Sommestad.

Vice-Chancellor Helen Dannetun comments the government’s decision thus: “I am looking forward to working with Lena Sommestad. She is a person of many talents. She is currently county governor, and has experience from not only the academic but also the political world”.

There can be no argument about Lena Sommestad’s impressive CV.

She worked as professor in economic history at Uppsala University, and was head of the Institute for Futures Studies during the period 1998-2002. She then served in the Swedish social democratic government as minister for the environment, 2002-2006. After two years as member of parliament, Lena Sommestad was appointed county governor of Halland in 2014.

Lena Sommestad has a background as teacher in folk high schools and journalist. Her CV includes also three years as managing director for the Swedish District Heating Association.

What impression do you have of the university that you are now to lead in your role as chair of the board?

“Well, firstly, this is one of the larger institutions of higher education in Sweden, the sixth largest. LiU for me has always been associated with innovative thinking, a place where both research and education have great width and depth. The creation of the Department of Thematic Studies, the introduction of problem-based learning, and the establishment of new innovative programmes such as the master’s degree in industrial engineering and management are all early examples of this. I have a background in the social sciences, and as such I am inspired by the multidisciplinary approach that characterises my image of LiU. I am looking forward to becoming deeply involved with Linköping University.”

Lena Sommestad has also worked in several roles for the Swedish Social Democratic Party, and was President of the Social Democratic Women in Sweden between 2011 and 2013, working with political questions about gender equality and feminism.

Lena Sommestad takes over from Anna Ekström, who was appointed minister for upper secondary school and adult education and training.