Skin colour matters, also in Sweden. But many people don’t accept that racism is a problem here – only in other countries. So claims doctoral student Victoria Kawesa, who writes about black feminism and whiteness in Sweden. 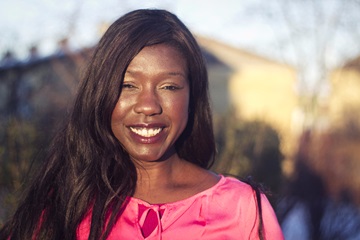 You are working for your doctorate at the Department of Thematic Studies – Gender Studies. What is the topic of your thesis?
Black feminism and whiteness in Sweden. I analyse not only everyday racism but also institutionalised racism, such as is found in schools, workplaces and the health and medical care system. The thesis is based on several theories drawn from, among other fields, black feminism, and I also bring up my own experiences of being black in Sweden. I have lived here for 32 years.

What do you mean by “whiteness”?
Skin colour matters, also in Sweden. The further away from white that you are, the darker your skin, the poorer are the life conditions offered. We have a power structure in Sweden based on race, where whiteness is taken as the starting point for what is human and right. This is not something that white people in Sweden think about, but it’s extremely obvious to black people. Just as we can talk about a gender-based power structure, we can talk about a race-based power structure. The way that white people view black people communicates ideas based on racial prejudices, based in turn on the way that white people have learnt to view black people, or the inverse – how they have learnt to view themselves as white, that they are the norm.

Have you any results for the thesis yet?
Not yet – I won’t be finished for another year. What I can say is that we have a structural racism in Sweden that can be measured by objective measures. Afroswedes who have taken further education, for example, experience the greatest difficulty getting a job related to their education. More black people have been killed in recent years as a result of racist acts. Afrophobic hate crimes have increased in frequency more than other hate crimes after 2008. These crimes are often acts of violence carried out by strangers on the street.

What are your own experiences of being black in Sweden?
Living in a black body means seeing things that those who live in a white body don’t see. One example is being always aware of how one’s skin colour is denigrated and seen as deviant. Always being aware that someone can at any moment threaten me, insult me, physically attack me. Never being able to relax when outside. But the question of race has been made invisible in Sweden.

The conference on gender research dealt with issues closely related to your thesis, such as exclusion and racism, and migration. You gave a talk at the conference. What did your talk discuss?
I described the civil rights movement Black Lives Matter that started a few years ago after several incidents of police shooting innocent black men in the US. I was one of those who brought the Black Lives Matter movement to Sweden, and I described the resistance with which it was met in both social and traditional media. I pointed out that it is generally believed that racism is not a problem in Sweden, but something that happens somewhere else. I explained that we must turn a spotlight onto these questions, otherwise the oppression and violence will just continue. I think that my talk opened the eyes of many people at the conference. The whole conference dealt with making important issues of our time visible.