The Wallenberg Centre – research at the medicine-technology interface

The new Wallenberg Centre for Molecular Medicine at Linköping University was officially opened on 8 December. The centre is one component of a major initiative in Swedish research in the field of life sciences. The opening was marked by a two-day scientific symposium. 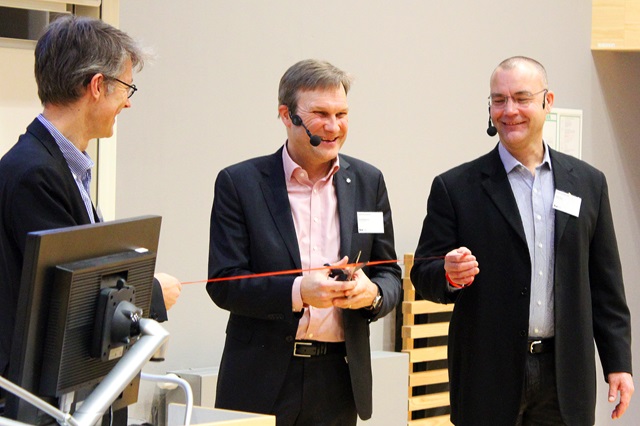 Photo credit: Karin S?derlund LeiflerResearchers at the Wallenberg Centre for Molecular Medicine, WCMM, will in different ways get to grips with research questions in the interface between medicine and technology. These include visualisation and image processing, biomaterials and biosensors, regenerative medicine and bioinformatics. The centre is one component of a major initiative in Swedish research in the field of life sciences, to which the Knut and Alice Wallenberg Foundation will contribute SEK 150 million in the coming nine years. LiU is contributing SEK 115 million and Region Östergötland SEK 56 million. Similar Wallenberg Centres, with other specialisations within the life sciences, have been set up in Lund, Gothenburg and Umeå. 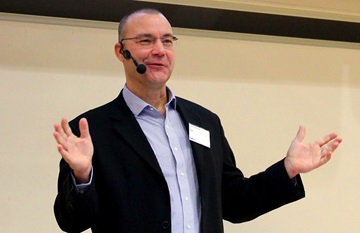 “Several researchers have been recruited from outside Sweden, and will start work here next year.”

At the two-day symposium that was held to mark the opening of WCMM, several researchers associated with the centre gave examples of research that can arise when medicine and technology meet. Janos Vörös, professor at ETH Zürich in Switzerland and member of the scientific advisory board for WCMM, described how his research group had developed flexible electronic components that can be implanted into living tissue. The researchers hope to be able eventually to use the technology to stimulate damaged nerves in the spinal cord and enable patients to regain the ability to walk. 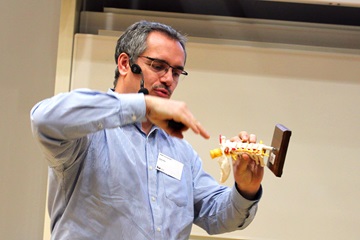 Photo credit: Karin S?derlund LeiflerJanos Vörös pointed out that many people who damage their spinal cord lose control of their urinary bladder. Some experience this as a greater problem than not being able to walk. For this reason, the Swiss research group has developed extremely flexible sensors that can be inserted into the bladder to measure how full it is. The sensor can be read by a detector outside the body and the result displayed on a mobile phone with the aid of RFID technology (which is used in such applications as bus tickets and theft-prevention systems in stores). The bladder sensor is now being evaluated in a study in which owners of dogs with incontinence problems can choose to take part. The owners receive a signal from the sensor that it is time to take the dog for a walk, and in this way accidents are prevented. The researchers are hoping that it will become possible to test the sensor in people with spinal cord injuries.

Janos Vörös noted that students have made important contributions during the development of the sensor.

“What I am most happy about is not that WCMM will be home to 15 brilliant researchers, but that it also means that hundreds of students will benefit from having access to these researchers and their research. We should all be happy about this, because we will be able to revolutionise the medicine of the future using technology.” The social science literature has long viewed homophily and network-based job recruitments as crucial drivers of segregation, but researchers at Linköping University and ESADE, Ramon Llull University show that this view must be revised.

Researchers at LiU have shown that coordinated management of excrement from animals and humans could save nearly EUR 100 million each year. The key is to produce the biogas from the excrement before it is used as fertiliser.

A generous man ahead of his time

A man ahead of his time who made important contributions to computer science and who was ever willing to share his knowledge. The description is that of Harold “Bud” Lawson, founder of a scholarship at Linköping University.

Industrial design – between creativity and efficiency

Good design requires balance. It must be new, but not too deviant, while at the same time satisfying considerations of economy, function and market needs. It must also be easy to use for new products and easy to adapt to future needs.

Future quantum computers might use electron spin to process information. Researchers have now constructed a component in which information can be efficiently exchanged between electron spin and light – at room temperature and above.

The cost of a uterine transplantation

Sweden’s acclaimed research on uterine transplants has taken a new step forward – into the field of health economics. Researchers at Sahlgrenska Academy and LiU have for the first time estimated on a scientific basis the cost of the treatment.

LiU Innovation and the human rights organisation Civil Rights Defenders have been working together for two years on new innovation processes. LiU students have played a central role in the work.

One prospective source of renewable energy is hydrogen gas produced from water with the aid of sunlight. LiU researchers have developed a material that exhibits promising properties to capture solar energy and split water for hydrogen gas production.

Researchers are involved in the campaign to make designer drugs illegal as quickly as possible. Henrik Gréen investigates how new psychoactive substances act, and why some designer drugs are more lethal than others.

A boost for interdisciplinary science turns 25

Some 200 doctoral students and 50 postdocs have attended the graduate school / network Forium Scientium positioned at the intersection of medicine, technology and science. For 25 years, Forum has gained momentum and maintained its relevance.

During the corona pandemic, we have had to get used to spending a lot of time within the four walls of home. But do we feel comfortable in our homes? Social worker and LiU alumna Clara Johansson changed her life in midstream and became tidying coach.

The Center for Medical Image Science and Visualization participates in a major European collaboration for artificial intelligence in digital pathology. The project has received financing from the Innovative Medicines Initiative under Horizon 2020.

The risk of being bullied at work is twice as high if you were born abroad. And if you come from a culture that is culturally dissimilar to Sweden’s, the risk is even higher. These are the results of a study from LiU.

Interview with vice-chancellor: Reduced travel can be effect of pandemic

LiU’s vice-chancellor Jan-Ingvar Jönsson sees many effects of the corona crisis. A reduction in travel might be a permanent one.

Clean fuels not always so green

A vehicle with zero emissions can  have a large impact on the environment when the complete life cycle is considered. A study shows the significance of electricity production for the emission of greenhouse gases from fuels.

Swedish company ftrack, with the three LiU alumni Fredrik Limsäter, Björn Rydahl and Mattias Lagergren at its head, has been awarded a scientific and technical Oscar for its project management system – a tool to improve the film industry.

Extremely preterm infants can suffer from a life-threatening inflammation of the gut. A new study has shown that supplements of a lactic acid bacterium may have positive effects by increasing the diversity of intestinal bacteria in these infants.

Student Health is there for the students – even in distance mode

Student Health meets students who, for instance, feel isolated and have problems with motivation. The questions haven’t changed but the problems are increasingly corona-related.

The mystery of the missing energy – solved

The efficiency of solar cells can be increased by exploiting a phenomenon known as singlet fission. A research group led by scientists at Linköping University has discovered what happens during singlet fission and where the lost energy goes.