Waste management, climate impact, employment, a secure energy supply – there are many ways that biogas can make the world a bette place. Researchers from several countries took part at the beginning of June in
a digital seminar to discuss the opportunities and challenges of biogas.

The participants put on their cameras to say thank you and goodbye, for this time. All in all, around 100 persons took part in the digital conference.

Part of the future

The BRC annual conference is normally held on-site in Östergötland, but this time was held as a digital conference using remote technology. This made it possible for considerably more participants to attend. The one-day seminar attracted researchers and those working in practical applications from Italy, France, Germany, Great Britain, Cuba, Brazil, India, South Africa and, of course, Sweden.

One of the overall issues was, quite simply: How can biogas contribute to a better future for mankind? 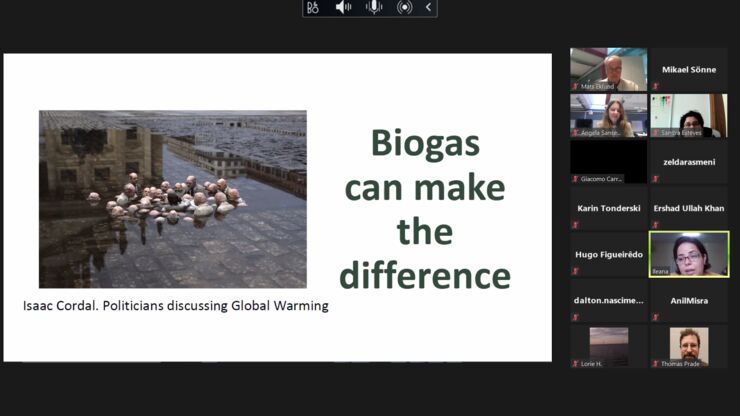 One of the last slides during the conference, from Ileana Pereda Reyes, Technological University of Havana, Cuba.

“Biogas is not a religion, and as a scientist I’m reluctant to say that I believe in biogas. You should always be open for other, even better alternatives. But, it’s true, I believe that biogas can play an important role in the conversion to a sustainable society. One major advantage is that the gas is already in production, and the amount can be rapidly increased”, says Lorie Hamelin, researcher at the Toulouse Biotechnology Institute.

The main method of achieving a significant increase in the production of biogas is to increase the use of manure and rapid-growth perennial grasses.

“Our calculations show that the volume could be increased by a factor of four. This is also an important question: if we truly believe in biogas as a future source of energy, how much more can we produce?”, says Lorie Hamelin.

Vehicle manufacturer Scania sees three cornerstones in the conversion to long-term sustainable transport. Alternative fuels – biogas, other biofuels and electrification – is one of them. The others are requirements for energy efficiency, independently of which fuel is used, and smart transport systems – such as the joint transport of goods and people.

The drivers of the conversion of the transport are not just climate change, but also problems with air-borne contaminants and traffic flow in cities, increased requirements for resource efficiency, and the safety risks inherent in too strong a dependence on oil. Investment in liquified biogas, both for maritime transport and long-distance heavy goods transport, has been important in Sweden, and has led to many new filling stations being built.

Scania considers biogas to be an important export opportunity for Sweden in the future, and possibly even its next huge export success. This will involve not only the individual products but the complete “Swedish model” with raw materials, technology, production and distribution.

“But for this we need a ‘Biogas Sweden Ltd.’, i.e. joint ventures in which different parties collaborate. At the moment, coordination between regulations, policy and business is too poor to give effective export”, say Henrik Dahlsson and Erik Hansson from Scania point.

Opportunity in the crisis

Three seminars were held in parallel after lunch, in which BRC researchers presented current projects in areas such as technology/processes, systems and society. The afternoon session also saw presentations from participants from India, South America, Italy, Brazil and Cuba about developments in these countries. 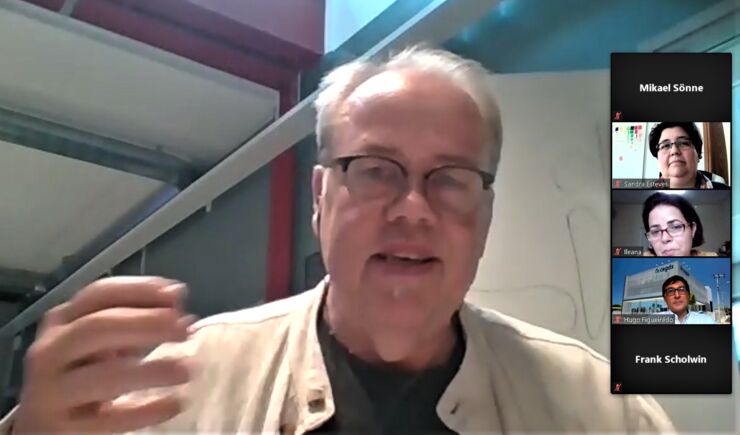 “It wasn’t initially clear that we could hold the conference: we were considering cancelling or postponing it. But then I realised that I could invite people who I had previously met in various contexts, and ask them to share their experiences”, says Mats Eklund, director of BRC.

“One of the few advantages of the corona crisis is that we can open meetings like this to international participation. I hope that this will be the start of a more long-term collaboration.”

The presentations covered a wide range of topics, and included plans for government support in Italy, current research projects in India, commercial projects in Brazil, experiments using waste from the sugar cane industry on Cuba, and a rural project in South Africa. The latter concerns a poor region with ten villages and 700 households, where experiments are being carried out with small digestion chambers that provide the inhabitants with fuel for cooking and biofertiliser.

There are many advantages, including some that are not often mentioned in Sweden.

“Exploitation of the forest is less when the felling of wood for fuel is reduced. Hygiene is improved when waste is managed properly. And the risk of diseases of the eyes and lungs is lower since smoke from open fires is avoided”, says Zelda Rasmeni, researcher at the University of Johannesburg, who is following the project.

The situation of women and children, who are often compelled to walk long distances to collect wood, is also improved when biogas is used.