How do you make nanoparticles and use them to purify water? Is it really possible to control plant photosynthesis? An advanced chemistry lab – what’s it for? What about a career in nanotechnology...? 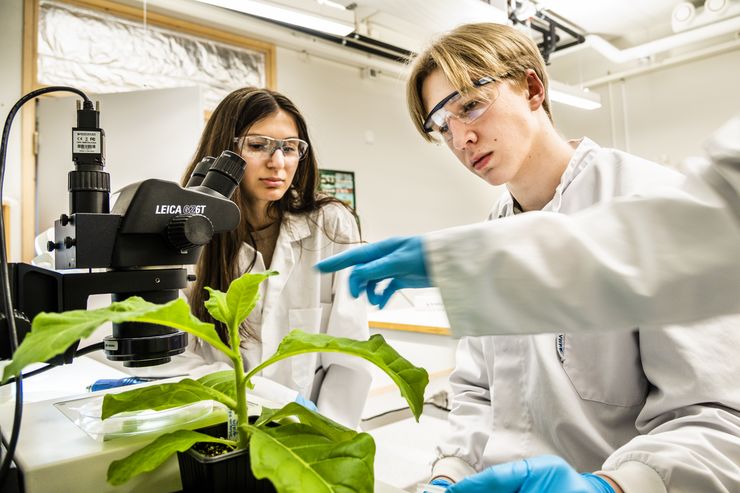 Six upper secondary pupils from the second year of the natural sciences programme at Hagagymnasiet in Norrköping have spent a day with researchers on Campus Norrköping. They were given a close-up view of how research is done – both in theory and in practice.

Caroline Paulis Najeeb and Jonathan Sjöman come closest: deep into the leaves of tobacco plants with an ion pump developed by the Laboratory of Organic Electronics at LiU. 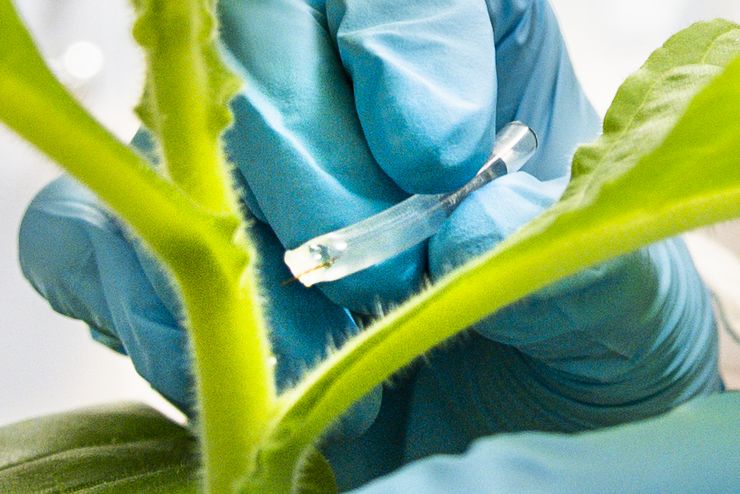 “One of the aims of making the tiny pinpricks is to understand how and when plants give off water vapour during photosynthesis. In this way, we hope that we can help plants to withstand drought”, says researcher Iwona Bernacka Wojcik.

“It’s great to get out of school and see the next step along the pathway, to know how researchers work. And I didn’t know much about electronic plants”, says Jonathan.

“It’s extremely useful to see current technology”, classmate Caroline Paulis Najeeb adds. “My dad’s an engineer and he has inspired me. I’ll probably end up an engineer as well.”

They point out that closeness to the university may be a decisive factor in deciding where to study. “Since we live here in Norrköping, it’ll be easier if we study here.”

With patience and certain amount of fiddling, they each prime a tiny ion pump and inject fluid into the plant.

Lejla Vidinlic and Linnea Lindh get an introduction to the field of physical electronics and nanotechnology from Rania Elhadi Adam, and discuss the science on show. The intention is to develop a purification process for water that has become contaminated when dyeing textiles.

After fika, the pupils move into the clean room where the air is extremely clean, allowing scientists to work here without particles affecting the experiments.
They pass through a sluice and step over a limiting barrier to the clean side where they are given white lab shoes. Then a lab coat, hairnet and protective goggles, which are particularly important since we are dealing with fluids and powders that may be harmful.

Rania’s research group is using a chemical low-temperature method to create zinc oxide nanoparticles. Large scale manufacture of these may be able to deal with large volumes of water in Asia, for example.

“It’s really interesting. I sort of imagined that scientists spend most of their time writing reports, but now I realise that they do loads of other stuff”, says Linnea Lindh.

Photo credit THOR BALKHED
Lejla Vidinlic with one of the stages
in the water-purification process“This is amazing. I didn’t think that we would be allowed into the lab”, says Lejla Vidinlic. “Just imagine being able to do one experiment after another. Working with this sort of thing must be great.”

She says that she understands most of the science:

“We’ve studied redox reactions quite a bit in school, although at a completely different level than they do here.”

Lejla is thinking about becoming a doctor, or taking a master’s degree in biochemistry.

“Linköping University has these programmes, so I’ll probably choose to study here. 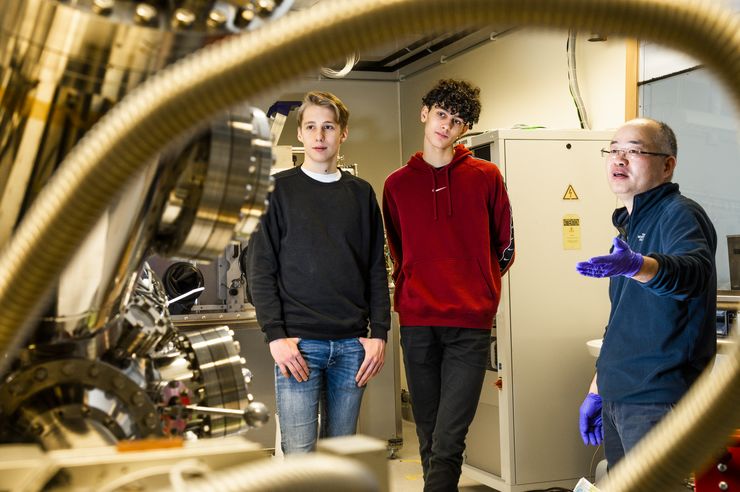 Jacob Hadi looks into the mirror and finally gets all his hair into the hairnet.

Together with his friend Jonas Andersson he’s just leaving the chemistry lab, where the complicated machines are being installed after being moved from Campus Valla. The guided tour of the clean room is now taken over by research engineer Xianjie Liu.

“This is a bit more impressive than the lab at school”, says Jacob 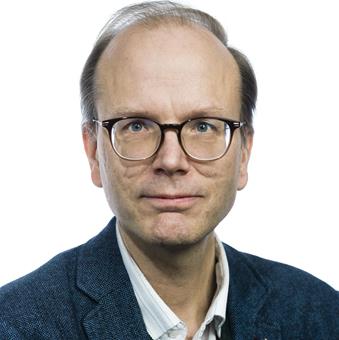