Basic science on which everything rests 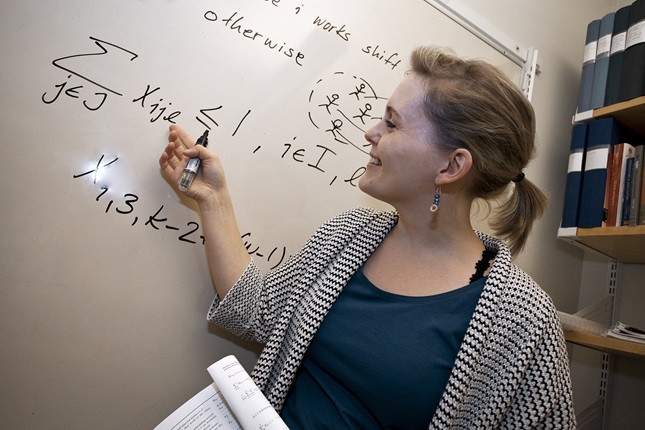 Mathematics is the foundation of not only technical development but also our understanding of, for example, biological, medical, sociological and economic systems. Research at LiU is focussed into fundamental mathematical research, optimisation, applied mathematics, computational mathematics, mathematical statistics, and teaching methods in mathematics.

These fields of mathematics are applied throughout the whole of science, within the natural sciences, medicine, economics and technology. Our focus in fundamental research, however, is often on fundamental scientific questions, with the aim of deepening understanding and developing modern mathematics. The deeper understanding contributes subsequently to many future applications, some of them whose nature is today completely unknown.

Optimisation treats complex decision-making systems with many variables, which makes them difficult to solve. New algorithms and mathematical models are required for truly intractable problems. Applications are found within everything from scheduling and the optimisation of snow ploughing, to planning electrically operated public transport and placing unmanned flying vehicles in communication networks.

Mathematical statistics deals with, for example, multivariate normal distributions in which a model for the expected value (the mean value if an experiment is carried out an infinite number of times) is available, together with a matrix of values that varies in a predictable manner. The methods developed can be applied in many areas in biology, medicine, sociology, technology and economics.
The theory of random number matrices is another field studied. Random number matrices can be used as tools in fields such as financial mathematics, theoretical physics and wireless communication.

Within computational mathematics LiU researchers work with, among other things, time-dependent partial differential equations. These are highly significant in, for example, the simulation of turbulence around aircraft and in simulations in which certain initial conditions are poorly known. One example of application is the design of aircraft, where it is necessary to deliver a simulation with a given, very small margin of error.

Mathematics research is also carried out within areas such as how to use ever-improving methods and models to calculate population growth and magnitude, together with the risk of species extinction and ecological collapse. Researchers are also working to model the human blood stream completely, including the blood vessel walls and the effects of surrounding muscle.

Mathematical teaching theory is a research area in which researchers examine new aids such as tablet computers for teaching maths in special needs schools, and educational methods for children various physical disabilities.

The research group is mainly interested in analysis on metric spaces, and in particular nonlinear potential theory associated with p-harmonic functions and quasiminimizers in Euclidean and metric spaces.

Optimization Aims at Finding the Best Solutions to Difficult Problems

Activities in society and industry must be based on good decisions to be efficient and economical. Optimization is about identifying, formulating and solving large, complex problems.

Mathematical models of the circulatory system can be used in order to better understand the system and so help diagnose blood-vascular diseases and other problems while also enabling planning for the treatment of these diseases.

Well-posedness of the governing partial differential equations lead to effective and accurate numerical methods for the analysis of physical processes in science and engineering.

The Department of Mathematics offers a doctoral programme for students with a strong mathematical interest who are interested to apply mathematics on practical problems in different fields such as engineering, business, computer science and industry.

This project will Basic arithmetic and numerical skills are in focus.

Differential equations describe many real-world phenomena but can rarely be solved exactly. We therefore study properties of their solutions in other ways, in very general situations, similarly to creating an identikit of an unknown criminal.

In this research project, we are developing mathematical models and solution methods for difficult problems in scheduling and resource allocation.

Common statistical methods used to analyse brain activity through images taken with MRI scanners cannot be trusted, as shown by Anders Eklund and Hans Knutsson of Linköping University, in the highly-ranked journal PNAS.

Mathematician Joseph Nzabanita from Rwanda was awarded the Cramér Prize in 2016 for his thesis in mathematical statistics. He took his doctorate at Linköping University in 2015.

LiU Professor of Mathematics Jan Nordström is the only Swede participating in an EU-funded research project whose goal is to provide more certain and more robust simulations in the construction of aircraft.

How do children learn to understand mathematics? And what is the best way for teachers to support them? These questions are being asked directly in the classroom where a LiU researcher is working together with teachers. Children need to be given time to think about their mathematics.