Developing countries are exempted from emission reductions commitments under the UN Framework Convention on Climate Change (UNFCCC). At the UNFCCC conference in 2007, however, it was agreed that they should, albeit voluntarily, reduce emissions through so-called Nationally Appropriate Mitigation Actions (NAMAs). Although NAMAs can be domestically supported, most NAMAs seek international supported from developing countries. Implementation therefore hinges on the matching of NAMA proposals with support. This project studies the practices of matching AMA proposals and support, how these NAMAs can be designed to attract support and how matching can become more effective.

The NAMAs (Nationally Appropriate Mitigation Actions by developing countries) were founded at the UN Climate Change Conference in Bali in 2007. In the previous agreements, developing countries were exempted from the commitments to reduce emissions. NAMAs are an attempt to encourage voluntary emission reductions in these countries by linking them to measurable, reportable and verifiable support from developed countries. Any developing country can formulate concrete NAMA proposals or concept notes and, if desired, seek support for its preparation or implementation. This may involve merely financial support, but also technology transfer and capacity building.

The research project investigates what is needed in order for NAMAs to contribute to low carbon development, but also how the interaction between in country developers of NAMAs and support providers can become more effective. The project examines how NAMAs are designed and interpreted in five countries with different economic development (Brazil, South Africa, India, Chile and Tanzania). The project also analyzes the institutional conditions for effective interaction between internationally coordinated action and national diversity of initiatives and support measures. Several research institutes collaborate in the project, including the New Climate Institute for Climate Policy and Global Sustainability in Cologne and Berlin as well as Alberto Luiz Coimbra Institute for Graduate Studies and Research in Engineering in Rio de Janeiro. 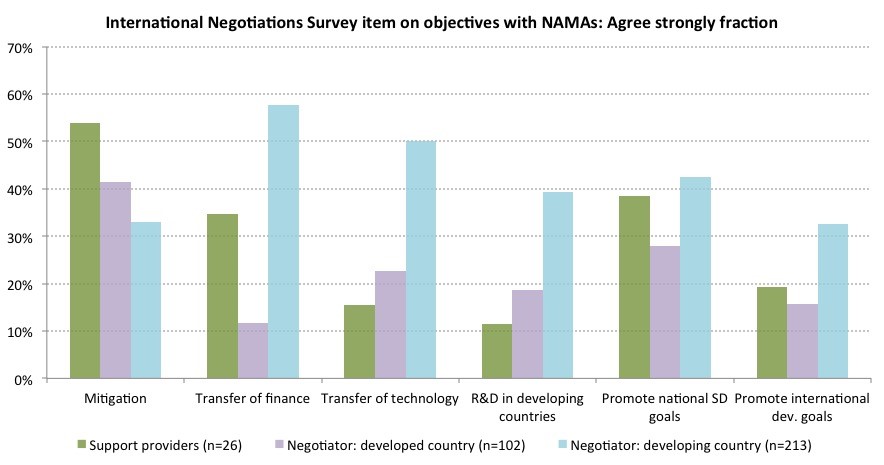 The picture shows how different actors (bilateral and multilateral supporters as well as negotiators from developing countries and industrialized countries) prioritize between different objectives with NAMAs. Priorities have been measured through a series of questionnaires in which participants were asked to agree or not agree about the importance of different objectives for NAMAs, where the image shows the fraction of respondents who answered “Strongly agree”.

Non-state actors, such as companies and organizations, participate in the UN climate negotiations in various steering groups and side events. This research program focuses on these types of activities and the impact they have.