When Parkinson’s disease is treated by electrical stimulation of the brain, huge amounts of data are produced. A group of researchers led by Professor Karin Wårdell of LiU will use these data to develop a visual aid for brain surgeons. 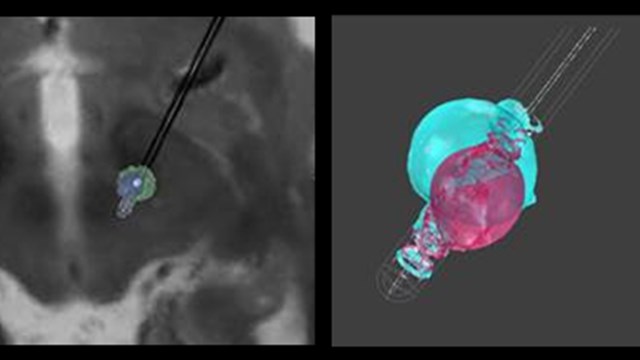 The project has been awarded SEK 21 million for five years from the Swedish Foundation for Strategic Research (SSF).

“The project has two aims: to develop a tool that can be used in clinical treatment, and to deepen our understanding of the mechanisms that underlie certain diseases,” says Karin Wårdell.

“Big data” is the common name used for the huge quantities of data that have become increasingly important in research. Data from different sources can be cross-referenced and then subjected to large-scale data analysis to reveal connections and provide an overall picture in a way that has not previously been possible.

Around 20 patients undergo surgical implantation of electrodes at Linköping University Hospital each year. The researchers expect the number to increase and believe that the method will be able to help more patients in the long term.

Depending on the disease in question, different structures in the brain must be stimulated to obtain the desired effect.

“It’s important to place the electrodes in the right places and to set the various parameters correctly. If everything is done correctly, deep stimulation of the brain can give excellent results. If the electrodes are placed slightly wrongly, however, the patient may experience adverse effects such as speech problems, disturbed vision or effects on the facial muscles,” says Karin Wårdell, professor in the Department of Biomedical Engineering (IMT) and leader of the project.


An atlas of the brain

The researchers in the project will carry out patient-specific computer simulations of the extent of the electrical field. They will match the simulation to images taken of the brain of the particular patient, together with the locations of the electrodes and their parameters. After the procedure, doctors and nurses will analyse the effect of the treatment on the clinical symptoms.

“We want to present all of the data collected from images, simulations and clinical follow up visually for the doctors and nurses. Our goal is to create an atlas of the brain using statistical methods to determine the optimal locations for the electrodes in the various conditions that we want to treat,” says Karin Wårdell.

The researchers hope that the project will make it easier for the doctors to finely adjust the electrode positions and in this way keep adverse effects to a minimum.

Deep brain stimulation has also been tested in research studies of other diseases including Tourette’s syndrome, obsessive-compulsive disorder and other psychiatric conditions. In these cases, further knowledge about how to place the electrodes is needed in order to obtain good results. The research project now being started will include studies of deep stimulation of the brain in refractory Tourette’s syndrome, in order to gain a better understanding of the mechanisms behind the disease, and possibly develop better treatments.

The research project will be led by scientists at LiU and is one of seven projects with a total five-year budget of SEK 200 million. This is part of the SSF initiative in research into “big data” and computational sciences. Karin Wårdell has worked on the idea for the project for several years in collaboration with Simone Hemm-Ode, professor at the University of Applied Sciences and Art Northwestern Switzerland and guest researcher at IMT. Other participants in the project include researchers and doctors at Harvard Medical School, University College London and Linköping University Hospital.