High risk of diabetes yet healthy – why?

Not all of the children who run an increased risk of developing type 1 diabetes actually develop the disease. Why is this? Researchers at LiU are studying the immune defence in detail, attempting to find out more about the mechanisms behind the disease and possible treatments. 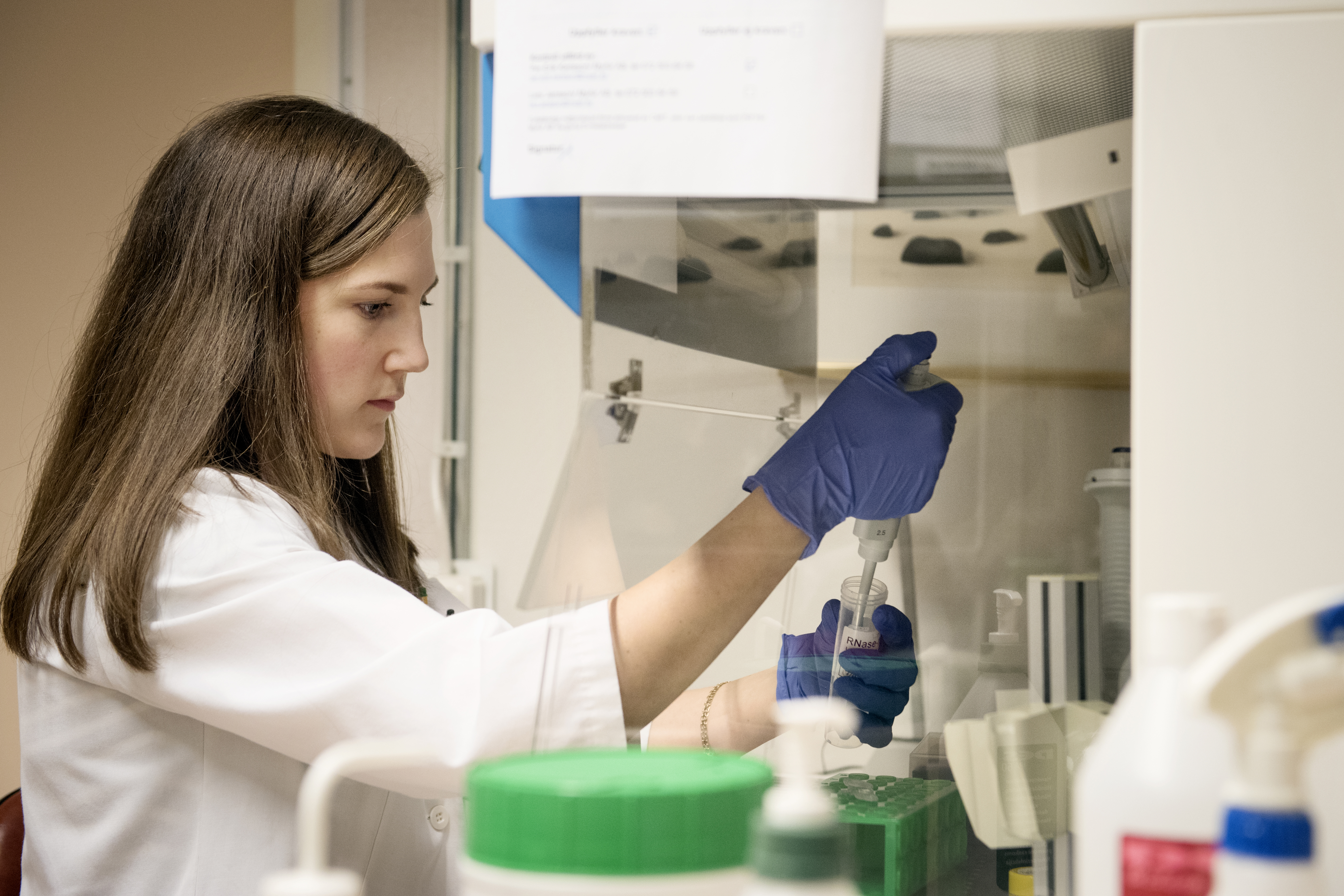 Linda Åkerman prepares an extraction of DNA from cells. Photo credit: Kajsa JuslinWhen the first symptoms of type 1 diabetes appear, the process has already been under way for some time, unnoticed. Even before a person becomes ill, it is often possible to find in their blood antibodies directed against natural substances in their body. These are known as “auto-antibodies”, and their presence is a sign that the immune system has started to destroy the insulin-producing cells in the pancreas. People who have several different diabetes-related auto-antibodies are at an increased risk of developing the disease in the future.

What is really happening during this invisible civil war in the body, before symptoms appear?

ABIS (All Babies in Southeast Sweden) is a large study being carried out under the leadership of Johnny Ludvigsson, in which 17,000 children have been followed from birth. These children have all provided blood samples. Linda Åkerman’s doctoral project at LiU has involved following a group of children from ABIS who ran a higher risk of developing type 1 diabetes. Of the 46 children who had several different auto-antibodies, approximately half developed clinical diabetes before the age of eleven years. Those who were still healthy but were believed to run a higher risk of developing the disease continued to provide blood samples for two years. 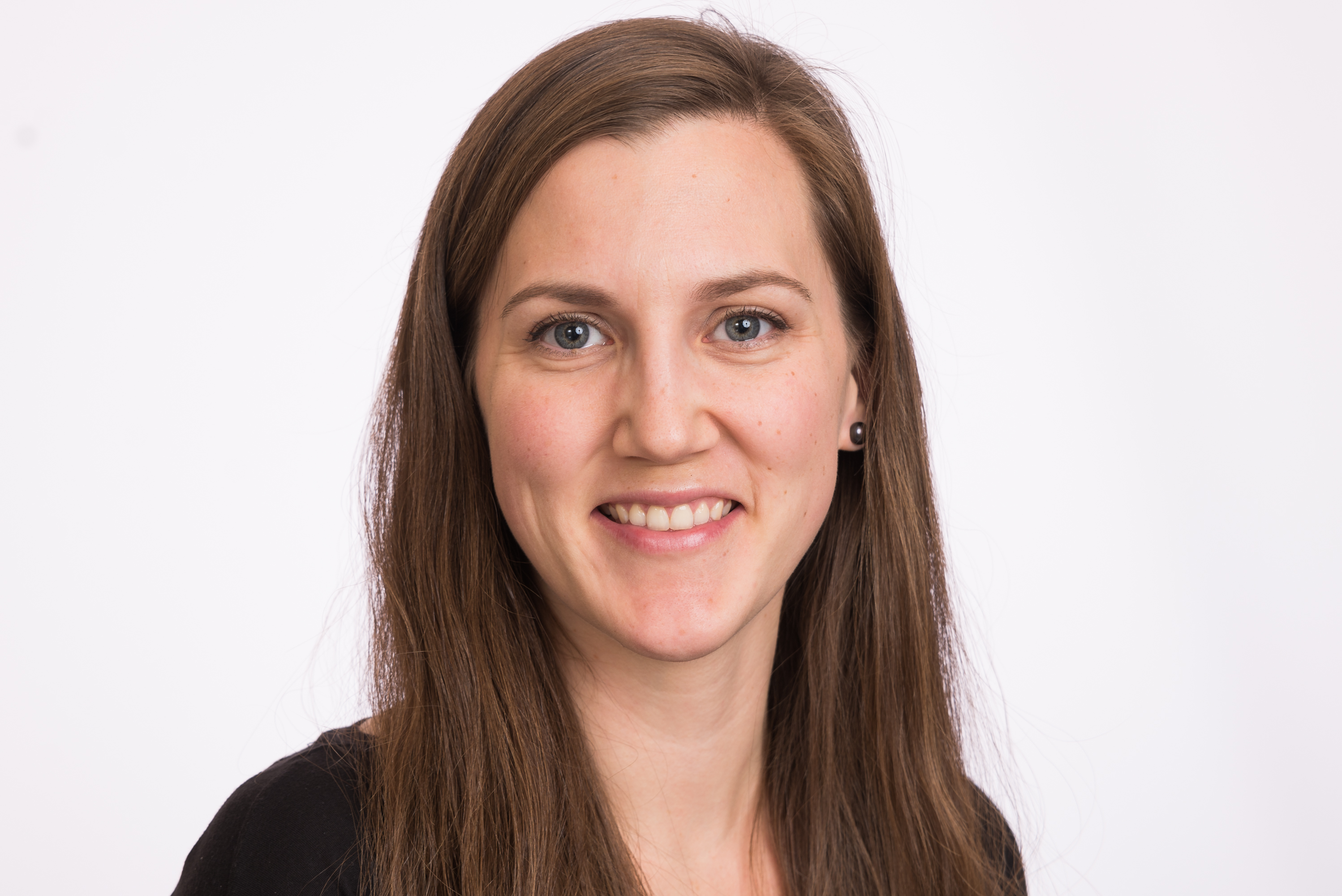 “Some of these children developed type 1 diabetes during the study, while others were diagnosed some time after the follow-up period. Some still haven’t developed the disease, and even if they are at a higher risk for diabetes, we don’t know for sure whether all of them will actually develop the disease,” says Linda Åkerman.

“This is why we believe that it is important to study this particular group of children, since they are drawn from the general population in Sweden, rather than being selected due to their family background,” says Linda Åkerman.

The research group noticed that the children who developed diabetes seemed to have higher levels of two auto-antibodies, IA2A and ZnT8A, than children who remained healthy. Other studies have also suggested that these auto-antibodies indicate a particularly high risk for developing diabetes, and the research group believes that it is important to determine whether this is true for risk groups from different populations. Such information may be useful in clinical studies that aim to prevent type 1 diabetes, in order to be able to determine how high the risk is that a participant will develop diabetes. 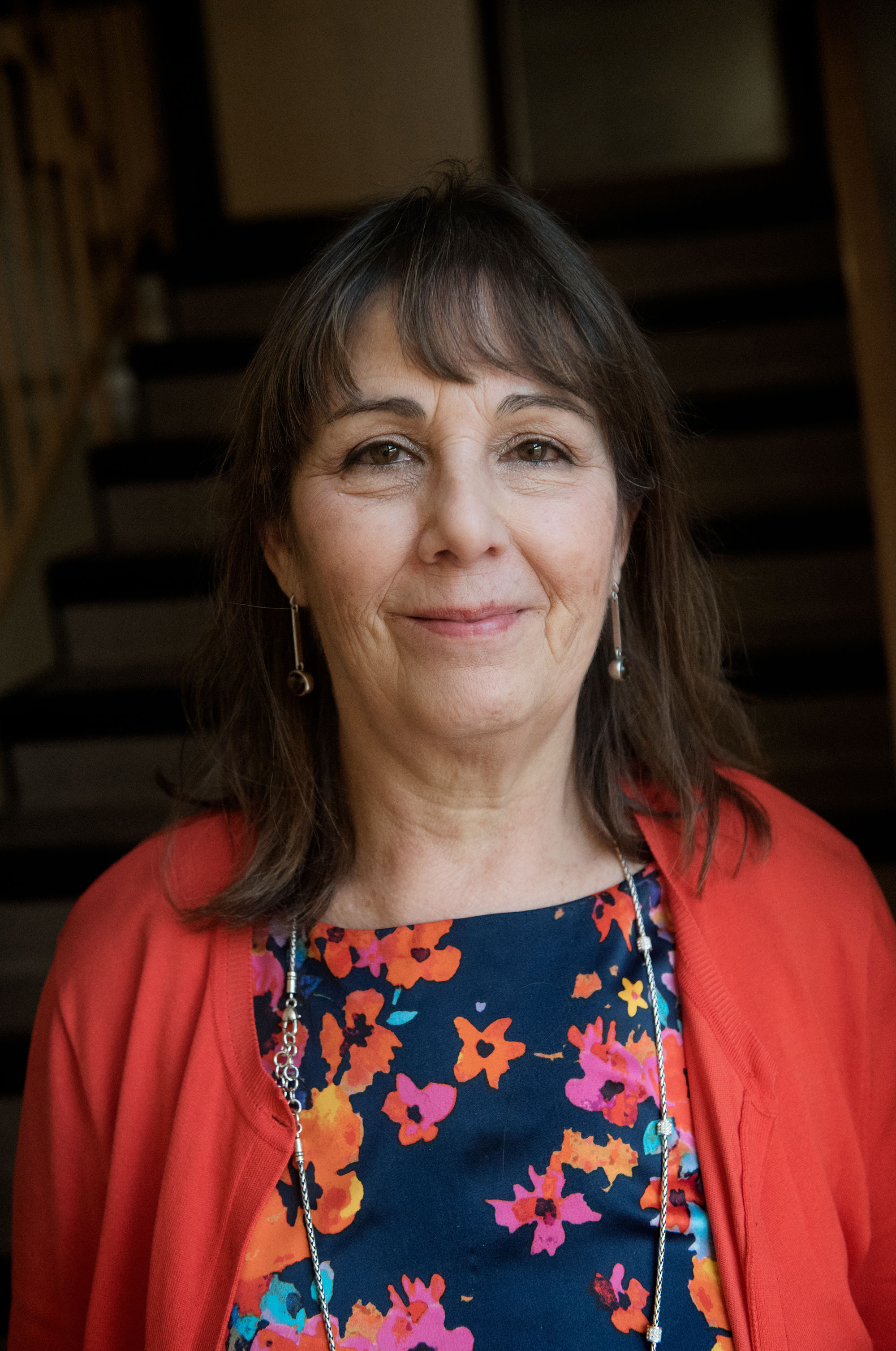 Rosaura Casas wants to know what happens in the body before symptoms of diabetes type 1 arise. Photo credit: Kajsa Juslin

LiU researcher, and one of Linda Åkerman’s PhD supervisors, Rosaura Casas says that it is important to determine why some children with an increased risk actually become ill, while others have still not developed diabetes after ten years, despite having these auto-antibodies in their blood.

“We want to understand what is happening in the body during this period. Is there a time window here when it would be possible to stop the disease developing?”

This is, of course, a crucial question in diabetes research: Is it possible to find a way to stop or reduce the way in which the immune system attacks insulin-producing cells? Several clinical studies are in progress in Sweden, principally in Linköping, in which researchers are testing new treatments for people who have recently developed type 1 diabetes. One such study is the DIAGNODE study. It is hoped that it will be possible in the long term to preserve insulin production before it completely disappears. Rosaura Casas and other members of the research group are investigating blood samples from patients who are participating in several treatment studies. They are particularly interested in different sorts of immune cells, or white blood cells, and how they communicate with each other. 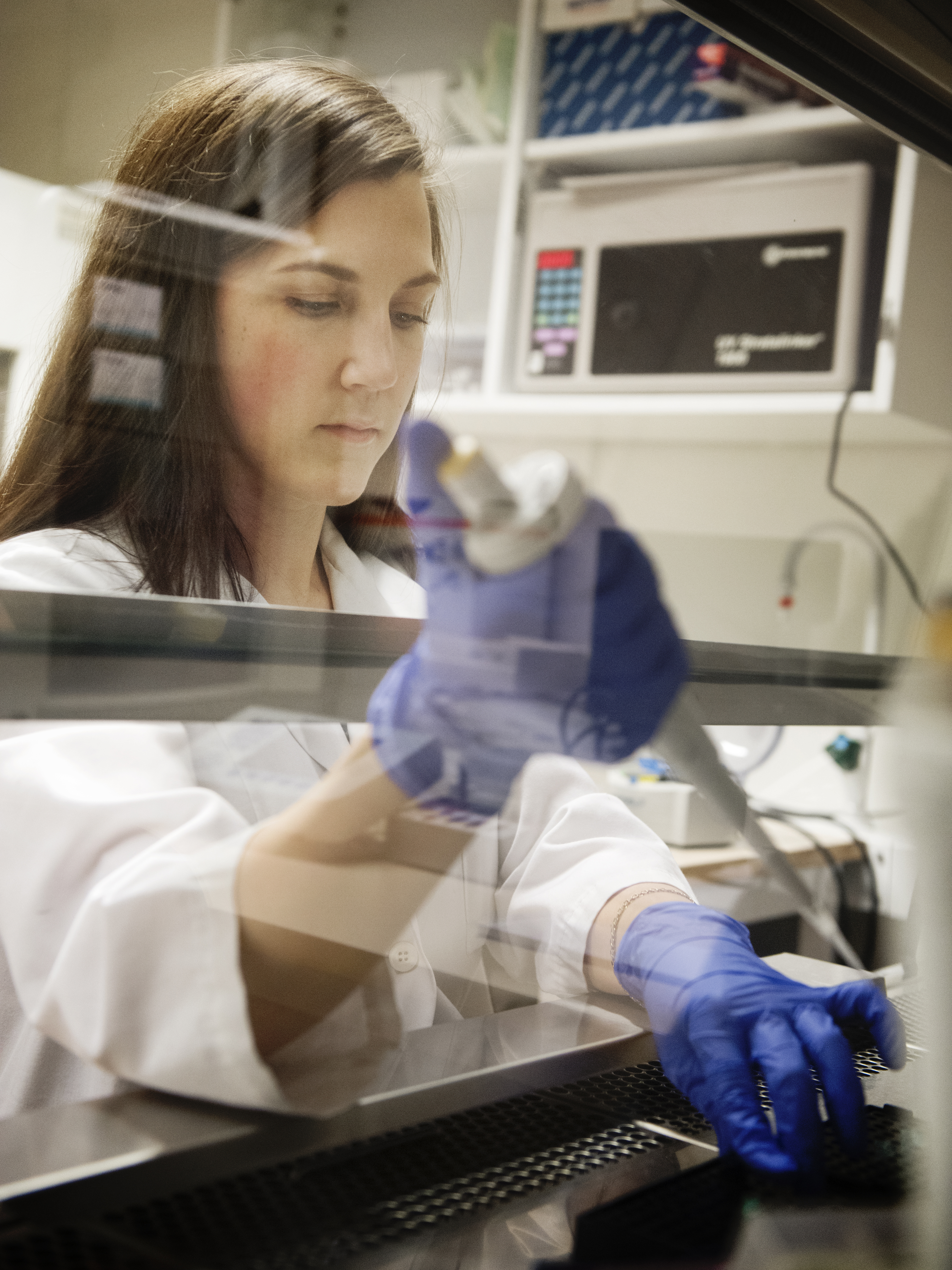 
Does one size fit all?

One thing the researchers are looking for are markers that can show at an early stage whether a person is responding to treatment or not. But the research is also attempting to determine whether the effects of treatment are influenced by differences between different patient’s immune systems. Different patients have, for example, different auto-antibodies, and Rosaura Casas believes that these differences are important.

“It has been generally accepted in diabetes research that all patients respond to the treatment being tested. But the immune systems of people who develop diabetes can be very different. The idea is growing that one treatment may not necessarily be appropriate for all patients. I suspect that in the future we will work in the way they do in cancer treatment, where several different treatments are often combined.”

This article has also been published in Forskning & Utveckling 1/2017, a magazine by the Faculty of Medicine and Health Sciences at LiU and Region Östergötland. 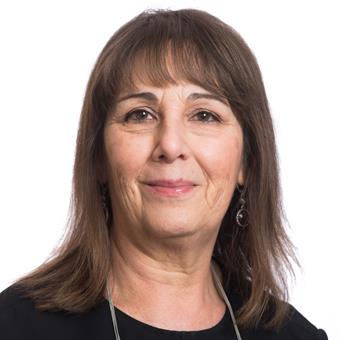 A bridge between researchers and people who are affected and may need the results of research. Told in a personal way that touches people. These are the ideas behind the Fakultet podcast, published by the Faculty of Arts and Sciences.

A small guest molecule in the right place makes it possible to produce energy-efficient organic solar cells using eco-friendly solvents. A record efficiency over 17% is demonstrated. In addition, solar cells with larger areas can be produced.

Four researchers at Linköping University (LiU) have been included on a list of the world’s most cited academics. The list has been put together by the company Clarivate. Every year, Clarivate uses this list to celebrate influential researchers.

Markus Heilig - a professor with a voice

Discussions with his daughters inspired him to write a book in popular science: Hon, han och hjärnan. And last autumn he played a major role in a series on Swedish TV: Från savannen till Tinder. “I love telling stories”, says Markus Heilig.

How do pollutants and other chemicals that we are exposed to affect our health? Researchers have applied a method to identify the proteins affected by chemicals. It can be used to discover at an early stage whether a substance has biological effects.

Photon-counting helps both patients and researchers

One of the world’s first photon-counting computed tomography imaging devices has been installed in the Center for Medical Image Science and Visualization (CMIV) at Linköping University Hospital.

The Swedish Research Council has granted funding for two projects as feasibility studies for future instruments at ESS, the world's most powerful research facility for neutron radiation. Researchers at LiU will develop neutron optics.

Seven out of every hundred children do not learn their mother tongue as expected. Christina Reuterskiöld, newly appointed professor of speech and language pathology at Linköping University, is investigating how language develops in children.

Some people who have recovered from COVID-19 have experienced long-term problems with their eyes. But why? And can this phenomenon be measured using biological markers? These are questions that researchers will try to answer in a new project.

Dylan Mäenpää is one of this year’s Christer Gilén scholarship recipients. He receives the award for his degree project in computer science. Dylan developed a new machine learning method that can be of use in innovative areas within healthcare.

Ligna Energy AB, a spin-off from Linköping University, has been nominated as winner of one of the two innovation awards in the Startup 4 Climate competition. The announcement was made at the recently concluded COP 26 in Glasgow.

What are the obstacles to digitalisation for established companies? How can they overcome these difficulties? Sandra Sjöbäck and Amanda Spaak have answered these questions, and as a result have been awarded one of Christer Gilén scholarships.

Newly recognized crossover testimonies give important knowledge of the Holocaust

A collection of Holocaust testimonies in Sweden includes cases in which Jewish and non-Jewish Polish survivors interviewed each other. A history of conflict stood between the survivors, but this does not appear to have influenced the testimonies.

How is your liver doing? Decades of research into the use of magnet resonance imaging is now being put to work to gain information about patients’ livers – without needles.

Media review of major incidents can save lives

Any incident with many casualties places stress on the medical care system. LiU researchers have been able to review major incidents in Rwanda, Africa, using a new method.

A new literature on a changed planet

Disaster and endings. These are recurrent themes in literature over the centuries. But recently, apocalyptic books are appearing at an increasing pace, and some of them are taking on new forms. How do they depict a changing planet?

Climate policy must rest on two solid pillars. Not only are radical measures to cut down emissions required, but also long-term initiatives to adapt society to a changed climate. This is the conclusion of environmental scientist Sofie Storbjörk.

Torrential rain that causes flooding is bad, but if the floods cause landslides a disaster is looming. And how do you deal with forest fires in several places at the same time? These are examples of what a project will be looking at.

SEK 16.5 million to research in humanities and social sciences

Four researchers from Linköping University will receive grants in the Swedish Research Council’s latest funding round.

64 million SEK for research in the natural sciences and technology

Seventeen researchers working in technology and the natural sciences at Linköping University have been awarded 64 million Swedish kronor in the form of research grants from the Swedish Research Council.