Profitable collaboration – for farmers and the environment

More biogasCollaboration is taken for granted in Kalmar. Several farmers north of Kalmar had their curiosity aroused by biogas and started a study group. This led to a project to investigate whether it could be economically justified to produce vehicle fuel in a joint facility.

The More Biogas Småland company was established, and clear objectives laid down: the gas must be sold before construction started, the economy must be sound, and capital must be available.
The construction of a biogas facility in Mosekrog, 10 km north of Kalmar, started in 2013, in premises that had previously been home to Läckeby Water. Eighteen farmers are joint-owners of the plant, together with the Kalmar company Purac AB, Almi Invest, Kalmar Energi and some private individuals. 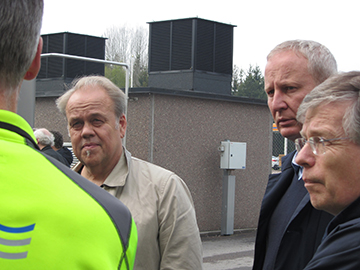 Mats Eklund, LiU, Krister Thulin, Scania and Mats Söderström, LiUThe raw material is chicken, pig and cattle manure from the farms, slaughter offal, and food waste from neighbouring municipalities. The farms are located at an average distance of 7.5 km from the facility. Sanitised fertiliser is returned to the farms, while E.ON takes the gas. The biogas is upgraded to vehicle fuel on site, and sold at several locations, including a vehicle filling station next to the facility. More Biogas has a capacity of just over 4 million m3 vehicle fuel per year.

An operating company was formed in the spring of 2015 to operate More Biogas and Kalmar Biogas. This company coordinates the selection of substrates and transport, in order to optimise operations. Puregas Solutions contributes personnel to the operating company, while the facility at Mosekrog houses also a laboratory in which the processes are followed.
More Biogas has been making a profit for the past few years.

But it’s clear that there are problems to overcome, one of which arises from the fact that the animals are allowed to feed freely in the open:
“We had to remove 300 tonnes of stones and gravel from the reactor. This demands a high level of commitment from the joint-owners,” Gunnar Bergström, process engineer at More Biogas, concludes.